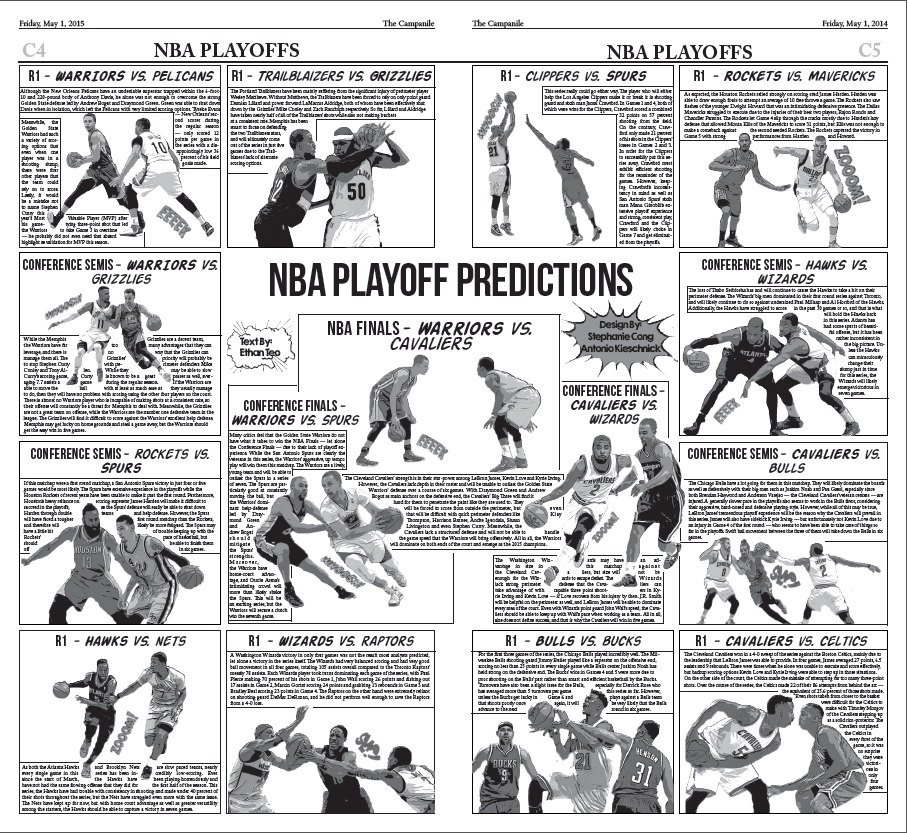 Although the Pelicans have an undeniable superstar trapped within the 6-foot-10 and 220-pound body of Anthony Davis, he alone was not enough to overcome the strong Golden State defense led by Andrew Bogut and Draymond Green. Green was able to shut down Davis when in isolation, which left the Pelicans with very limited scoring options. Tyreke Evans — New Orleans’ second scorer during the regular season — only scored 12 points per game in the series with a disappointingly low 36 percent of his field goals made. Meanwhile, the Warriors had such a variety of scoring options that even when one player was in a shooting slump, there were four other players that the team could rely on to score. Lastly, it would be a mistake not to name Stephen Curry this year’s Most Valuable Player (MVP) after his game-tying three-point shot that led the Warriors to take Game 3 in overtime — he probably did not even need that absurd highlight as validation for MVP this season.

This series really could go either way. The player who will either help the Clippers make it or break it is shooting guard and sixth man Jamal Crawford. In games 1 and 4, both of which were wins for the Clippers, Crawford scored a combined 32 points on 57 percent shooting from the field. On the contrary, Crawford only made 21 percent of his shots in the Clippers’ losses in games 2 and 3. In order for the Clippers to successfully put this series away, Crawford must exhibit efficient shooting for the remainder of the games. However, keeping Crawford’s inconsistency in mind as well as Spurs’ sixth man Manu Ginobili’s extensive playoff experience and strong, consistent play, Crawford and the Clippers will likely choke in game 7 and get eliminated from the playoffs.

As expected, the Rockets relied strongly on scoring stud James Harden. Harden was able to draw enough fouls to attempt approximately 10 free throws a game on average. The Rockets also saw flashes of the younger Dwight Howard that was an intimidating defensive presence. The Mavericks struggled to execute due to the injuries of their best two players, Rajon Rondo and Chandler Parsons. The Rockets let Game 4 slip through the cracks mostly due to Harden’s lazy defense that allowed Monta Ellis of the Mavericks to score 31 points, but Ellis was not enough to make a comeback against the second seeded Rockets. The Rockets captured the victory in Game 5 with strong performances from Harden and Howard.

As both the Hawks and Nets are slow paced teams, nearly every single game in this series has been incredibly low-scoring. Ever since the start of March, the Hawks have been playing horrendously and have not had the same flowing offense that they did for the first half of the season. This series, the Hawks have had trouble with consistency in shooting and made under 40 percent of their shots throughout the series, but the Nets have struggled even more with the same issue. The Nets have kept up for now, but with home court advantage as well as greater versatility among the starters, the Hawks should be able to capture a victory in seven games.

A Wizards victory in only four games was not the result most analysts predicted, let alone a victory in the series itself. The Wizards had very balanced scoring and had very good ball movement in all four games, totaling 105 assists overall compared to the Raptors’ measly 78 assists. Each Wizards player took turns dominating each game of the series, with Paul Pierce making 70 percent of his shots in Game 1, John Wall scoring 26 points and dishing out 17 assists in Game 2, Marcin Gortat scoring 24 points and grabbing 13 rebounds in Game 3 and Bradley Beal scoring 23 points in Game 4. The Raptors on the other hand were extremely reliant on shooting guard DeMar DeRozan, and he did not perform well enough to save the Raptors from a 4-0 loss.

For the first three games of the series, the Bulls played incredibly well. Bulls shooting guard Jimmy Butler played like a superstar on the offensive end, scoring no less than 25 points in every single game while Bulls center Joakim Noah has held strong on the defensive end. The Bucks’ wins in games 4 and 5 were more due to poor shooting on the Bulls’ part rather than smart and efficient basketball by the Bucks. Turnovers have also been a slight issue for the Bulls, especially for Derrick Rose who has averaged more than 5 turnovers per game this series so far. However, unless the Bucks get lucky in Game 6 and plays against a Bulls team that shoots poorly once again, it will be very likely that the Bulls advance to the next round in six games.

The Cavaliers won in a 4-0 sweep of the series against the Celtics, mainly due to the leadership that LeBron James was able to provide. In four games, James averaged 27.0 points, 6.5 assists and 9.0 rebounds. There were times when he alone was unable to execute and score effectively, but backup scoring options Kevin Love and Kyrie Irving were able to step up in those situations. On the other side of the court, the Celtics made the mistake of attempting far too many three-point shots. Over the course of the series, the Celtics made 22 of their 86 attempts from behind the arc — the equivalent of 25.6% of those shots made. Even shots taken from closer to the basket were difficult for the Celtics to make with Timofey Mozgov of the Cavaliers stepping up as a solid rim-protector. The Cavaliers outplayed the Celtics in nearly every facet of the game, so it was no surprise that they emerged victorious in only four games.

While the Grizzlies are a decent team, the Warriors have far too many advantages that they can leverage, and there is no way that the Grizzlies can manage them all. The Grizzlies’ priority will probably be to stop Stephen Curry with perimeter defenders Mike Conley and Tony Allen. While they may be able to slow Curry’s scoring game, Curry is known to be a great passer as well, averaging 7.7 assists a game during the regular season. If the Warriors are able to move the ball with at least as much ease as they usually manage to do, then they will have no problem with scoring using the other four players on the court. There is almost no Warriors player who is incapable of making shots at a consistent rate, so their offense will constantly be a threat for Memphis to deal with. Meanwhile, the Grizzlies are not a great team on offense, while the Warriors are the number one defensive team in the league. The Grizzlies will find it difficult to score against the Warriors’ excellent help defense. Memphis may get lucky on home grounds and steal a game away, but the Warriors should get the easy win in five games.

If this matchup were a first round matchup, a Spurs victory in just four or five games would be most likely. The Spurs have extensive experience in the playoffs while the Rockets of recent years have been unable to make it past the first round. Furthermore, Houston’s heavy reliance on scoring superstar James Harden will make it difficult to succeed in the playoffs, as the Spurs’ defense will easily be able to shut down Harden through double teams and help defense. However, the Spurs will have faced a tougher first round matchup than the Rockets, and therefore will likely be more fatigued. The Spurs may have a little bit of trouble keeping up with the Rockets’ pace of basketball, but should be able to finish them off in six games.

The loss of Thabo Sefolosha has and will continue to cause the Hawks to take a hit on their perimeter defense. The Wizards’ big men dominated in their first round series against Toronto, and will likely continue to do so against undersized Paul Millsap and Al Horford of the Hawks. Additionally, the Hawks have struggled to score in the past 30 games or so, and that is what will hold the Hawks back in this series. Atlanta has had some spurts of beautiful offense, but it has been rather inconsistent in the big picture. Unless the Hawks can miraculously change their slump just in time for this series, the Wizards will likely emerge victorious in seven games.

The Bulls have a lot going for them in this matchup. They will likely dominate the boards as well as defensively with their big men such as Joakim Noah and Pau Gasol, especially since both Brendan Haywood and Anderson Varejao — the Cavaliers’ veteran centers — are injured. A generally slower pace in the playoffs also seems to work in the Bulls favor, considering their aggressive, hard-nosed and defensive playing style. However, while all of this may be true, LeBron James’ tremendous playoff experience will be the reason why the Cavaliers will prevail in this series. James will also have sidekick Kyrie Irving — but unfortunately not Kevin Love due to an injury in Game 4 of the first round — who seems to have been able to take care of things so far in the playoffs. Swift ball movement between the three of them will ultimately take down the Bulls in six games.

Many critics feel that the Warriors do not have what it takes to win the NBA Finals — let alone the Conference Finals — due to their lack of playoff experience. While the Spurs are clearly the veterans in this series, the Warriors’ aggressive, up tempo play will win them this matchup. The Warriors are a lively, young team and will be able to outlast the Spurs in a series of seven. The Spurs are particularly good at constantly moving the ball, but the Warriors’ dominant help-defense led by Draymond Green and Andrew Bogut should mitigate the Spurs’ strengths. Moreover, the Warriors have home-court advantage, and Oracle Arena’s intimidating crowd will more than likely shake the Spurs. This will be an exciting series, but the Warriors will secure a clutch win the seventh game.

The Wizards may have an advantage in size in this matchup against the Cavaliers, but size will not be enough for the Wizards to escape defeat. The Wizards lack strong perimeter defense that the Cavaliers can take advantage of with capable three point shooters in Kyrie Irving and Kevin Love — if Love recovers from his injury by then. J.R. Smith will be helpful on the perimeter as well, and LeBron James will be able to dominate every area of the court. Even with Wizards point guard John Wall’s speed, the Cavaliers should be able to keep up with Wall’s pace when working as a team. All in all, size does not define success, and that is why the Cavaliers will win in five games.

The Cavaliers’ strength is in their star-power among LeBron James, Kevin Love and Kyrie Irving. However, the Cavaliers lack depth in their roster and will be unable to outlast the Warriors’ defense over a course of six games. With Draymond Green and Andrew Bogut as main anchors on the defensive end, the Cavaliers’ Big Three will find it hard for them to penetrate the paint like they are used to. They will be forced to score from outside the perimeter, but even that will be difficult with quick perimeter defenders like Klay Thompson, Harrison Barnes, Andre Iguodala, Shaun Livingston and even Stephen Curry. Meanwhile, the Cavaliers lack a structured defense and will not be able to handle the game speed that the Warriors will bring offensively. All in all, the Warriors will dominate on both ends of the court and emerge as the 2015 champions in six games.