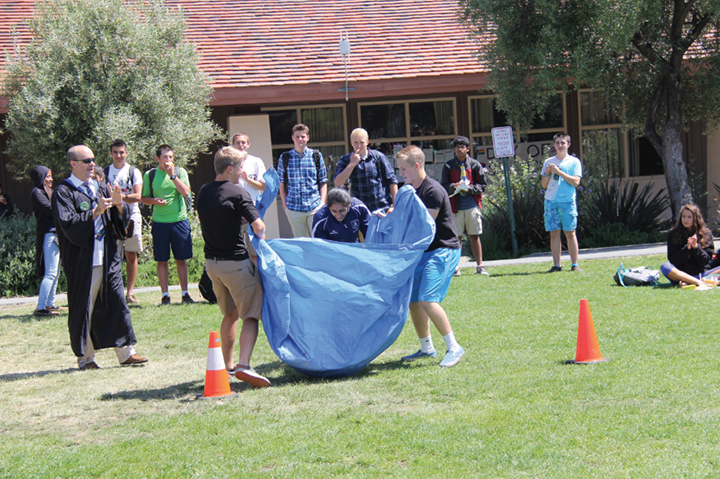 In an effort to increase inclusiveness, the Associated Student Body (ASB) has replaced the traditional powder puff flag football games with Hogwarts Week and Viking Best of the Best despite some student objections.

On April 24, ASB published a press release, in which it explained why powder puff is no longer an appropriate school activity.
“Powder puff has received a major makeover throughout this process,” the ASB executive council stated. “Philosophically, ASB believes in inclusion and allowing all students across campus a chance to participate in all ASB-sponsored events.”

“Powder puff is not happening this year because we don’t feel that it serves the Paly community in a way that we think is appropriate or progressive,” Ben-Efraim said.

Some students have welcomed the decision, as they also believe there are better alternatives.

“Powder puff was fun because we all got to watch sports,” junior Gabi Rossner said. “But the intention behind the event, which was to belittle women by calling the sport ‘powder puff’ and be like, ‘Look, girls can do sports too, how cute’, [was bad].” Previous powderpuff players find the supposed mysoginism of the event to be less than others have voiced.

“I don’t think [powder puff] was sexist,” junior Sophia Armitano, a powder puff player in 2013 and 2014, said. “I know that everybody in my grade at least enjoyed it.”
ASB’s decision came primarily out of the outdated nature of the event; however, there was one specific incident of Powderpuff exclusivity in 2014.
“Last year a boy asked to sign up for powder puff in all seriousness and we had to make the decision to not let him sign up, although none of us felt like we could justify our decision with anything but ‘tradition’,” Ben-Efraim said.

ASB’s new alternatives for the spring event include Viking Best of the Best, a week dedicated to sports activities (read more about this on A4), and Hogwarts Week.
“We are not necessarily replacing [powder puff] but we are adding new activities,” Ben-Efraim said.

Hogwarts Week began with the triwizard tournament, featuring beach ball levitation, a maze race, a flying sponge race and a polyjuice potion tarp race. The other main event consisted of teams of 20 to compete in quidditch under the standard rules popularized by college teams. After two years of pitching the idea, Ben-Efraim took the initiative this past year as senior class president and the response has been promising.

“This was not intended to be a second spirit week but it seems to be shaping up like a smaller one,” Ben-Efraim said.

However, according to Armitano, Hogwarts Week does not overcome the exclusivity that it attempts to surpass.

“Nothing is ever going to be fully inclusive,” Armitano said. “I am not a Harry Potter fan so I am not going to have a clue what’s going on, so that’s almost more exclusive.”