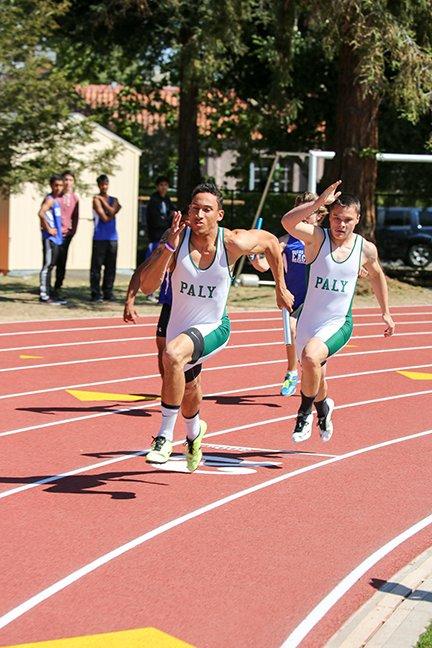 Inconsistent performances have been the bane of the Palo Alto High School’s track and field team this season. The team lost its recent meet against Los Gatos High School on April 23, with its boys and girls varsity teams losing 69-58 and 97-30, respectively. The Paly frosh/soph boys won 79-43, and girls junior varsity won 100-26, but it was not enough to escape defeat. The entire team was disappointed with its overall performance.

“It was a disappointing loss,” sophomore long-distance runner Naveen Pai said. “Although we lost, the score was close throughout the whole meet. I wanted to make a difference, but I didn’t run the race I was hoping for.”

Just one week before, the track and field team had uplifting results with decisive victories against Los Altos High School on April 16 in every division except for the frosh/soph boys category, winning the meet overall.

“We crushed them,” sophomore sprinter and long jumper Annalise Wang said. “Everyone performed really well all around.”

Paly track and field had a disappointing start to the season with a loss to rival Henry M. Gunn High School and a mediocre performance at the St. Francis Invitational. While results have been slightly more promising at times, Givens believes that the team has not reached its full potential yet.

“We’ve been doing better, but I think a lot of us could do even better than we are doing now,” Givens said.

The next meet will be the De Anza League (DAL) Trials on May 5 and May 7, where some Paly athletes may qualify for the Santa Clara Valley Athletic League (SCVAL) Finals. In preparation for the important upcoming competitions, Givens has set a few goals, both for himself and for the team.

“My goals are to just come in first at De Anza and SCVALs and also really focus on getting a good time for the CCS [Central Coast Section] seeding,” Givens said. “A lot of other athletes on the team have great potential to make it to CCS as well.”

Wang also sees the team succeeding at both the DAL trials as well as the SCVAL finals given the team’s previous successes and recent improvement.

“We’ve been doing better than we did last year,” Wang said. “At our next meets, we’re going to be amazing.”