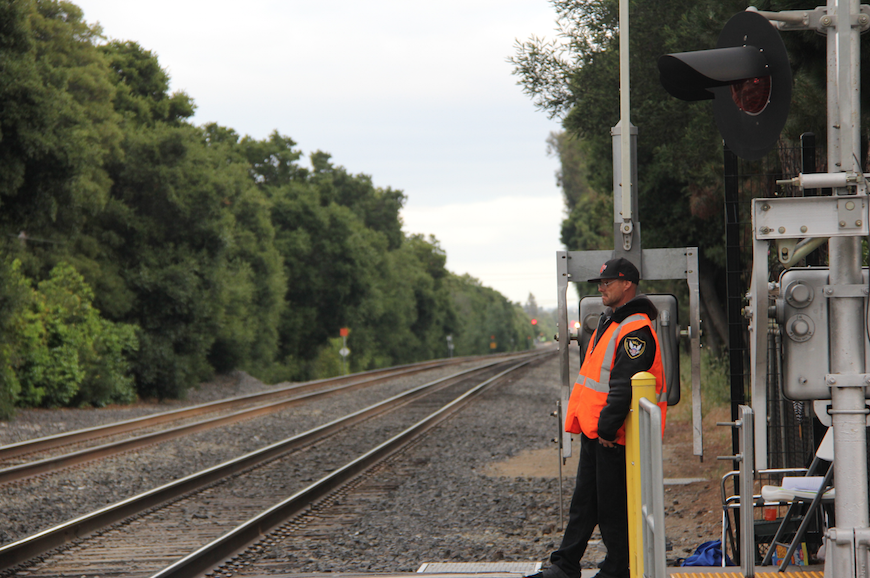 Current train overwatch relies on hired guards to patrol the train tracks. Cameras would help with the monitoring of the tracks.

Cameras to be installed near train

In light of recent suicides on the Caltrain tracks, Palo Alto city officials plan to test a new camera system that would alert guards of people on the tracks and improve guards’ visibility of the tracks.

The current system used to protect people on the tracks is a 4-year-old program called Track Watch. Track Watch is a private security firm hired by the Palo Alto Police Department that places security guards by the tracks everyday for the hours that Caltrain has trains running. However, in the event that someone steps on the tracks while the trains are running, these guards are not permitted to physically pull people off of the tracks — this can only be performed by public safety officials.

After increasing the fencing around the tracks and putting Track Watch into effect, city officials hope that the $30,000 autonomous camera project will prevent additional deaths involving the Caltrain tracks. According to the Caltrain suicide prevention website, there is an average of 12 suicides by Caltrain per year. This year alone, there has already been nine fatalities, not all intentional, reported for the Caltrain system.

Implementing a new automated camera system will extend visibility of the tracks and also notify guards of anything or anyone on the tracks in a more timely manner. The cameras will be able to alert guards the moment an individual steps onto the tracks. In addition, the new surveillance method will have the ability to detect cars that are stalled or stuck on the tracks. This will ensure that public safety officials have enough time to arrive at the Caltrain tracks in order to resolve possible issues.

“I think that the idea is great and is a step forward in the right direction,” Gunn junior Kathleen Ji said. “It may also deter people from committing suicide at the tracks if they know that they will be watched.”

“However, I also think that the response time will not be quick enough to stop anyone from committing suicide,” Ji said. “If someone knew exactly what they wanted to do, they’d be able to jump before anyone could respond to the video. I do applaud the city’s efforts though; this is definitely a step in the right direction.”