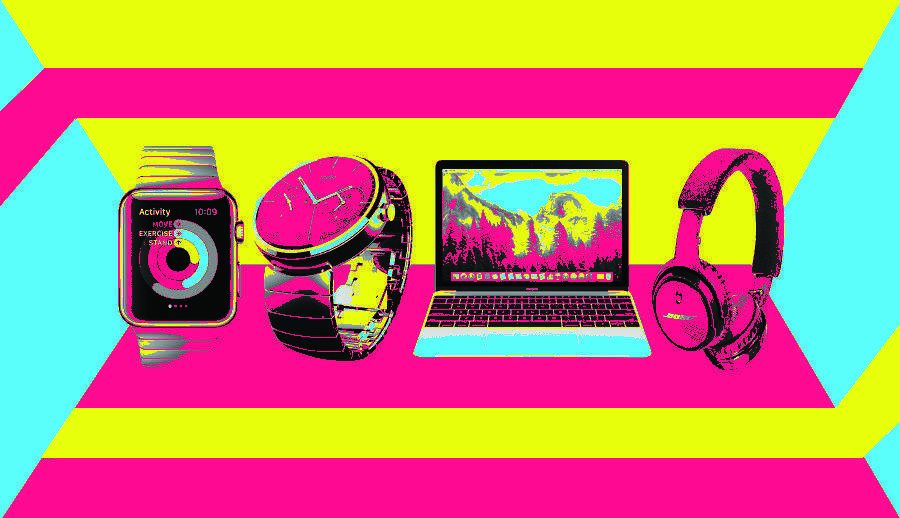 Technology has in some way been introduced to every aspect of our lives. At school, we use laptops and desktops for class work and websites to check our grades. Car manufacturers are trying to integrate software to enable wireless control over their cars with phones or tablets. Even fashion has begun to reflect the increasing popularity of technology. Big name tech moguls, such as Apple and Google, have come to a conclusion that the best way for a person to fully appreciate and utilize technology is if it is aesthetically pleasing. If the product looks good, customers are more likely to buy it and fawn over its beauty and style.

There are currently three versions of the Apple Watch: the Sport, the Watch and the Edition. The cheapest option at a still hefty price of $349, the Sport offers a white, plastic sport band and an aluminum case to hold the materials which  make the watch. It is the least appealing option of the three due to its lack of a premium look and feel.

The second and the most popular option is the Watch. At a standard price of $549, the Watch boasts a beautiful steel coat rivaled by no  other smartwatch, and, unlike the Sport edition, the Watch offers a person  the option to choose different types of wristbands.

With choices such as a strong leather bracelet, a steel link bracelet and a Milanese loop bracelet, bearing any of these bands will display one’s fashionable and premium taste.

The last version of the Apple Watch is the Edition. The Edition is the most expensive out of the three models of the Apple Watch, boasting a $10,000 to $12,000 price tag depending on the shade of gold and type of wristband one gets. The two shades of gold, rose and yellow, are both made of 18-Karat gold, and the leather buckles are made out of a durable fluoroelastomer material. Due to the Edition’s ludicrous price tag, those on a budget should opt for the cheaper version, but if you can afford it, it will show others that you have expensive taste.

All three of these watches are aesthetically pleasing and scream luxury; however, one buys an Apple Watch because it looks like an advanced piece of jewelry, and because one has the money to buy one. In short, people who buy Apple Watches are showing others that they are egotistical brats and are not afraid to spend lots of money on pretty little things.

Just as the iPhone 6 has the Apple Watch as its official smartwatch, the Moto X smartphone has the Moto 360 ($249.99) as its “official” smartwatch as well. The Moto 360 was introduced into the smartwatch industry with a design that was both new and old: a smartwatch with a circular watch face, a classic but modern design. From the first pocket watch to current modern watches, the circle has been the epitome of the shape of a watch face. Most smartwatch manufacturers have designed their smartwatches to take on a rigid, more rectangular design, resulting in a mundane looking product that leaves little room for a screen as a watch face.

The Moto 360 uses the functionality of its circular design to make the screen as large and accessible as it can be. Its minimalist design allows for better viewing angles, more screen for the user to work with and a user interface (UI) that should be easy for any consumer to get the hang of.

The Moto 360 also has a unique online service known as Moto Maker, in which customers are allowed to personalize their watch according to their preferences. Customers are able to change the color of the watch face, the default home watch face and the material and color of the wristband that goes along with it.

The watch face itself is made from a LED screen; however, the outline of the watch is made from stainless steel, with choices of a gold, silver and dark grey finishes. The wristbands of the Moto 360 vary from leather bands to steel bands, based on preferences and fashion taste. The only hindrance that some users may find in the 360 is an awkward looking black bar at the bottom of the watch face which makes the UI a bit awkward to use, as the 360 does not actually have a display that is entirely circular. Despite one trivial drawback, the Moto 360 is a fantastic looking smartwatch that uses its simplistic design and customizability to bring itself above other smartwatch competitors.

On Jan. 15, 2008, Steve Jobs announced what would be the thinnest notebook in the entire world: the Macbook Air. He saw the reduced width and the resulting lightness of a laptop as the “it” factor when it came to choosing a product. Critics praised the Macbook Air for its portability: the fact that it could hold such a powerful processor in such a thin frame, and the fact that the design was way ahead of other larger, more bulky laptops designs that existed at the time.

Flash forward to March 9, when Apple Chief Executive Officer Tim Cook announced the all new Macbook. As the thinnest and lightest laptop to date, the new Macbook’s largest point is a half inch tall, and the laptop weighs in at  two pounds, versus a 3-pound Macbook Air. Apple has ditched the cheap, glossy plastic look that the original Macbook had and replaced it with an all aluminum unibody to give it the premium feel that all current Apple products are made out of.

Just like the iPhone and iPad, consumers have a choice between space grey, silver and gold color options, allowing them to choose a laptop that dons a color of their taste. Apple has also revolutionized the way people can type on their laptops. The Macbook no longer uses the traditional mechanism that most laptops have for their keyboards — instead, Apple  replaced it with a sleeker looking keyboard with a “butterfly mechanism.”

Unlike the “traditional mechanism,” the “butterfly mechanism” has bigger keys and is slimmer than the average key button, allowing for faster typing with a flatter and more ergonomic design. The new Macbook as a whole is stylish and should be the model for other laptop manufacturers in terms of design. No other laptop is as thin, has such a pristine design or screams “sexy” as much as the new Macbook does.

The Bose Soundlink Bluetooth On-Ear headphones are one of the better wireless headphone options on the market. In general, the common stylistic problem with Bluetooth headphones is that they look too bulky because of the Bluetooth receiver that is embedded in the headphones. As a result, the headphone is both grisly and unpleasing to look at.

However, the Bose Soundlink headphones are an exception from this common issue. The receiver is seamlessly embedded inside one of the headphones, making it seem as if it isn’t a pair of wireless headphones at all. The pads on each ear cup are made of memory foam, a fabric which looks and feels like leather, almost giving the headphones a premium look and feel. Bose aimed for a pair of ear headphones that had a minimalistic look.

No glossy plastic used in Beats By Dre to make its headphones look “shiny” and “pretty,” no extra wires in order to “keep the bass controlled and leveled” and certainly no ear cups that are as big as your head (looking at you, Sennheiser).

Instead, Bose gave these headphones a fabric that has a premium yet unflashy look, eliminated wires so it did not look like some clunky pair of headphones from the 1900s and gave them a proper ear cup size that covers the ears and ONLY the ears (still looking at you, Sennheiser). Bose created the Bose SoundLink Bluetooth On-Ear headphones with a goal of creating minimalistic, compact headphones that not only look good, but also sound good.