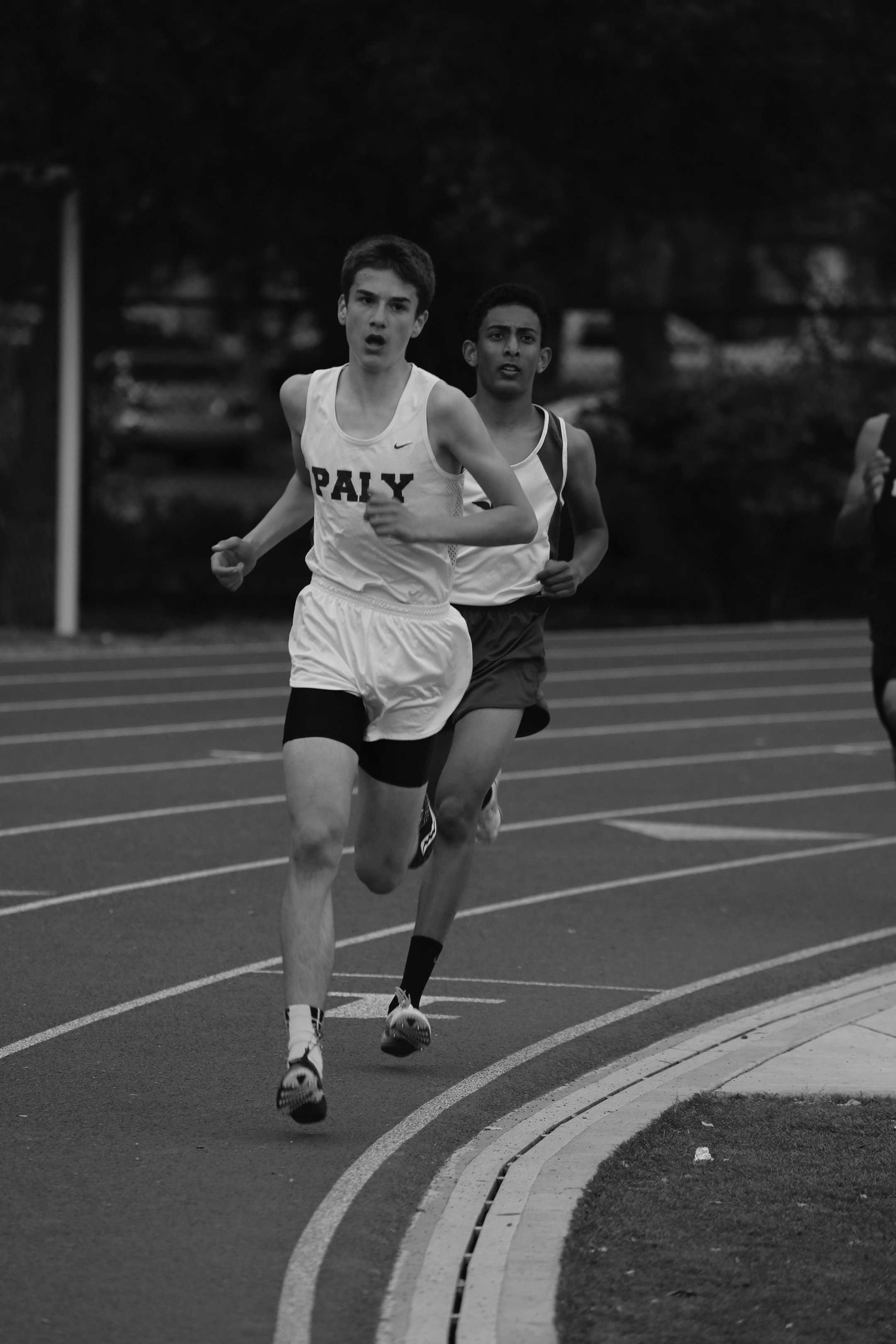 Junior Samuel Desre (front) and sophomore Naveen Pai (back) in the 3200-meter race.

Track and field looks to impress at CCS Finals

Ethan Teo
Sports
May 21, 2015
Juniors Eli Givens, Austin Cox, Dami Bolarinwa and sophomore Kent Slaney of Palo Alto High School’s track and field team took on the spotlight at the Santa Clara Valley Athletic League (SCVAL) Championships on May 15 in the boys’ 4×400 meter race, where they made an exhilarating comeback to end the relay in first place. The race contributed to Paly’s point total and allowed the boys to end in fourth place out of the 13 teams that attended the meet, while Paly’s girls finished in sixth place.

“I’m proud to be a part of such a cool and energetic squad, and hopefully we’ll be able to take this relay team to [the State Championships],” Cox said.

Unfortunately, Paly’s track and field team struggled to meet its high expectations at the DAL Finals on May 7. Paly’s junior varsity girls came in second behind Henry M. Gunn High School. Varsity boys placed third in the meet, while frosh/soph boys and varsity girls both came in fifth.

Regardless, there were still a number of standout performances by Paly individuals. Givens, who has been a consistent performer during his  entire season, came in first place for both the 100-meter dash and 200-meter dash.

Givens’ times this season have allowed him to secure the top seed in both the 100-meter dash and 200-meter dash in the Central Coast Section (CCS) Championships, which will be held on May 23 and May 29. Junior hurdler Catherine Yu will be the eighth seed at CCS in the girls’ 300 meter hurdles race. The boys’ 4×400 meter relay team made up of Givens, Cox, Bolarinwa and Slaney is seeded third.

Along with Givens, Yu, Cox, Bolarinwa and Slaney, seniors Anna Dukovic and Julia Asin, sophomores Titi Bolarinwa and Marion Sellier and freshman Adee Newman will represent Paly at the Championships.

“I’m trying to break my mile time of 4:20 and hopefully hit 4:18 to qualify for [the State Championship], and get top three in the finals,” Slaney said.