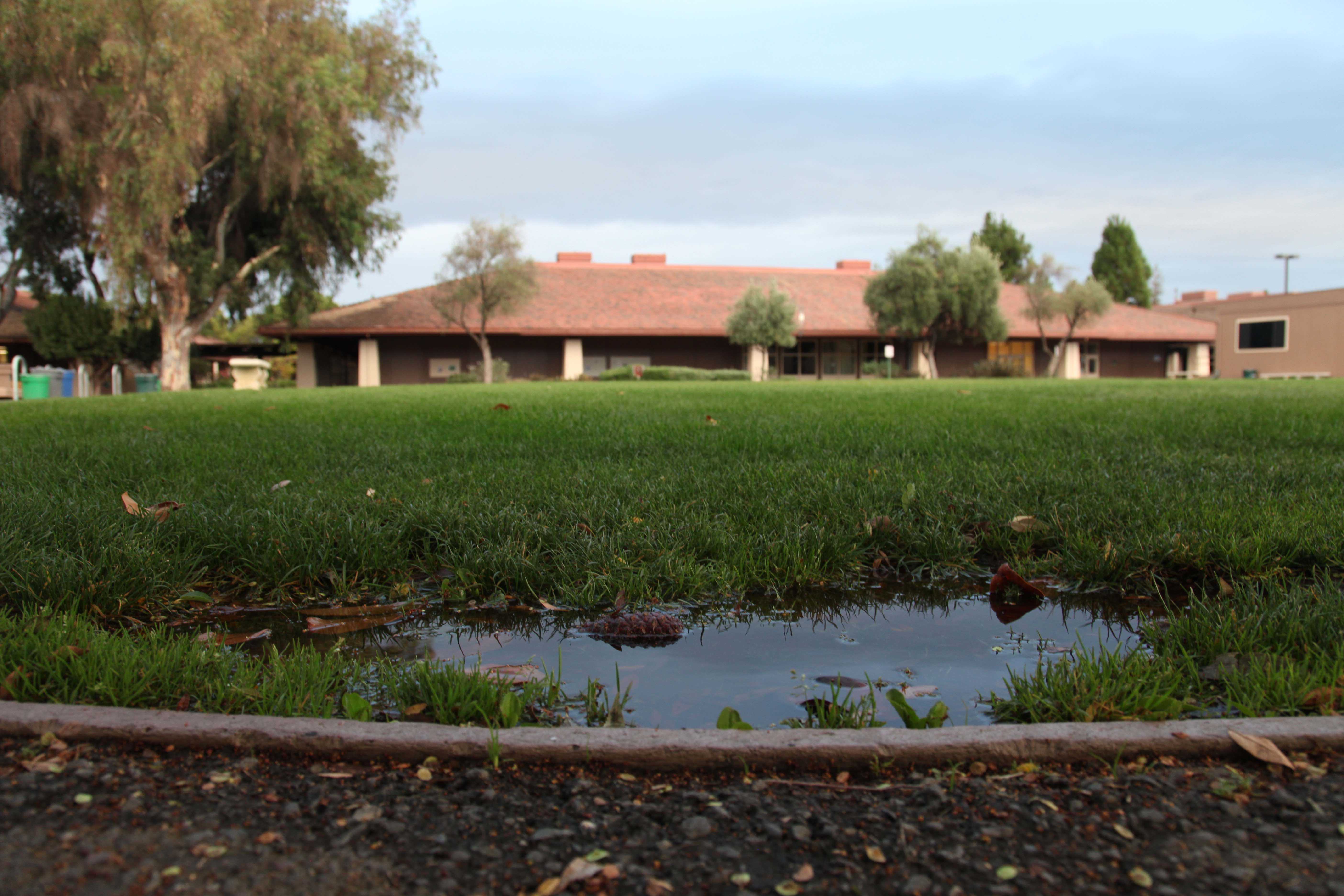 Paly should conserve water by practicing efficient watering techniques so that areas such as the quad are not excessively watered.

Paly needs to make a greater effort to conserve water

David Tayeri
Opinion
September 18, 2015
As California enters its fourth year of extreme drought and wildfires char over 270,000 acres of the state, it has become increasingly important for everyone to do their part to help conserve water. While the State legislature, Stanford University and even state prisons have made efforts to preserve California’s most valuable resource, Palo Alto High School has largely failed to contribute. Essentially, Paly needs to make more of an effort to conserve water.

As a state, California reduced water use by 31 percent in July. This massive saving of water has come at the cost of thousands of lawns, gardens and even public restrooms. Paly, on the other hand, appears to have sacrificed close to nothing in its attempts to help save water, and even more importantly, have done very little to promote awareness when it comes to conservation.

Paly spends an average of $14,700 on each student every year – $6,200 more than the California median. This extra funding is taken from the high property taxes in the neighborhoods surrounding the school. The money is spent on everything from laptop computers to  ambitious building projects. It follows that Paly should be able to expend some more resources to conserve water, considering how many untold thousands were spent to plaster the Media Arts Center with effectively useless flat-screen televisions.

Money becomes even less of an issue when one considers that many of the ways that Paly can try to preserve water, such as installing low-flow toilets, which are ultimately cost-efficient.  Low-flow toilets, which use less than one-third the water of a regular toilet, pay for themselves in less than a decade after installation. Low-flow toilets were recently implemented in Orange County’s largest correctional facility, as part of a broad effort to preserve water. Paly should try to be at least as progressive as prisons, at least when it comes to saving water.

Saving water at Paly does not necessarily have to entail extensive retrofitting of campus bathrooms either. It could be as simple as solving the quad’s irrigation problem.

If Paly can just correct some blatant water wasting errors, there may be no need for major changes to take place on campus. Why is it that a student walking across the quad at brunch may suddenly find themselves ankle deep in thick mud?

If the quad is truly being over watered, while so many other fields and lawns across our state go yellow, then Paly is committing a grievous sin. It is not necessary for the grass on the quad to be allowed to die, but as long as it is riddled with six-inch deep puddles, something must be done. Perhaps the ground needs to be levelled out in some place, or there is a leaky pipe in the irrigation system.

To be honest, Paly does not currently appear to be making a particularly strong effort to preserve water. The new theater and gym, two huge construction projects, are consuming thousands upon thousands of gallons of water.

This water is used for dust control, concrete, and drinking water and air conditioning for the workers. If only the water used for construction could be reduced by 5 or 10 percent, Paly could stand to save huge amounts of water. Although this may be somewhat outside of Paly’s influence, water can be saved at construction sites by using “grey water,” which is recycled water that contains no human waste.

There are less obvious ways for Paly to conserve water as well. For example, increasing the digitization of learning materials could save untold gallons of water. Just one sheet of copy paper can take over 13 ounces. of water to produce.

How many pieces of paper do you think each student at Paly uses every school year? If only a few extra lessons could be put online, Paly could prevent even more water from being wasted.

However, it is not only administration that is responsible for saving as much water as possible at Paly.  Any student can make an impact when it comes to reducing water waste.

Saving water can be as easy as bringing your own water bottle to school instead of buying a SmartWater at CVS pharmacy. It typically takes 1.39 liters of water to produce a one liter bottle of water. In addition, students can try to stop buying meat heavy lunches, and avoid driving when possible.

While few will say it out loud, many of those reading this article may be thinking: “Why should I care? Why should I change my lifestyle to accommodate the drought?”

Californians simply can not afford not to adapt. It is a matter of either saving enough water to hold out until the drought ends, or running out completely.

Paly will not become a water efficient school overnight. Drop by drop, gallon by gallon, this school can claw its way out of a perpetual state of water waste and emerge as a shining example of conservation and eco-friendliness.

Governor Jerry Brown has mandated the state to use 25 percent less water in the remainder of 2015. Paly ought to aim to not just meet this standard, but surpass it, a perfectly attainable goal.