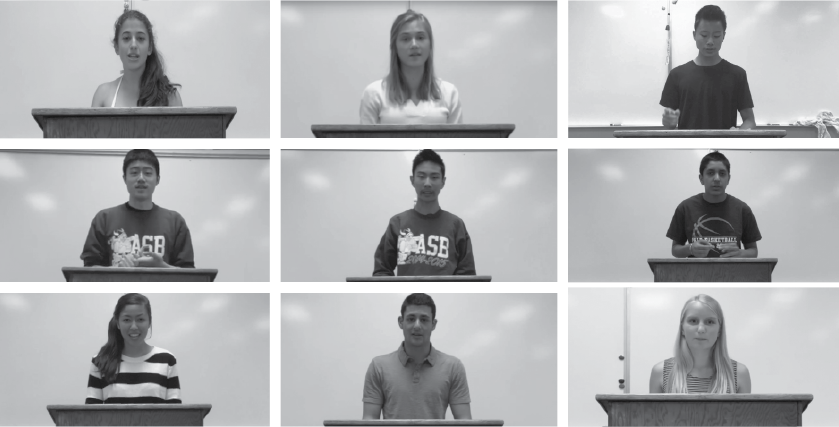 Live is better than online.

As of the 2013 school year, the approach Palo Alto High School’s Associated Student Body (ASB) has taken during elections is to upload candidates’ speeches onto YouTube. Before then, students, along with their respective classes, were required to listen to candidates as the prospective class officers delivered their speeches live in Paly’s Haymarket Theater. However, even with the limited space inside the theater and the major construction, there still remain some areas at Paly with enough space to host an entire class of students to watch live candidate speeches. Without this in-person experience, students will miss out on the opportunity to truly understand their class candidates.

This year, the freshman class broke the record for voting, and the winning candidate for presidency was Caroline Furrier. Furrier’s candidate speech on YouTube received 248 views. However, the Frosh Election poll counted 285 students who actually voted. This gap in the number of viewers and voters shows that students are making decisions without the necessary information to make informed choices. Even then, other  videos received up to 95 or less views, suggesting election success was reliant on candidate popularity.   Freshman Shannon Zhao, who also ran to be her class’s president, felt as though students were more likely to vote for the person they knew best, not the best candidate.

“I had just moved to Palo Alto last year,” Zhao said. “So being a new face while running for class president was especially challenging. I felt as though people were voting for the candidate they knew the most, and not actually for the best candidate, whoever it may be. Caroline and I shared some of the same friends and because she has been their friends for a longer period of time, I felt as if they were obligated to vote for her over me.”

With content solely online, students unfamiliar with the candidates can only rely only on one resource to connect with their possible future representatives. Thus, the majority of students are ultimately left to make impactful decisions without being well-informed. Processes of democratic decisionmaking only works when enough people participate to form an informed majority. In order to increase participation in all classes and to have students make well thought-out choices, ASB candidate speeches should have mandatory attendance. This way voters will make more informed decisions.

Junior class President Noa Ben-Efraim, who was the sophomore class president the year before, advocates for a well-informed student body.

“I think it’s beneficial for students who aren’t familiar with the candidates to experience their speeches either online or in person to make a more informed decision,” Ben-Efraim said. “With more publicity and teachers giving reminders about the elections, there will be a greater voter turnout.”

By restricting candidate speeches to be solely online, there is an expectation that students will seek the videos out on their own accord. This is problematic. Some students do not have computer access at home. In the Minority Achievement and Talent Development Advisory Committee’s 2015 report to the Palo Alto Unified School District (PAUSD) Board of Education, members claimed to be “surprised to hear from students about their lack of access to computers and printers at home.”

While this data is focused on minorities in PAUSD, there was no other data on students’ at-home access to computers found online, nor in the 2015 Western Association of Schools and Colleges’ Final Report on Paly.

Paly students, with a tendency to strive twoards high achievement, are often busy with activities such as schoolwork and extracurriculars. The natural inclination for a student would be to forget about the online candidate speech videos. Even if a student did remember, it would likely be a low priority among other more pressing tasks, namely extracurricular activities. Paly students are given the responsibility to learn about their potential representatives, but the convenience of online videos does not encourage them to participate. In fact, it takes away the incentive to participate.

Voting for an ideal representative is difficult if one cannot experience his or her character first-hand. While this may be more immediate and available, it hinders interpersonal connection.

A live speech creates an authentic atmosphere for both the candidate and the audience. Additionally, live speeches help eliminate students voting for the candidate they know best and not the best candidate. Though some may argue the simplicity of an online approach, face-to-face communication ensures that students are at least somewhat exposed to a candidate’s speech. The current online system creates a disconnect, which must be overcome to create a truly representative ASB.

“I think students should have to attend their grade’s candidate election speeches because this ensures that all the students would have seen and heard what their future class representatives have to offer and what they will fulfill during their term,” Zhao said.

The standard for having a voice in Paly’s electoral process is too low. It is too reliant on technology when older methods are more effective. At the very least, teachers should utilize the online system and show their students ASB candidate videos. This could easily be done during advisory periods or tutorial. The student body,, must be informed to make educated votes. Also, not only will cooperation increase, but the students’ best interests will be better represented.