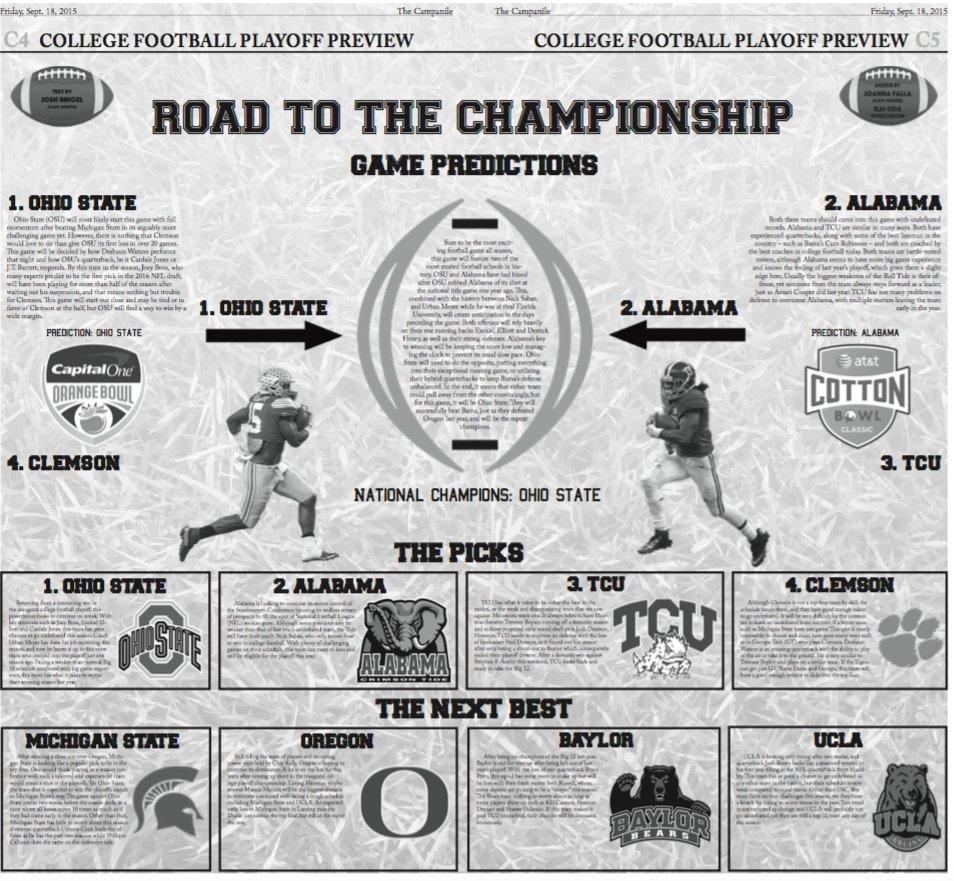 Road to the Championship

Game 1: Ohio State (OSU) will most likely start this game with full momentum after beating Michigan State in its arguably most challenging game yet. However, there is nothing that Clemson would love to do than give OSU its first loss in over 20 games. This game will be decided by how Deshaun Watson performs that night and how OSU’s quarterback, be it Cardale Jones or J.T. Barrett, responds. By this time in the season, Joey Bosa, who many experts predict to be the first pick in the 2016 NFL draft, will have been playing for more than half of the season after waiting out his suspension, and that means nothing but trouble for Clemson. This game will start out close and may be tied or in favor of Clemson at the half, but OSU will find a way to win by a wide margin.

Game 2: Both these teams should come into this game with undefeated records. Alabama and TCU are similar in many ways. Both have experienced quarterbacks, along with some of the best lineman in the country – such as Bama’s Cam Robinson – and both are coached by the best coaches in college football today. Both teams are battle-tested rosters, although Alabama seems to have more big game experience and knows the feeling of last year’s playoff, which gives them a slight edge here. Usually the biggest weakness of the Roll Tide is their offense, yet someone from the team always steps forward as a leader, just as Amari Cooper did last year. TCU has too many problems on defense to overcome Alabama, with multiple starters leaving the team early in the year.

Game 3: Sure to be the most exciting football game all season, this game will feature two of the most storied football schools in history. OSU and Alabama have bad blood after OSU robbed Alabama of its shot at the national title game one year ago. This, combined with the history between Nick Saban and Urban Meyer while he was at rival Florida Universtiy, will create anticipation in the days preceding the game. Both offenses will rely heavily on their star running backs Ezekiel Elliott and Derrick Henry, as well as their strong defenses. Alabama’s key to winning will be keeping the score low and managing the clock to prevent its usual slow pace. Ohio State will need to do the opposite, putting everything into their exceptional running game, or utilizing their hybrid quarterbacks to keep Bama’s defense unbalanced. In the end, it seems that either team could pull away from the other convincingly, but for this game, it will be Ohio State. They will successfully beat Bama, just as they defeated Oregon last year, and will be the repeat champions.

1. Ohio State: Returning from a convincing win in the inaugural college football playoff, this powerhouse looks to continue its streak. With key returners such as Joey Bosa, Ezekiel Elliott and Cardale Jones, this team has great chances to go undefeated this season. Coach Urban Meyer has done his job recruiting this season, and now he leaves it up to this same team who creeped into the playoff just one season ago. Facing a weaker-than-normal Big 10 schedule combined with big game experience, this team has what it takes to repeat their amazing season last year.

2. Alabama: Alabama is looking to continue its recent control of the Southeastern Conference by using its endless stream of prospects to fill the spot of National Football League (NFL) rookies gone. Although some positions may be weaker than that of last year’s undefeated team, the Tide still have their coach Nick Saban, who only knows how to win in college football. With plenty of challenging games on their schedule, this team has room to lose and still be eligible for the playoff this year.

3. TCU: TCU has what it takes to be either the best in the nation, or the weak and disappointing team that we saw against Minnesota week one. It always helps to have Heisman favorite Trevone Boykin coming off a fantastic season and to have projected early round draft pick Josh Doctson. However, TCU needs to improve on defense with the loss of linebacker Paul Dawson, as it found out last season after only losing a shoot-out to Baylor which consequently ended their playoff dreams. After a fantastic win against Stephen F. Austin this weekend, TCU looks back and ready to take the Big 12.

4. Clemson: Although Clemson is not a top four team by skill, the schedule favors them, and they have good enough talent to go undefeated. It will be very difficult for the committee to leave an undefeated team out even if a better team such as Michigan State loses one game. This spot is nearly impossible to choose and could have gone many ways such as to Georgia Tech (GT) who plays Clemson. Deshaun Watson is an amazing quarterback with the ability to play in the air or take it to the ground. He is very similar to Trevone Boykin and plays on a similar team. If the Tigers can get past GT, Notre Dame and Georgia, this team will have a good enough resume to slide into the top four.

Michigan: After winning a close one over Oregon, Michigan State is looking like a popular pick to be in the top four. One would think playing in a weaker conference with such a talented and experienced team would mean a shot at the playoffs. Yet Ohio State, the team that is expected to win the playoffs, stands in Michigan State’s way. The game against Ohio State comes two weeks before the season ends, in a time where all losses mean 10 times as much as if they had come early in the season. Other than that, Michigan State has little to worry about this season if veteran quarterback Connor Cook leads the offense as he has the past two seasons while Shilique Calhoun does the same on the defensive side.

Oregon: Still riding the wave of players and recruiting power once held by Chip Kelly, Oregon is hoping to continue its dominance. A lot is on the line for this team after coming up short in the inaugural college playoff championship. Losing Heisman trophy winner Marcus Mariota will be the biggest obstacle to overcome combined with facing a tough schedule including Michigan State and UCLA. An expected early loss to Michigan State in Lansing puts the Ducks just outside the top four, but still at the top of the rest.

Baylor: After being co-champions of the Big 12 last year, Baylor is out for revenge after being left out of last year’s playoff. With the loss of star quarterback Bryce Petty, this squad has some room to make up but will be fine with their fresh starter Seth Russell, whom some experts are picking to be a “sleeper” this season. The Bears have nothing to worry about as long as some players show up such as KD Cannon, Spencer Drango and Shawn Oakman. If this team makes it past TCU unscathed, their chances will be increased immensely.

UCLA: UCLA is looking very strong after two weeks, and quarterback Josh Rosen looks like a seasoned veteran in his first year filling in for NFL quarterback Brett Hundley. This team has as good a chance to go undefeated as any other team in the nation, but their schedule is very weak compared to equal teams. Other than USC, this team faces no true challenges this season, yet they have a knack for losing to worse teams in the past. This trend is not expected to change and UCLA will probably not go undefeated, yet they are still a top 10 team any day of the season.