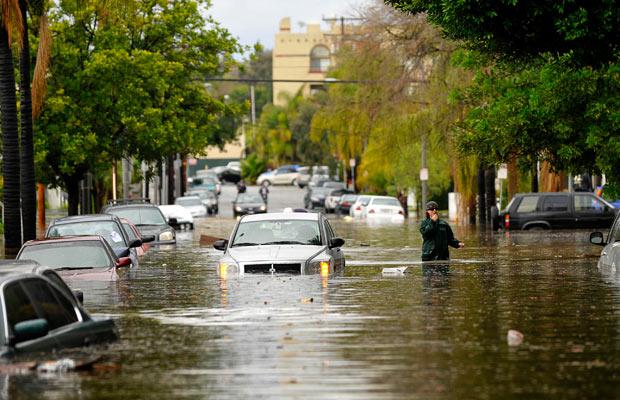 The National Weather Service predicted a 95 percent chance of an El Niño storm to occur throughout December 2015 to March 2016 across the United States. Meteorologists are speculating this 2015 El Niño to surpass the 1998 storm in rainfall, with the temperatures in the Pacific Ocean continuing to grow. Many California residents are feeling hopeful after hearing the news that this winter’s El Niño storms could bring significant relief to the state’s current drought. However, there is also concern about the damage this potential record breaking storm may bring. El Niño storms stem from increased surface temperature in the Pacific Ocean, which increases rainfall.

“This definitely has the potential of being the Godzilla El Niño,” NASA climatologist Bill Pazert said in an interview with the LA Times.

The last massive El Niño storm in Palo Alto struck in 1998 and resulted in an estimated $28 million in flood damages in Palo Alto and neighboring areas surrounding San Francisquito Creek. Since the destruction that came with the storms of 1998, many city council members have been tracking some of the problems that caused the flooding in Palo Alto in order to be better prepared when they come. With the threat of a larger storm striking next winter, the city council has proceeded to analyze any potential flood hazards.

“Our first priority remains the safety of our communities and the protection of homes, and we are working to ensure that our efforts focus on both,” James Keene, the Palo Alto City Manager said in an email to a resident on the CPNA Board.

The San Francisquito Creek Joint Powers Authority (SFCJPA) have identified five main bridge replacement projects necessary to prevent further flooding during major storms. One of these five is the Pope/Chaucer Street Bridge, located on the border of Palo Alto and Menlo Park. The bridge currently obstructs water passage through the creek, causing the water level to overflow out of the boundaries during storms.

This area was the source of the most significant flooding for nearby residents in Palo Alto during the past El Niño flood. During the 1998 storm, fast-moving runoff became blocked by the low opening of the bridge and gathering debris which caused the water to jump the banks and flow into surrounding neighborhoods. This poses a great threat to the nearby residents due to potential property damages. Because only minor improvements have been implemented since then, residents are concerned about recurring problems and have pushed for more regulations.

The Santa Clara Water District has been working closely with SFCJPA and has come to three solutions: raise the bridge, remove the bridge completely or reconstruct the platforms to allow more water to flow through. Unfortunately, none of these projects will be completed in time for the storm, most set to be completed in the following years. Nonetheless, the city has recommended self-preparation methods and temporary solutions.

A new concept presented includes temporarily placing sandbags on top of a berm lining the creek strengthen the walls to slightly increase the capacity of the creek. The city is also offering sandbags to all residents for free at the Palo Alto Airport, Mitchell Park, Rinconada Park and on Chaucer Street as well as Palo Alto Avenue. Beyond that, it is highly recommended that residents identify if their home is in a flood zone and discuss emergency plans with their families.

Residents can find more information on the City of Palo Alto website under Public Safety. Officials recommend replacing batteries in flashlights and portable radios and picking up plastic sheeting, plywood and other materials necessary for waterproofing doors. Being prepared with the correct materials and procedures for a storm will help all residents stay safe this winter as the area prepares for the heavy rainfall and flooding that will accompany El Niño.