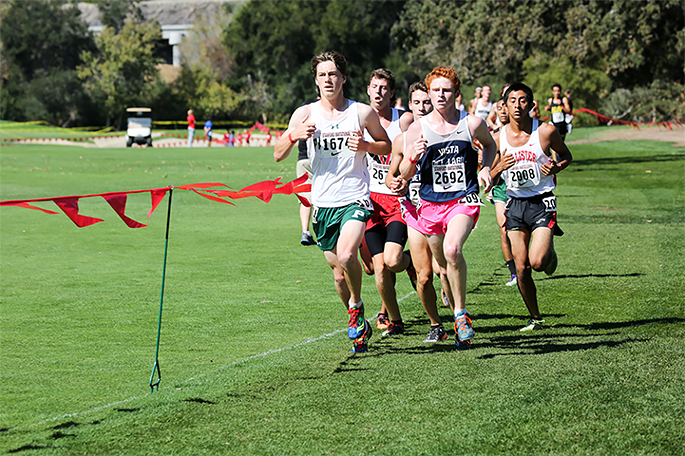 Avi Tachna-Fram
Sports
October 12, 2015
Palo Alto High School’s cross-country team is in the middle of their season with the boys winning the Crystal Springs meet on Oct. 6 and girls placing third.

“[The boys] got second at the Stanford Invitational in the Division 1 race,” boys senior captain Samuel Desré said. “Everyone on the team got personal records and Kent Slaney won the race.”

Certain individual runners such as juniors Kent Slaney and Naveen Pai have done exceptionally well throughout this year. However, the team has yet to come together and execute as a whole.

“We can’t really run as a pack because we’re more spread out,” Desré said. “Kent is [usually] 30 seconds ahead of all of us, so we really have a larger spread of our times — more than a minute.”

On the other hand, the girls team performed at a mediocre level at Stanford, placing 18th out of 33 teams.

“There is definitely room for improvement, but I do not think there was anything that went completely wrong,” girls senior captain Portia Barrientos said. “We need to discuss race tactics, because I know that there are a lot of conflicting tactics about how you should run a race and how a team should race together.”

According to Desré, if Paly wants to beat Bellarmine and fulfill their goal of winning the state championship, the team will have to work hard on closing the time range of their performances.

“[Bellarmine] has a spread that is less than 30 seconds, which is a sign that they are a very strong team, and that we need to be closer [to each other] and faster if we’re going to beat them,” Desré said.

At the Lynbrook High School meet, the boys team dominated, as four of the top six runners were from Paly, but the meet was not very challenging.

“I think that we were strong enough mentally,” Desré said. “But for an easy meet with no real pressure and only two miles, it’s hard to be weak mentally.”

The girls team also had a subpar performance at Lynbrook High School, placing 10th out of 14 teams.

“Our varsity [team] ran the race as a workout because we had just run the Stanford Invitational,” Barrientos said. “It was more constructive to get a workout in and reduce the chances of injuries worsening.”