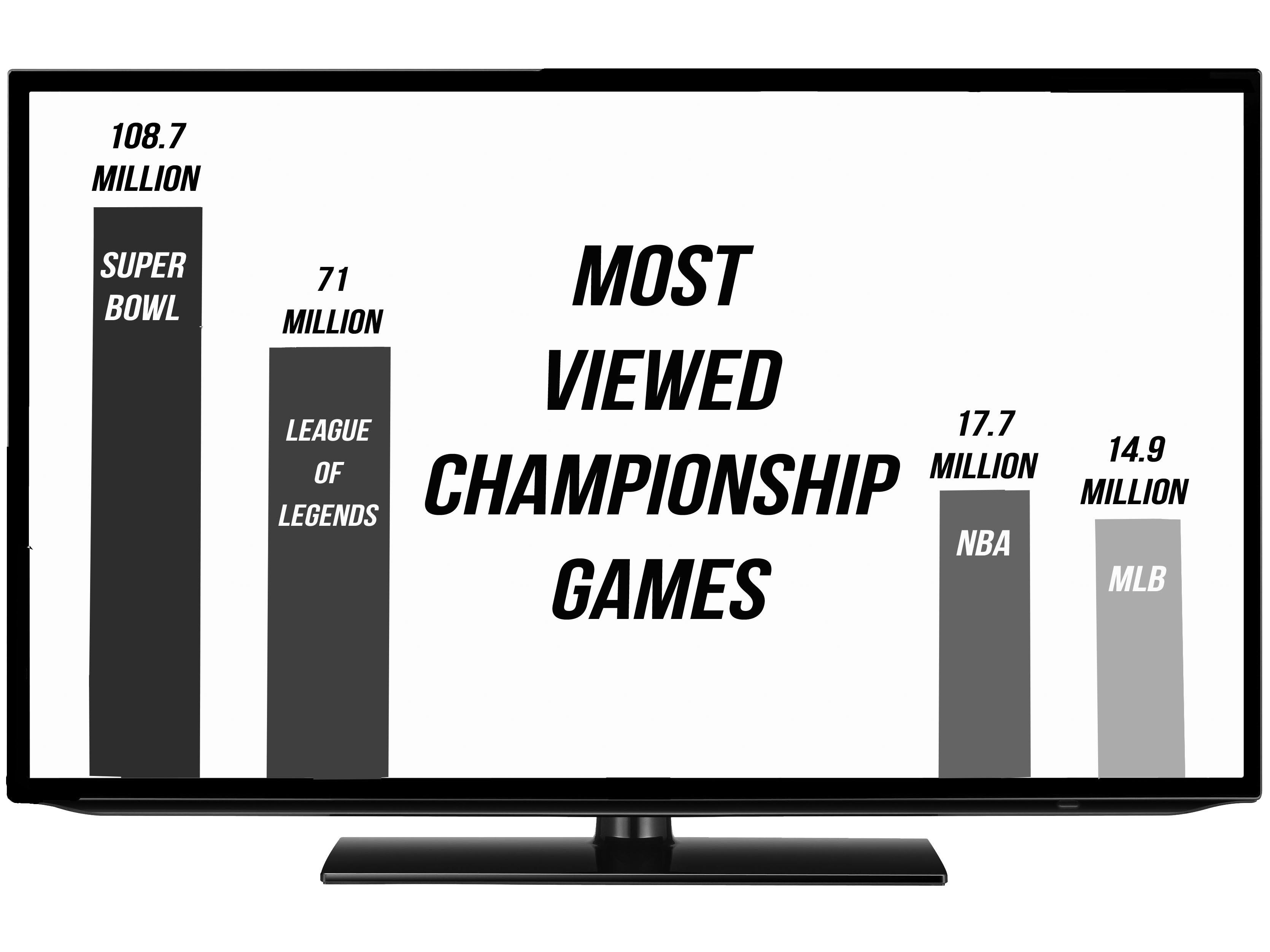 In 2013, the LoL World Championships saw more viewership than the NBA and MLB Finals.

In 2013, the League of Legends (LoL) World Championships held in the Staples Center in Los Angeles drew about 32 million viewers in the United States, with 71 million viewers globally, according to Riot Games. Currently, this is the most popular video game in the world, with over 27 million people playing daily. The sheer amount of viewers is almost the same as the number of viewers in 2013 for the National Basketball Association (NBA) Finals (17.7 million) and the World Series for Major League Baseball (14.9 million) combined.

Ultimately, the popularity of LoL represents the trend of a growing industry: e-sports.

Contrary to popular belief, the e-sports industry has been around for a while. It can be traced back to 1998, when Blizzard Entertainment released Starcraft, a real-time strategy  game in which two players try to destroy each other’s buildings and base. Starcraft became popular in South Korea in the 2000s, when many preferred PC games over home gaming consoles.

A few years later, a new type of game was created that really made e-sports take off worldwide, the multiplayer online battle arena (MOBA) game. Two of the most popular games in the world are MOBA games – Defense of the Ages 2 (DOTA 2) and the aforementioned LoL. Both games, along with the shooter game Counter Strike: Global Offensive (CS:GO) and the online card game Hearthstone, have made e-sports a worldwide phenomenon.

Palo Alto High School senior Roy Zawadzki, a member of the CS:GO club, attributes the rise of e-sports to the popularity of watching professionals play in various leagues.

“E-sports is popular because people who play video games like to see people playing it at the highest level,” Zawadzki said. “Either so they can learn and eventually build up to that level, or just for enjoyment.”

Although e-sports is just taking off in the United States, it has become a part of mainstream culture in some countries, especially those in Asia. For example, in Korea, gaming has become a way of life.

[pullquote speaker=”” photo=”” align=”right” background=”on” border=”all” shadow=”on”]Instead of arguing over a game’s classification as a sport, people should appreciate the growing e-sports industry.[/pullquote]

However, in these regions, e-sports can be a double-edged sword. Korean teenagers play games at game clubs to relax and relieve stress from their notoriously rigorous workload.

Playing video games can also have negative effects, such as causing gaming addiction, which prevents students from sleeping and causes them to play games until school starts the next morning. Many teenagers have fallen ill due to dehydration and some have even passed away. There have also been cases of parents who leave their infant at home to play games and come home later to find their child dead.

In order to curb this addiction, the Korean government has imposed a gaming curfew for teenagers under the age of 16 from midnight to 6 a.m., and has spread awareness of gaming addiction.

“In school, kids are taught not only to be wary of drug and alcohol addiction, but digital addiction as well,” CNN writer John Sutter said in an article.

E-sports is a rapidly growing international industry with an interesting history and culture surrounding its development. One discussion revolving around e-sports has been its qualifications as a legitimate sport, such as basketball or soccer. There are good points for both sides, but many e-sports, like soccer or basketball, have teams, are competitive and require practice. However, instead of arguing over a game’s classification as a sport, people should appreciate the growing e-sports industry.

As the LoL Season 5 World Championships are underway in Paris, London and Brussels, one can have the chance to witness the magnitude of a rising, international phenomenon.