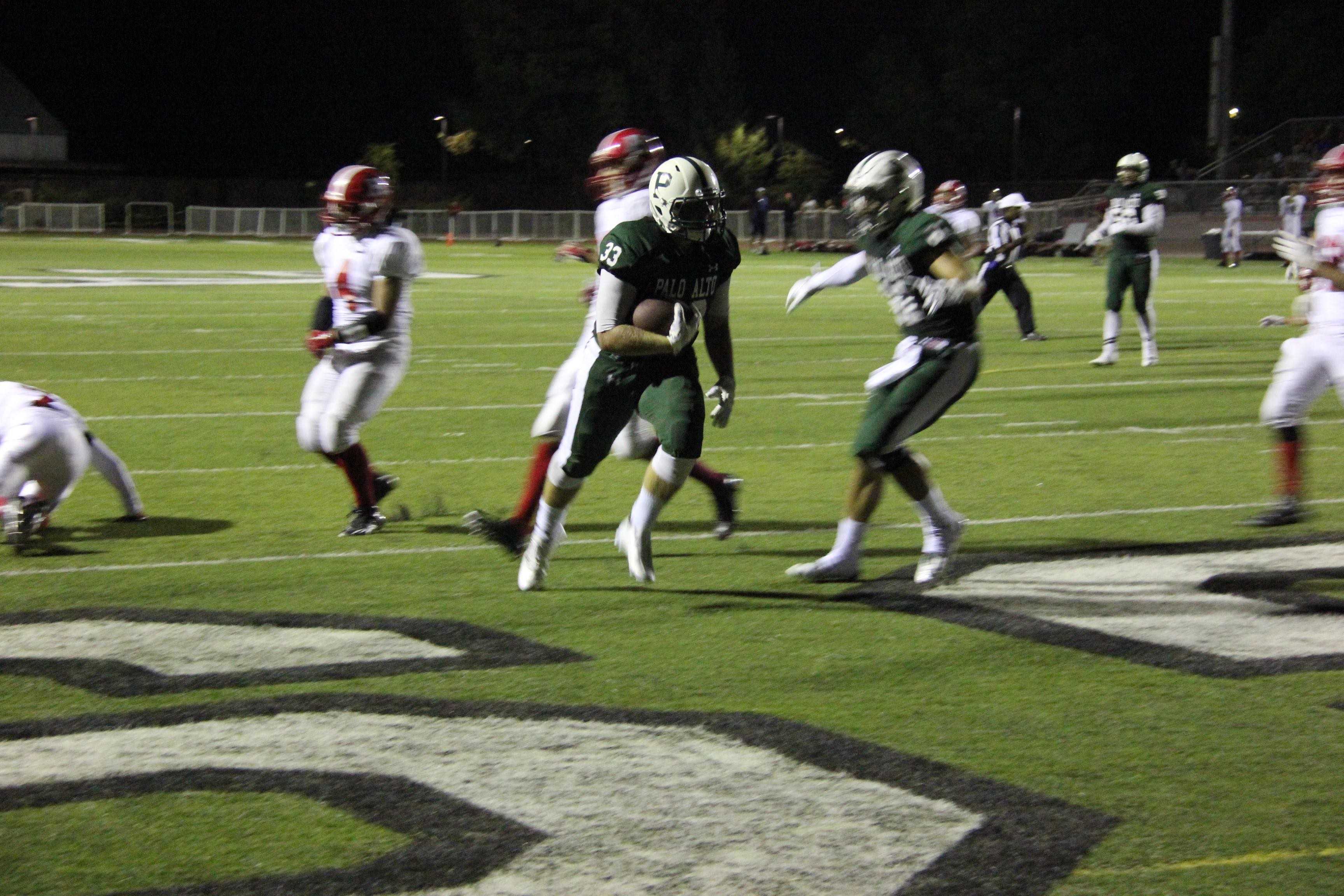 Senior fullback Shaun Pike rushes past defenders for a touchdown against Sequoia.

On Sept. 18, Palo Alto High School played their first away game against Archbishop Mitty High School, where they fell to the Monarchs with a final score of 52-28. The Vikings were able to keep the score tied at 28-28 until the end of the third quarter, with highlights like senior wide receiver Riley Schoeben’s touchdown from senior quarterback Justin Hull. However, the Monarchs managed to pull ahead in the fourth quarter, scoring 24 more points late in the game.

Paly returned to Viking Stadium the following week to face Oak Grove High School, a team with two losses and one win. Paly entered into the game confident, but the Vikings ultimately fell to the Eagles with a disappointing score of 46-7. The Eagles’ defense stood strong the entire night, restraining Paly’s offense and only allowing them to score one touchdown.

On Oct. 2, Paly played the team that eliminated them from the Central Coast Section playoffs last year: Saratoga High School. In 2014, the Falcons won by a score of 41-33. But this year the Vikings managed to put up a fight and win, 42-35, in double overtime. In the third quarter, sophomore Paul Jackson III scored on a 20 yard run to tie the game at 21. Eli Givens made three catches for 111 yards, including a 67 yard reception for a touchdown right before half time. Hull threw an impressive 208 yards and four touchdown passes.

“It was a well deserved win for us because we’ve been hustling the entire season and to finally get a win that really means something, that’s great for us … and it’s also a good way to start off the league,” senior Chuck Stephenson said.

Paly football team’s high hopes at the beginning of the season have yielded mixed results.

“There were a lot of emotions going through that game,” junior Sean Romeo said. “There were frustrations with mental mistakes we were making and a lot of us were getting worked up by calls by the officials that we didn’t like, but in the end we were able to power through all that. Peter [Snodgrass] was cramping up and had to be carried off twice but he was still fighting till the end. I really think we were able to show the home crowd that we had the most heart that night.”