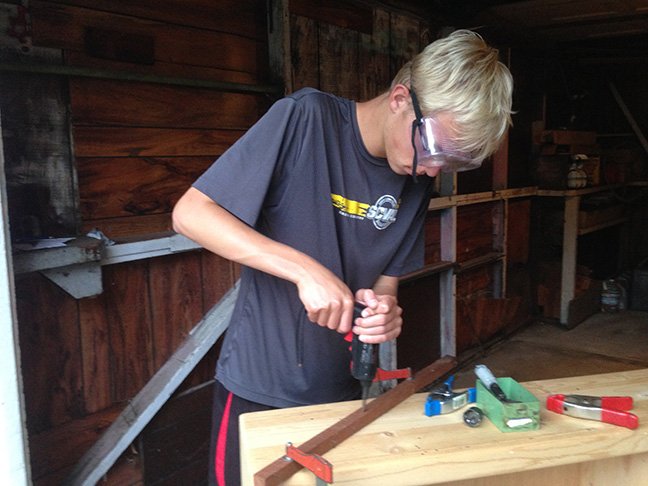 Junior Spencer Morgenfeld starts to build a robot for his alternative Robotics team.

Avi Tachna-Fram
News
October 30, 2015
Due to overcrowding in the Palo Alto High School club robotics team, junior Spencer Morgenfeld decided to create a new team for those who wanted to participate in robotics, but were cut from the current team.

“Team 8 [the Paly Robotics team] didn’t have enough room for everyone who was interested,” Morgenfeld said. “They had 100 people sign up to join and they had 90 people consistently showing up in the lab, and they only had room for 70 or so people.”

One of the reasons that Morgenfeld created the new team was to allow students who were cut from Paly Robotics, but still wanted to participate in a robotics program to be part of a team.

“I just want to make the robotics experience accessible to everyone who’s interested,” Morgenfeld said. “I’ve had a great two years of robotics and I’ve had a lot of fun, and knowing that a lot of the kids who were cut were freshman, I know that without this new team they probably wouldn’t be able to participate and have as much fun as I did.”

[pullquote speaker=”Spencer Morgenfeld” photo=”” align=”left” background=”on” border=”all” shadow=”on”]Since [Paly Robotics] was so large, a lot of the work that went into it was just maintaining what was going on. With a smaller team I feel like it’s going to be a lot easier to manage everything.[/pullquote]

Many students who have been cut from Paly Robotics still want to participate in robotics; the team Morgenfeld created gives them the option to participate.

“There’s lots and lots of things that come into consideration,” Kuszmaul said. “But ultimately it’s my decision and I make an arbitrary decision at some level.”

The new team will face many challenges as they attempt to establish a competitive alternative to Paly Robotics, including a lack of membership. Only seven students have committed so far, but Morgenfeld believes that the small size of the team will increase its efficiency, making up for having fewer people.

“Since [Paly Robotics] was so large, a lot of the work that went into it was just maintaining what was going on,” Morgenfeld said. “With a smaller team I feel like it’s going to be a lot easier to manage everything,” Morgenfeld said.

The new team also faces the challenge of dealing with the sheer amount of time that it takes to build a robot. They solved this problem by working 15 hours a week during build season.

“The lab hours are so high because that’s what we feel is necessary for us to build a competitive robot,” Build Captain of Paly Robotics Kenneth Cheung said.

The new team does not plan to have any time requirement for their participants. In addition, the new team will have to find its own source of resources as they cannot be affiliated with the school. Due to this regulation they will be operating out of Morgenfeld’s garage for the time being. The new team will be part of a group of teams in the Palo Alto area which includes, the Paly Robotics team, that shares resources.

“Sometimes you can’t [share resources] because you don’t have the resource or the time,” Kuszmaul said, “It’s not a promise that you can have anything you want, but I would view that team as a special member of a family of teams that were in.”

The new team also claims that it will not poach recruits from the Paly team.

The new team plans to be funded mostly through grants and corporate sponsorships.

“There’s a grant from the organization that runs the robotics competitions that we’re going to apply for,” Morgenfeld said. “We’ve already applied for a NASA grant and we also are going to attempt to get corporate sponsors as well.”