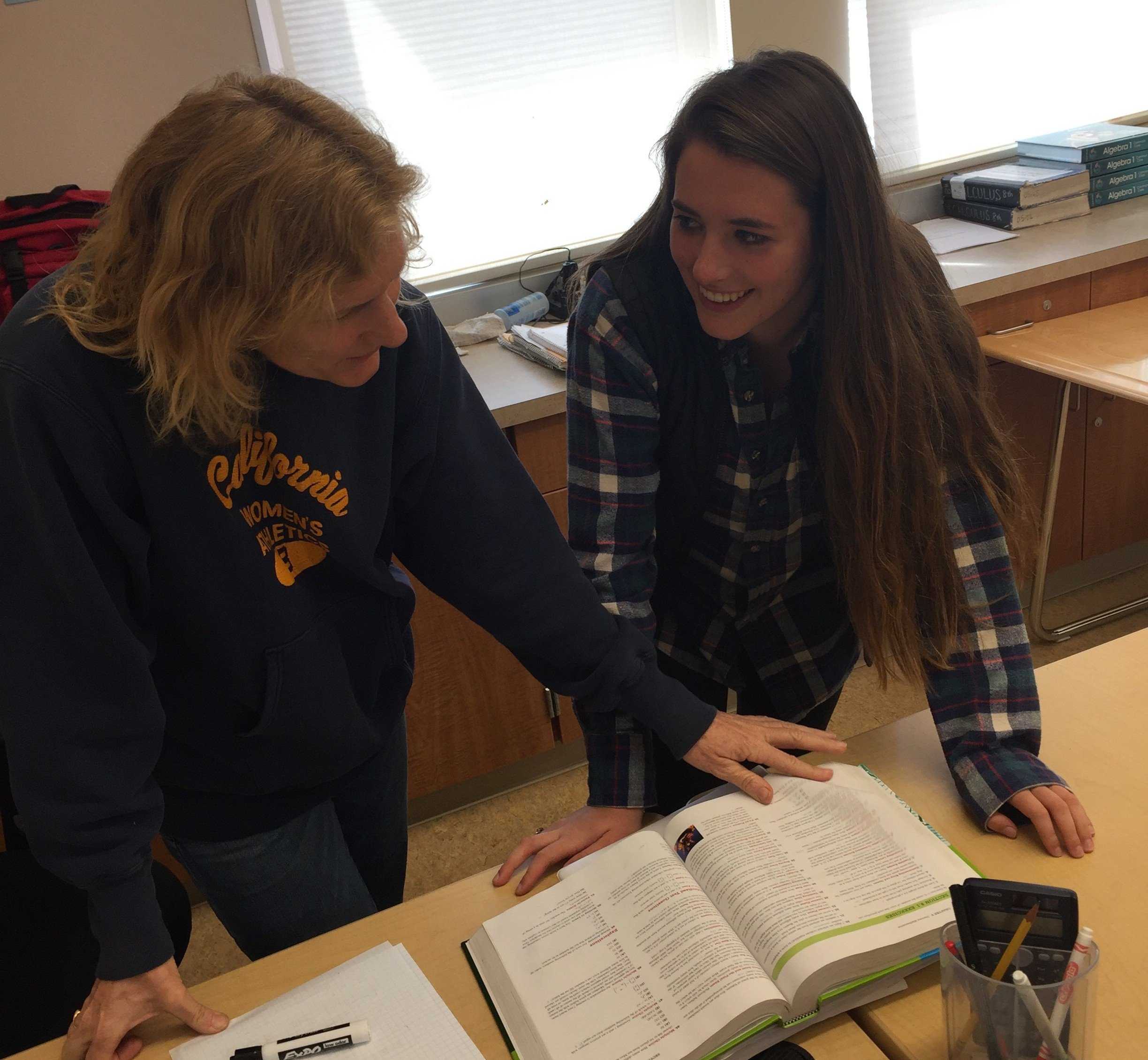 Benefits of having a parent as a teacher

Students’ and parents’ lives are generally fairly separate. Most parents of Palo Alto High School students might drop their children off at school, then go to work and the two will reconvene sometime later that day. But for students, between the six hours that a student is at school, parents are often out of sight and out of mind.

However, for many students whose parents also serve as teachers or staff on campus, the Paly campus fosters a completely different experience, providing a unique blend of both parent and teacher roles.

Senior Kevin Bowers is one of the many students who has experienced this phenomenon. His mother, Kathi Bowers, was a Paly mathematics teacher and has become Paly’s athletic director this school year.

Due to his mother’s presence on campus, Kevin Bowers sees his life at home merging with school life, as many classmates befriend his mother.

“My mother is brought up in almost every other conversation,” Kevin Bowers said. “It’s not the best thing having your mother be best friends with your friends, but it’s okay. ‘Hey, I’m coming over to see your mom’ is a text I receive quite often.”

Bowers finds that a benefit to having his mother on campus is her awareness of school activities.

“The biggest thing about having my mom around would definitely be the fact that she’s often more knowledgeable about on-campus events than I am,” Kevin Bowers said. “She’ll talk to me at home and ask, ‘Oh, did you hear about what so and so did?’ and it’ll be something I had no clue about. She talks to all kinds of students, and because of that, knows a lot about us.”

Nonetheless, Bowers can not imagine being in his mother’s class, due to the awkward balance between mother and teacher.

“Love my mom, but there’s something strange about going between ‘pass me the salt’ and ‘pass me my test back,’” Kevin Bowers said.

Economics teacher Debbie Whitson has two daughters, both of which attended Paly while she was teaching. According to Whitson, the initial transition of combining her professional and personal lives was awkward, but ultimately provided a new and enlightening perspective into the lives of both her daughters and high school students in general.

“I had been here a while before my [first] daughter was here, so it was actually a little bit weird,” Whitson said. “It does catch you by surprise a little bit and it’s an unusual peek into their lives because we [teachers] know what is going on with high school kids at school, while most parents have no idea. It’s nice — you know what they’re up to, you know what their possibilities are and what they’re doing and what they need to do.”

[pullquote speaker=”Debbie Whitson” photo=”” align=”left” background=”on” border=”all” shadow=”on”]I felt like I learned how the school worked better through the eyes of the student and what’s being asked of them.[/pullquote]

Besides offering insight into the lives of high school students, teaching her daughter’s peers has allowed Whitson to better understand her students.

“As a teacher, it’s fun just because you know all [of your child’s] friends,” Whitson said. “The better you know your students, it makes your job more fun, for me anyway. You see some kids who you’d helped in kindergarten class at Walter Hays and all of a sudden ‘Frank,’ who you hadn’t seen in eight years is sitting in your class, so that part was fun — keeping up with the kids.”

When her younger daughter attended Paly, Whitson had the unique experience of teaching her. According to Whitson, finding the appropriate manner to treat a child as a student is difficult, especially with the innate personal bond between the two family members.

“You either are too nice to them or too mean to them, so you try to be kind of neutral and not call on them too much or not ignore them too much,” Whitson said. “It’s like you know that one kid so well and it’s a little awkward.”

Ultimately, however, teaching in the same place as her children allowed for Whitson to better understand both the student and teacher perspectives.

“I feel like I knew my kids really well through high school,” Whitson said. “I felt like I learned how the school worked better through the eyes of the student and what’s being asked of them. I saw that part of it and how tough and demanding school is. It was [also] nice to get other feedback from teachers who I know professionally and to hear what comments they had [about my children] from other adults that I knew and respected professionally.”

[pullquote speaker=”Kevin Bowers” photo=”” align=”left” background=”on” border=”all” shadow=”on”]Love my mom, but there’s something strange about going between ‘pass me the salt’ and ‘pass me my test back.’[/pullquote]

Senior Mikaela Simison, whose mother is math teacher Natalie Docktor, has expressed similar sentiments to Whitson and has found having her mom at school to be a unique but enjoyable experience.

“A lot of kids ask me where my mom might be or what’s she doing and when her preps are and I’m more than happy to help them out,” Simison said. “In my sophomore year a bunch of my best friends had her as a teacher and that was fun. They just came over and made sure to have their math homework done.  I think it’s cool that people know my mom.”

Docktor, who has another child at Paly, junior Jack Simison, commonly finds herself switching between teacher roles and parent roles.

Overall, Docktor sees many benefits to having her children on campus.

“It is good to have other adults on campus that can say positive things and [say] ‘Yes, [your child is] doing well,’” Docktor said. “I have a very loving relationship with my kids and I do love having them on campus.”