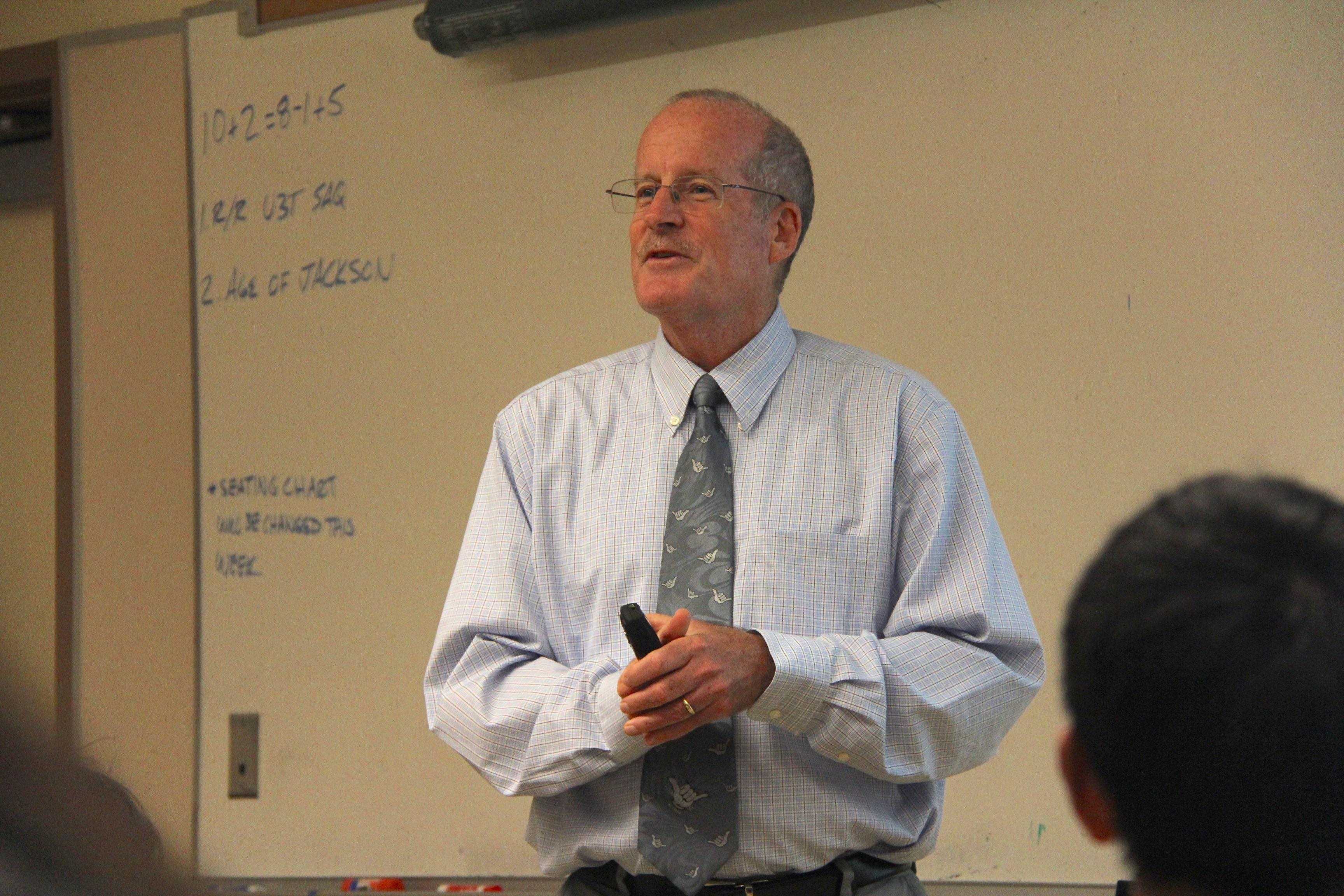 AP U.S. History teacher Jack Bungarden wears one of his many fashionable ties from his diverse collection while teaching a class.

All Paly teachers offer students opportunities to learn, though some of them also offer quirky, fun moments during class. These routines can increase student participation, relieve stress and are also quite amusing for most. There are three Paly teachers in particular who carry out interesting daily or weekly traditions.

Eric Bloom, a well-known history teacher in the Social Justice Pathway has a very distinctive custom many students may already recognize — Bloom wears a pair of Converse and a unique belt buckle every Friday. This habit originates from the idea that in Silicon Valley, attire worn on Friday is more casual.

Bloom’s trend started over 10 years ago and was not intended to become the weekly trend that it has become.

Bloom’s closet has grown to eight pairs of Converse and roughly 10 belt buckles, but he constantly has his eye out for new additions to his collection. Although he had no other intentions other than to be casual and fashionable, he says the Friday routine has had effects on the class and his students.

“Kids don’t notice it right away, but once they do, I have kids that show me their belt buckles and converse,” Bloom said. “I think it shows me as a little bit less uptight than I might be perceived otherwise.”

Bloom plans on continuing this unique tradition for a long time unless dressing casually becomes prohibited. Be sure to look out for the man with the fresh pair of sneakers and a stylish belt buckle every week on Friday.

If you have taken AP Environmental Science, you know about Kenyon Scott’s morning clap routine. Even if you have not, you may have heard about “The Clap.” During the beginning of each class, either Scott or a selected student delivers a series of claps, containing different rhythms and pitches. The clapping usually lasts for about a minute and is typically a complete freestyle.

Scott believes that his clapping routine is very effective for starting class.

“Different rhythms help to focus the mind and get the blood going,” Scott said.

The long-term science teacher spontaneously began “The Clap” during his fifth period class in 2009 and it was an instant hit. From that time on, when they did not perform “The Clap,” students would start to complain. Scott uses “The Clap” to begin each class and grab his students’ attention. However, Scott will often ask for students to come lead the exercise.

“When we find students who step up to lead it as well, it helps unify everyone,” Scott said. “It’s an effective way to get the class going and helps me manage the classroom.”

Scott has noticed that “The Clap” can also be relaxing and lighten the mood of before a test or quiz. Scott’s’ legendary clap has been perceived positively among students for many years and surely will be in the years to follow.

The impressive tie collection of the renowned AP U.S. History teacher Jack Bungarden is nothing new for many. Dating back to the beginning of his teaching career, Bungarden began to collect ties. These ties, however, are unique and unlike the conventional business attire.

“They range from historical to sometimes goofy,” Bungarden said.

Bungarden explained that he bought the first ties of his collection once he started teaching. He found $5 ties from T.J. Maxx and from there, it is history. Some examples of eccentric ties from Bungarden’s collection include  Dr. Seuss ties, a tie with Abraham Lincoln’s face on it, a tie with the text from the Emancipation Proclamation, a large collection of psychedelic Jerry Garcia ties and many, many more.

However, Bungarden was quick to credit his students’ role in the stockpile.

“My best ties have been gifts from students,” Bungarden said.

Throughout his years as a teacher, Bungarden says his tie collection has grown to well over 100 different ties. He’s even had a student count all of his ties before. For those who have yet to have Bungarden or see his massive tie collection, there is no need to fear. Bungarden plans on wearing his many distinctive ties until the end of his career.