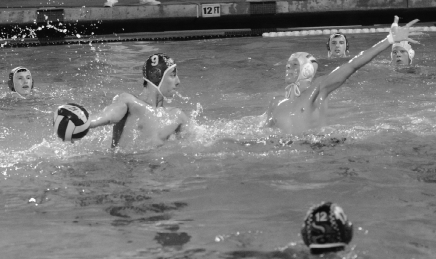 Anna Moragne
Sports
November 20, 2015
It was a tough loss for the Palo Alto High School’s boys water polo team at Central Coast Sectionals (CCS) in their first game against St. Francis High School 15-4 on Nov. 14. The season ended on a short and rough note, and the boys will not continue to play in any more games at the CCS tournament.

The boys knew that they would have a tough road ahead of them going into CCS, but regardless, they are still happy with how their overall season went.

“I’m happy and relieved that we were seeded where we were,” senior captain Kevin Bowers said. “But it’s no reason to get overly confident; teams are very solid that far in the tournament.”

With somewhat of a shaky start earlier in the season, the team was able to play well enough at the Santa Clara Valley Athletic League tournament (SCVAL) in order to place them as sixth seed in the CCS tournament.

“We’re a very competent team that has had great success against great teams,” Bowers said. “I trust my teammates and while we definitely did have some tough losses in the season  I think we knew what had to be done to make it to CCS.”

In the first game of the SCVAL tournament, the Vikings faced off against Mountain View High School and lost 4-6 in a tough match. The loss was unexpected since the boys had already beaten Mountain View twice this season. At this point, with their morale low, a place in the CCS tournament was no longer guaranteed for the team, causing the boys to feel on edge.

Luckily, the boys were able to remain composure and win two days later when they played Monta Vista High School in a game that ended 9-8. This game was a test of the team’s endurance after losing to Monta Vista in their past two encounters.

This past win proved necessary in order to heighten the team’s morale right before they entered the CCS tournament.

Overall, the boys were happy with how they played this year and had a good season with many hard fought games and well deserved wins.

“It’s a blessing having been able to play for this team this season,” Bowers said. “I’ve played with many of the guys here for three or more years, and it means a lot to me being able to finish my high school career alongside them.”