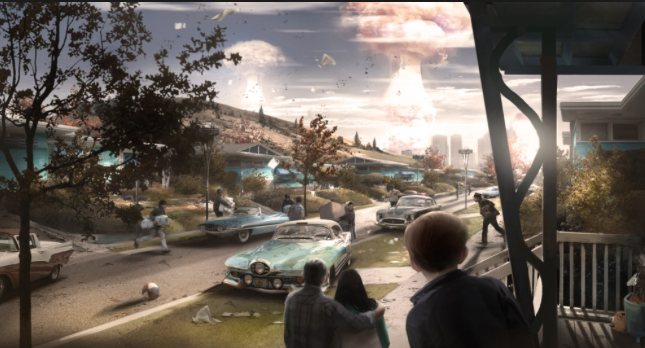 Fallout 4 features a post-nuclear world in which players fight villans and monsters.

Lifestyle
November 20, 2015
Most of the way Fallout 4, a huge roleplaying-shooter game, works is carried over from its excellent predecessors, Fallout 3 and Fallout: New Vegas. It is the Skyrim to Fallout 3’s Oblivion, if you will — it iterates on the previous game’s already amazing systems, and it is similarly dense with locations to explore, genuinely creepy monsters to fight and superbly engrossing post-nuclear atmosphere that blends unsettling gore and death with dark comedy. After more than 20 hours played, I may have seen an ending, yet I feel like I have only begun to explore its extraordinary world. From the looks of it, I will easily be able to spend another 100 happy hours here and still see new and exciting things.

A story that begins as a basic search for your lost family evolves into something much more complex and morally nuanced. Like in Fallout: New Vegas, we are drawn into a struggle between several groups competing for control of the region. Deciding which of their imperfect post-apocalyptic philosophies to align with made me pause to consider how I wanted events to play out. Even the highly questionable Institute has a tempting reason to side with them, and turning away from them in my playthrough was not as clear-cut a choice as I had expected. I was impressed by the sympathy shown toward the villains, too — even the most irredeemable murderer is explored and given a trace of humanity.

Of course, as is the tradition with developer Bethesda Game Studios’ open-world RPGs, the main story is not nearly as gripping an attraction as the huge number of well-written side quests you will come across just by wandering through the ruins of the Boston area, now known as The Commonwealth. I found it difficult to complete even the most basic point-A-to-point-B task without being sidetracked at least twice by enticing detours. An abandoned comic book publisher office? How can I not explore it? Boston’s famous Fenway Park? Gotta see what has become of that. A crumbling high school with heads on pikes outside? I bet there is great loot in there! Practically tripping over new discoveries like this, I feel like a kid on Easter whose parents are bad at hiding the candy.

Exploration has its own rewards, as this is the most diverse Fallout world yet, with dilapidated urban areas, ominous dead forests, eerie swamps, a desolate area mired in a hellish radioactive haze and even some areas that look borderline hospitable like beaches and budding farms. The Commonwealth is more colorful than Fallout 3’s Capital Wasteland, though it has its fair share of greys and browns and it shares New Vegas’ bright blue sky (as opposed to oppressive clouds) when it is not night time or raining or green with a terrifying radiation storm. It is often beautiful. Attention to detail is evident everywhere — Fallout 4 might not be a leader in all areas of graphics technology (character animations are still a weakness) but from the intricate Pip-Boy wrist-computer interface (which completely changes when you’re in power armor), to careful arrangement of skeletal remains that tell the tragically dark or tragically funny stories of long-dead characters, to tattered poster art on the walls, to even raindrops on your visor (if you are wearing one) it is consistently impressive.

Fallout 4’s crafting system gives even more motivation to compulsively collect everything that is not nailed down. It is so easy, too — grabbing things out of containers happens quickly in window that pops up when you look over it. Every item in the world is made up of material components, most of which you can intuitively guess: bottles are needed for glass, a desk fan will provide you with steel and gears and a roll of duct tape is worth its weight in gold. I once went on a desperate search for pencils so that I could extract the lead they contained to use for radiation shielding. (Apparently Fallout’s alternate universe never switched to graphite). Nothing is completely worthless, which means that managing the weight of your inventory is a constant series of agonizing decisions of what to take with you and what to leave behind.

The value of those materials comes from their use in the fantastic equipment upgrades, which give most guns you pick up extraordinary potential for flexibility and longevity. Stopping at a crafting bench with the right components in hand can turn a pistol into a short-range, pray-and-spray automatic or a scoped sniper with a long barrel for accuracy and a big stock to reduce recoil. A few tweaks to a standard-issue laser rifle can add burning damage over time, or split the beam into a shotgun-like spread. The best part is that those changes aren’t just tweaked numbers in the stats; nearly every modification you make is reflected in the look of your gun as well, creating an extremely varied selection of weapons both for you and for enemies.

The world, exploration, crafting, atmosphere and story of Fallout 4 are all key parts of this hugely successful sandbox role-playing game. Great new reasons to obsessively gather and hoard relics of happier times, strong companions and sympathetic villains driving tough decisions make it an adventure I will definitely replay and revisit. Even the technical shakiness that crops up cannot even begin to slow down its momentum.