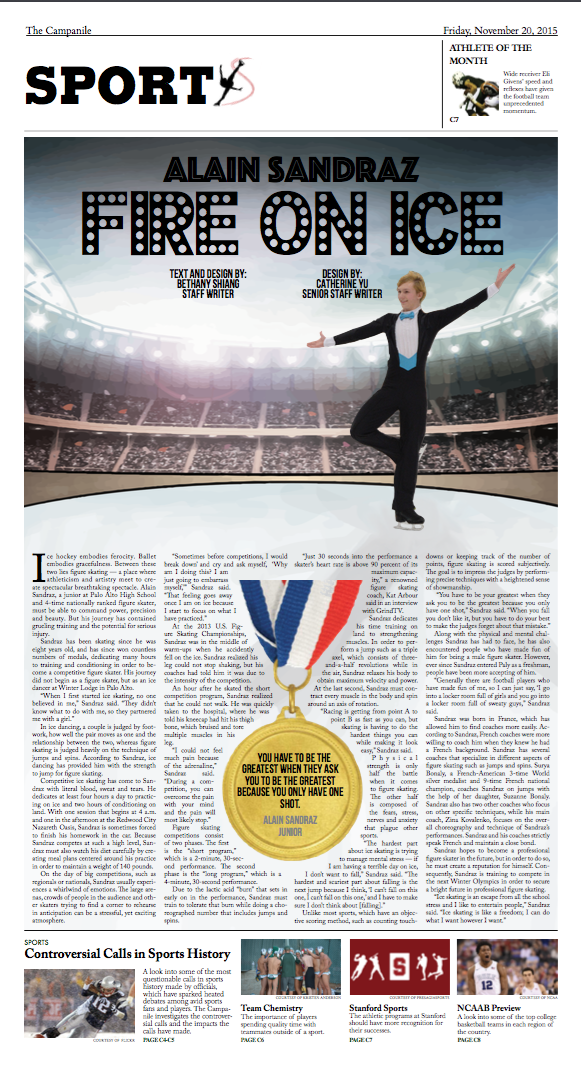 Sandraz has been skating since he was eight years old, and has since won countless numbers of medals, dedicating many hours to training and conditioning in order to become a competitive figure skater. His journey did not begin as a figure skater, but as an ice dancer at Winter Lodge in Palo Alto.

“When I first started ice skating, no one believed in me,” Sandraz said. “They didn’t know what to do with me, so they partnered me with a girl.”

In ice dancing, a couple is judged by footwork, how well the pair moves as one and the relationship between the two, whereas figure skating is judged heavily on the technique of jumps and spins. According to Sandraz, ice dancing has provided him with the strength to jump for figure skating.

Competitive ice skating has come to Sandraz with literal blood, sweat and tears. He dedicates at least four hours a day to practicing on ice and two hours of conditioning on land. With one session that begins at 4 a.m. and one in the afternoon at the Redwood City Nazareth Oasis, Sandraz is sometimes forced to finish his homework in the car. Because Sandraz competes at such a high level, Sandraz must also watch his diet carefully by creating meal plans centered around his practice in order to maintain a weight of 140 pounds.

On the day of big competitions, such as regionals or nationals, Sandraz usually experiences a whirlwind of emotions. The large arenas, crowds of people in the audience and other skaters trying to find a corner to rehearse in anticipation can be a stressful, yet exciting atmosphere.

“Sometimes before competitions, I would break down’ and cry and ask myself,  ‘Why am I doing this? I am just going to embarrass myself,’” Sandraz said. “That feeling goes away once I am on ice because I start to focus on what I have practiced.”

At the 2013 U.S. Figure Skating Championships, Sandraz was in the middle of warm-ups when he accidently fell on the ice. Sandraz realized his leg could not stop shaking, but his coaches had told him it was due to the intensity of the competition.

An hour after he skated the short competition program, Sandraz realized that he could not walk. He was quickly taken to the hospital, where he was told his kneecap had hit his thigh bone, which bruised and tore multiple muscles in his leg.

“I could not feel much pain because of the adrenaline,” Sandraz said. “During a competition, you can overcome the pain with your mind and the pain will most likely stop.”

Due to the lactic acid “burn” that sets in early on in the performance, Sandraz must train to tolerate that burn while doing a choreographed number that includes jumps and spins.

“Just 30 seconds into the performance a skater’s heart rate is above 90 percent of its maximum capacity,” a renowned figure skating coach, Kat Arbour said in an interview with GrindTV.

Sandraz dedicates his time training on land to strengthening muscles. In order to perform a jump such as a triple axel, which consists of three-and-a-half revolutions while in the air, Sandraz relaxes his body to obtain maximum velocity and power. At the last second, Sandraz must contract every muscle in the body and spin around an axis of rotation.

“Racing is getting from point A to point B as fast as you can, but skating is having to do the hardest things you can while making it look easy,” Sandraz said.

Physical strength is only half the battle when it comes to figure skating. The other half is composed of the fears, stress, nerves and anxiety that plague other sports.

Unlike most sports, which have an objective scoring method, such as counting touchdowns or keeping track of the number of points, figure skating is scored subjectively. The goal is to impress the judges by performing precise techniques with a heightened sense of showmanship.

“You have to be your greatest when they ask you to be the greatest because you only have one shot,” Sandraz said. “When you fall you don’t like it, but you have to do your best to make the judges forget about that mistake.”

Along with the physical and mental challenges Sandraz has had to face, he has also encountered people who have made fun of him for being a male figure skater. However, ever since Sandraz entered Paly as a freshman, people have been more accepting of him.

Sandraz was born in France, which has allowed him to find coaches more easily. According to Sandraz, French coaches were more willing to coach him when they knew he had a French background. Sandraz has several coaches that specialize in different aspects of figure skating such as jumps and spins. Surya Bonaly, a French-American 3-time World silver medalist and 9-time French national champion, coaches Sandraz on jumps with the help of her daughter, Suzanne Bonaly. Sandraz also has two other coaches who focus on other specific techniques, while his main coach, Zina Kovalenko, focuses on the overall choreography and technique of Sandraz’s performances. Sandraz and his coaches strictly speak French and maintain a close bond.

“Ice skating is an escape from all the school stress and I like to entertain people,” Sandraz said. “Ice skating is like a freedom; I can do what I want however I want.”