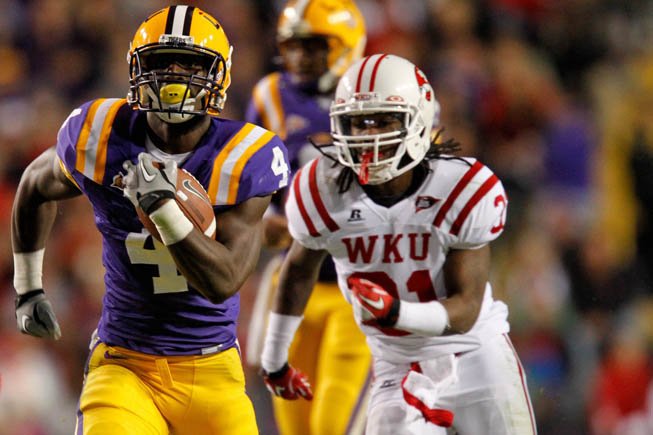 LSU’s game against Western Kentucky gave the team a break amidst its tough season.

Sports
November 20, 2015
In National College Athletics Association football, weaker conference teams playing top tier teams initially seems odd as it appears to bring little benefit to the smaller programs, but these games are beneficial to both programs. These powerhouse programs pay a lot of money to play weaker football teams. For example, the University of Buffalo was paid $1.5 million from playing three non-conference road games in one season, and used the money to buy new furniture for its complex and upgrade its weight room.
Conferences such as the Southeastern Conference (SEC) consistently have strong football teams, as they recruit very well. SEC teams so powerful that their teams need to play teams from weaker conferences to balance the higher-ranked team’s schedules with the difficulty of schedules of teams in other conferences. SEC teams — Alabama, Louisiana State University (LSU), Georgia, Florida and Texas A&M — are constantly playing each other and competing for top ranking positions. Earlier in the season, Alabama lead by coaching great Nick Saban lost to Ole Miss, but Alabama recently beat the second-seeded LSU. There is so much fierce competition within the SEC compared to other divisions that playing average teams outside the SEC is necessary to even out the SEC teams’ schedules with other Power Five, a term given to the five leagues with the strongest athletic programs division teams.
Weaker teams face potential embarrassment and possibly injury, but can reap high reward. When the University of Louisiana Monroe (ULM) plays a team like third-seeded Alabama, they will likely get demolished and run a higher risk of injury. Just imagine a monstrous Alabama linemen sacking the undersized ULM quarterback Garrett Smith. That will leave a mark; it is not going to feel good for the smaller quarterback.
However, weaker teams also receive some benefits — they have the opportunity to shock the nation and pull off upsets. If a smaller team pulls off an upset, it shows they have true potential. In 2005, University of California at Davis upset Stanford head coach Walt Harris on his home debut. Davis had lost their previous two games to Division II teams Portland State and New Hampshire. The Stanford upset was devastating for Cardinal fans who were hoping for a strong year, but fantastic for the rest of the nation.
Playing weaker teams also gives teams with tough schedules a chance to revitalize. LSU, prior to playing Arkansas (Arkansas) actually beat LSU), had matchups against Florida, Western Kentucky and Alabama. Playing Western Kentucky was pivotal to LSU’s recovery from its difficult game against Florida so it could boost its confidence and reenergize before playing Alabama away from home in Tuscaloosa.
Playing a weaker opponent is risky for power conferences, since a loss could be highly detrimental to their season. In 2007, unranked Appalachian State upset fifth-seeded Michigan 34-32 in the first week of play. Michigan dropped out of the rankings in the Associated Press Poll and did not reappear in the rankings until week seven at 24th in the nation.
The money that smaller football programs receive is necessary in order for them to succeed in the future. Many smaller football programs receive inadequate funding, and the money they are paid to play Power Five conference teams can be used to improve their programs. The money can be used to improve recruiting and facilities and subsidize program costs.
On Aug. 30, 2014, Michigan paid Appalachian State a lofty $1 million to play one game in the Michigan stadium. In the same weekend, Oregon paid $525,000 for South Dakota to play a game at Oregon. On that particular weekend, college football teams paid their opponents a total of $12.9 million.
These powerhouse football programs can afford to pay such large sums of money for weaker programs to play in their house. Michigan’s football stadium, for example, can fit nearly 110,000 people and can fill all of these seats regardless of the opponent. It is a win-win for these powerhouses, since they have very high chances of winning and they are still able to pack their stadiums.
Home-and-home series are deals in which teams alternate locations and payment every year for games, with teams such as Alabama and LSU participating in these series. The teams pay each other this way because when LSU comes to play Alabama at home, Alabama will absolutely sell out their stadium and can significantly raise ticket prices.
Smaller football teams such as the University of Buffalo often do not require a home-and-home series, meaning the better team does not have to visit the following year.
This benefits the better team, which does not have to play a game at the weaker opponents stadium the next year.
Stronger programs then have an open date for the following year which they can use to schedule another game against a weak opponent. This gives flexibility to the better team, as they can decide to play another Power Five conference team to make their schedule more challenging in attempt to better their ranking.
Northwestern pulled off an upset against Stanford during the first week of the 2015-16 season, which demonstrated that Northwestern had potential to succeed. Polls have recognized this: as of week 12 they are 20th in the Bowl Championship Series poll.
There are pros and cons to organizing match ups between Power Five conference teams and smaller conference teams. The smaller school gets a chance to put in a name for itself out there and is compensated for its play, so it can improve its program.
Type to search or hit ESC to close
See all results