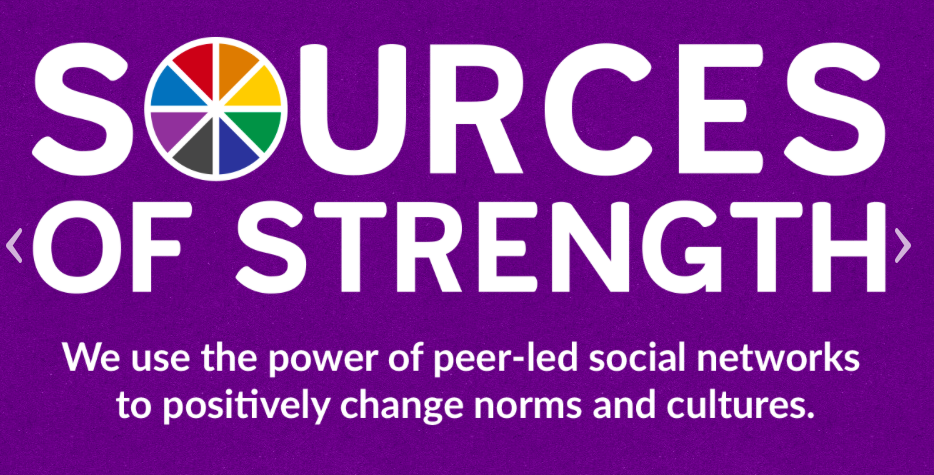 At the start of the current school year, Palo Alto High School began the process of implementing Sources of Strength (Sources), an evidence-based mental health wellness program, as a new school-wide health initiative to create a positive atmosphere on campus and to provide early preventative and protective measures against mental illness and suicide. Sources seeks to utilize the power of social networks to change social norms and prevent outcomes of bullying, substance abuse, violence and suicide by creating a culture of connectedness, resilience and strength. Through the powers of peer influence and social media, Sources at Paly aims to connect students to professional help and trusted adults.

“The idea of Sources of Strength is to focus on this broader culture of well-being so that students feel safe and comfortable and do not need focused attention, either from support services, counseling or suicide crisis intervention,” Josh Bloom, the Social-Emotional Learning TOSA and one of Sources’ advisors at Paly, said.

The Atlantic, The New York Times, the National Public Radio (NPR) and other major national publications have written articles that portrayed Paly’s competitive atmosphere as detrimental. On May 10, NPR described Paly in an article titled “In Palo Alto’s High-Pressure Schools, Suicides Lead To Soul-Searching” as a highly competitive school that subjects students to stress and high expectations posed by the school. Sources seeks to alter the media’s negative portrayal of Paly by alleviating the fixation on student suicides through positive activities.

“Part of what we’re trying to do is trying to change the narrative from ‘Palo Alto is the place for suicides’ or ‘Palo Alto is the community where everybody gets so stressed out that they have to jump in [front of] trains’ to ‘[Palo Alto’s] culture is the place filled with resilience’,” Paly’s Mental and Health and Wellness Coordinator Jonathan Frecceri said. “This is a place where people will bounce back. This is a community where we can utilize Sources of Strengths to find a way to overcome challenges.”

The implementation of the Sources of Strength program has been divided into two parts: establishing adult advisors and peer leaders and starting student-led projects throughout the school known as “campaigns.”

To establish a peer leader team, students were nominated by more than one adult on campus as somebody who has been acknowledged as being a positive influence to other peers. Bloom and Frecceri asked the staff to nominate those that the adults saw fit as positive leaders in the Paly community. A total of about 150 peer leaders were nominated by the staff. The list was narrowed down to about 60 to 70 peer leaders based on peer groups and student background, in order to attain diversity in the peer leader team.

The peer leaders and adult advisors then started to plan for Paly’s first campaign event, “Naming and Thanking Trusted Adults.” This campaign is intended to acknowledge these adults and point out more trusted adults so students who are struggling can seek them out through peer recommendations.

The Sources of Strength program separates its 25 adult advisors and 68 peer leaders into “campaign teams,” which implement the theme in different ways, including art, events and social media. For example, the visual arts team will create a poster filled with sticky notes where students can write what they are thankful for and names of trusted adults.

Sources does not send messages of shock, sadness and trauma but instead delivers messages of hope, help and strength. Sources uses peer leaders as connectors between Sources and other students, and not to train peers to become peer counselors or psychologists who are there to solve other problems.

Senior Sylvia Targ, one of the peer leaders on the Paly campus, has seen benefits for both herself and other Paly students.

“I want to be just as helpful and emotionally supportive to all my friends and all those other people in my life because I know first hand how important that is,” Targ said. “Sources of Strength has helped me, by helping other people.”