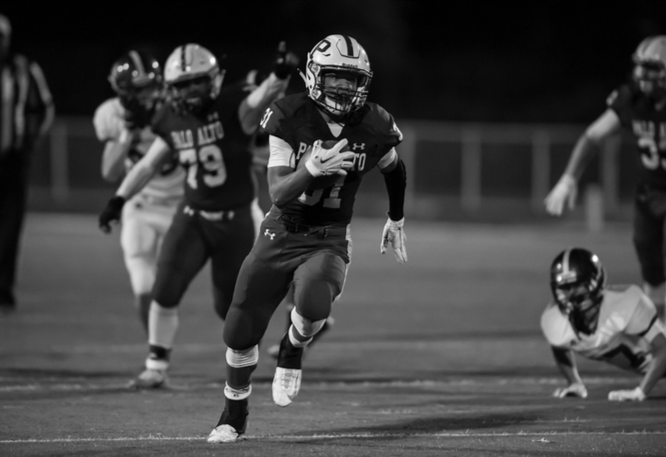 Sophomore Paul Jackson III runs for a touchdown in the game against Homestead High School. The Vikings went on to win 45-7.

Sports
November 20, 2015
On Oct. 30, the Palo Alto Vikings celebrated Senior Night with a sweeping 45-7 victory over Homestead High School. Senior Eli Givens returned the first kick off for a touchdown, easily maneuvering through the Mustangs’ defense and into the end zone. The Vikings went on to score five more touchdowns and one field goal, while the Mustangs only managed one touchdown halfway through the second quarter.

The game was the Vikings’ first Senior Night victory in three years and began with the traditional Senior Night ceremonies, recognizing the senior players and their families. More significantly, the Vikings’ win meant they had secured a spot in the top four teams of the De Anza League, placing them in the Central Coast Section (CCS) playoffs.

[pullquote speaker=”Bryant Jefferson” photo=”” align=”left” background=”on” border=”all” shadow=”on”]Our cornerbacks have been working hard since the last game, and we’re ready to take on the next team.[/pullquote]

The Vikings played their last regular season game two weeks later on Nov. 13 at Wilcox High School. The Wilcox Chargers beat them last season, 20-19, and this year’s game saw the same intensity. Disappointingly, the Vikings left Fitzpatrick Field in Santa Clara with another loss, this time by a score of 59-43. Palo Alto and Wilcox combined for 47 points in the fourth quarter, but that was not enough for the Vikings to pull through and redeem last year’s loss. Both teams fought until the final whistle, ending with a combined 786 yards.

The Vikings entered the game prepared; they were coming off of a bye week. After taking the ball from their own 20-yard-line with one minute and a half to go, the Vikings managed to tie the game with only 53 seconds on the clock. Quarterback Justin Hull threw to teammate Riley Schoeben, who ran the ball from the 43-yard-line to the 33-yard-line. Then the following personal foul took the ball further down to the 18-yard-line. The next play by the Vikings was the highlight of the night. On first down, Hull handed off to Eli Givens, who then threw overhand to Schoeben, who was 15-yards back. Schoeben then threw back to Hull who had gotten into the end zone. After this touchdown pass, Hull threw back to Schoeben for a 2-point conversion, tying the game at 43-43. Despite the Vikings’ efforts, the Chargers ultimately came out on top, finishing with a score of 59-43. The Chargers repeated last year’s victory after an incredibly heavy final minute.

“The loss didn’t get us down because we knew we had at least one more game after,” sophomore defensive back Bryant Jefferson said. “Our cornerbacks have been working hard since the last game and we’re ready to take on the next team.”

The Vikings play their first playoff  away game on Nov. 20 against Salinas High School. If they win, they will continue to play the victor of the Alvarez-Milpitas game, with Milpitas (No. 2) favored to win.

“It was tough … we had two weeks to prepare for this game and we went into the game prepared but somehow we just couldn’t come out with the win,” junior right guard Troy Henderson III said. “We’ve just got to come into playoffs and dominate, just keep winning. We’re going to come back hard and we aren’t letting the loss phase us like it did the last game. I’ve got a good feeling about this playoff season, it’s going to be a good one.”