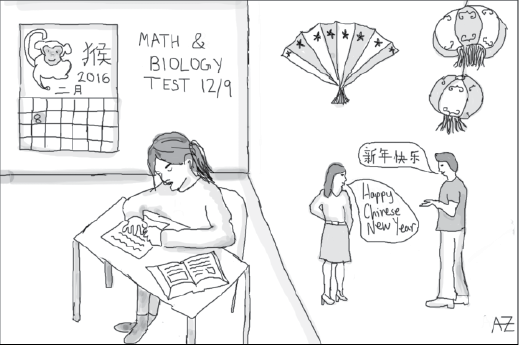 Absences for religious holidays should be recognized

As December passes by, many students are looking forward to the 2-week winter break to celebrate Christmas and New Year’s. The extended time off from school allows students to truly appreciate the holidays with their friends and family, free from tests, assignments and projects.

However, many students celebrate different holidays which may be less commonly celebrated, but are just as important. When celebrating these less popular holidays, students do not have the luxury of taking a breather from school during that time. Palo Alto High School is a melting pot of cultures, religions and ethnicities, encompassing a variety of holidays throughout the year. Yet, the Palo Alto Unified School District does not offer the same consideration to all major cultural and religious holidays.

Although it is not feasible for the district to grant days off for every holiday that arises, teachers should be sensitive in terms of schoolwork during major cultural and religious holidays.

Given the separation of church and state, it is neither the district’s nor the teacher’s job to decide which holidays merit a day off; however, teachers should respect a student’s decision to miss school due to religious or cultural purposes.

Although the Paly Student Handbook states that absences due to “religious purposes” are warranted and excused, junior Molly Weitzman has repeatedly struggled with being absent on major Jewish holidays.

“I had told all of my teachers that I would be gone [on Yom Kippur and Rosh Hoshana,]” Weitzman said. “But some [teachers] did not let me make up work, did not tell me what I would miss when I asked and did not give me any materials that I needed for the missed classes.”

Despite officially being deemed as absences excused by the school, missing class for religious purposes seems to have less credibility among teachers. The the fact that teachers do not acknowledge religious absences to be as valid as say, health related absences, contributes to the notion that students do not deserve to celebrate their religious and cultural holidays.

Additionally, cultures that may not be considered religious, also have important holidays which have just as much right to be warranted and excused as well.

Pertinent cultural holidays such as Chinese New Year and the Mid Autumn festival receive no accommodation from the school despite being celebrated by the majority of the large population of Chinese students at Paly. Though the dates of these holidays vary from year to year, they tend to land on weekdays. Students are often unable to fully experience these festivities, and other holidays, that are so central to their culture, due to schoolwork. Given the popularity of these holidays, teachers should be more lenient and grant extensions as needed so that students can enjoy the holidays as intended.

Adding days off from school in order to accommodate all major cultural and religious holidays would be a logistical nightmare on behalf of the district. Furthermore, having the district dictate which holidays are worthy of a day off could potentially trigger more issues of inequality and discrimination.

Instead, the district should work on improving the experience for students who attend school on major religious or cultural holidays in order to make the holiday less stressful.

Teachers need to be more aware of upcoming major cultural and religious holidays. This way, teachers can be better prepared when these holidays arises, and the students can more easily request extensions or make-up work. On top of that, all religious and cultural holidays, that do not already have a day off, should be accommodated equally to avoid discrimination, favoritism or an amalgamation of the church and state.

With the ever-increasing academic workload, it is of the utmost importance that all students have the equal opportunity to celebrate their religions and cultures with minimal school related stress.