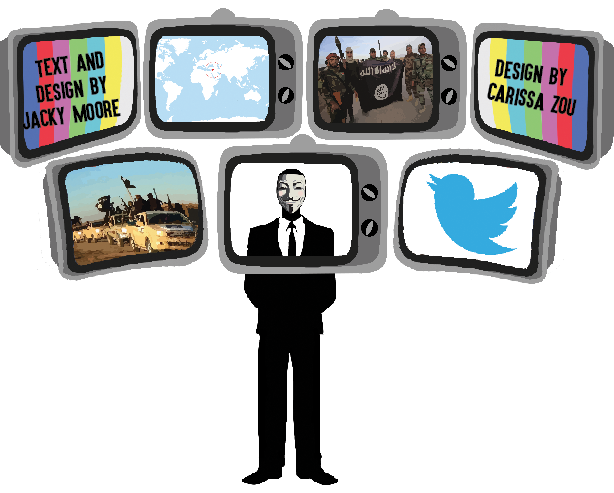 Following the terrorist attacks in Paris on Nov. 13, online hacktivist group Anonymous launched retaliatory maneuvers on the Islamic State of Iraq and Syria (ISIS) via Twitter. Anonymous has worked to cripple the militants’ efforts to use social media platforms to indoctrinate potential supporters.

Anonymous is associated with a faceless figure in a suit in addition to the white, moustached Guy Fawkes mask. The organization works collectively to attack certain groups, the most notable of which are PayPal and the U.S. government. They lack a singular leader and are instead organized by groups of hackers with common interests.

After hacking a given website, they leave behind their logo, occasionally with their slogan: “We are Anonymous. We are Legion. We do not forgive. We do not forget. Expect us.” 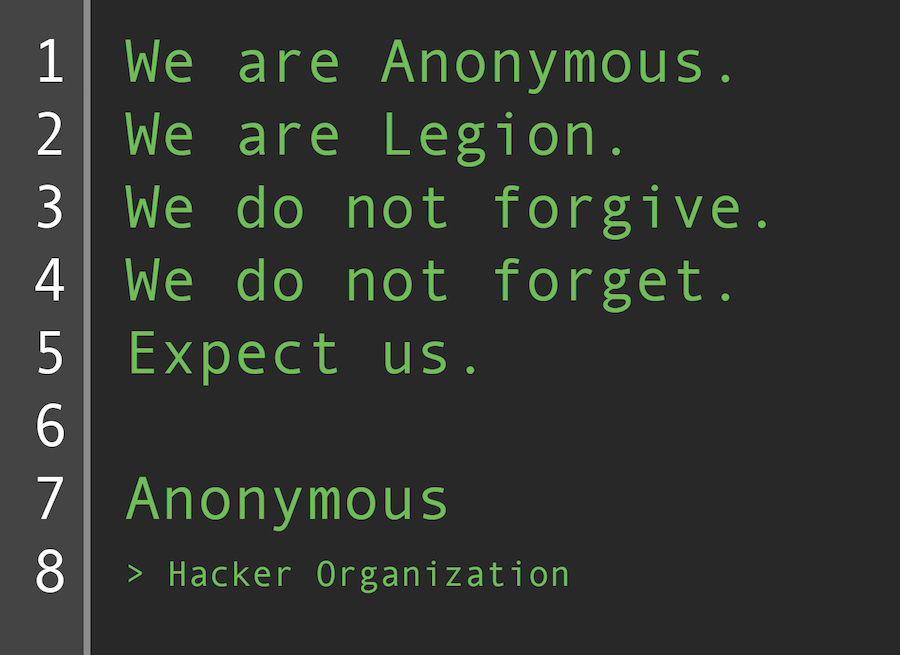 This specialization in different fields of attack has proven to be effective in Anonymous’ latest endeavor against ISIS: Operation ISIS (also called Operation Paris). The movement began in retaliation against the November attacks in Paris and is designed to hobble ISIS’s online influence. Different groups of hackers in Anonymous are focusing on certain aspects of the hack, ranging from flagging ISIS Twitter accounts, alerting Twitter of ISIS propaganda and violence and shutting down ISIS’s servers.

The ISIS Twitter Census, a report published earlier this year by the Brookings Institution, states that “Much of ISIS’s social media success can be attributed to a relatively small group of hyperactive users, numbering between 500 and 2,000 accounts, which tweet in concentrated bursts of high volume.” The same study stated that there are roughly 6,000 active pro-ISIS accounts on Twitter alone at any given time, each with an average of 1,004 followers.

Out of the social media platforms on which ISIS has established a dedicated following, Twitter has proven to be one of the most effective.  The speed with which media can be shared on Twitter allows ISIS to disseminate information internationally.

On the day of the Paris attacks, an Anonymous hacker with the handle @CtrlSec tweeted that a total of 72,079 ISIS Twitter accounts had been suspended.

@CtrlSec and other hackers are currently using the handle @OpParisOfficial and the hashtags #OpIceISIS and #OpParis to organize their tweets into main, easily identifiable streams.

Anonymous officially declared war against ISIS on Nov. 16 in a video posted to YouTube. The clip featured a member of Anonymous wearing a Guy Fawkes mask and speaking in French.

“Expect massive cyber attacks,” the spokesman for the hacker group said. “War is declared. Anonymous from all over the world will hunt you down.”

Anonymous is working to cripple ISIS’s Twitter success by flagging ISIS-related accounts for deletion and spamming pro-ISIS hashtags with unrelated content. On Nov. 24, @OpParisOfficial tweeted, “Our first, yet simple hashtag to #RickrollDaesh is #SupportISIS. Simple, but just our starter. Remember to post the video link. Have fun.” Posting the “video link” refers to spamming the pro-ISIS hashtags, referring to the group as Daesh, with videos of Rick Astley’s “Never Gonna Give You Up.”

The hacktivists also use conventional maneuvers to combat ISIS, notably Distributed Denial of Service (DDoS) attacks. These attacks involve rendering online servers inoperative by flooding them with traffic from unknown origins. This type of attack is not uncommon and is a signature attack of Anonymous. 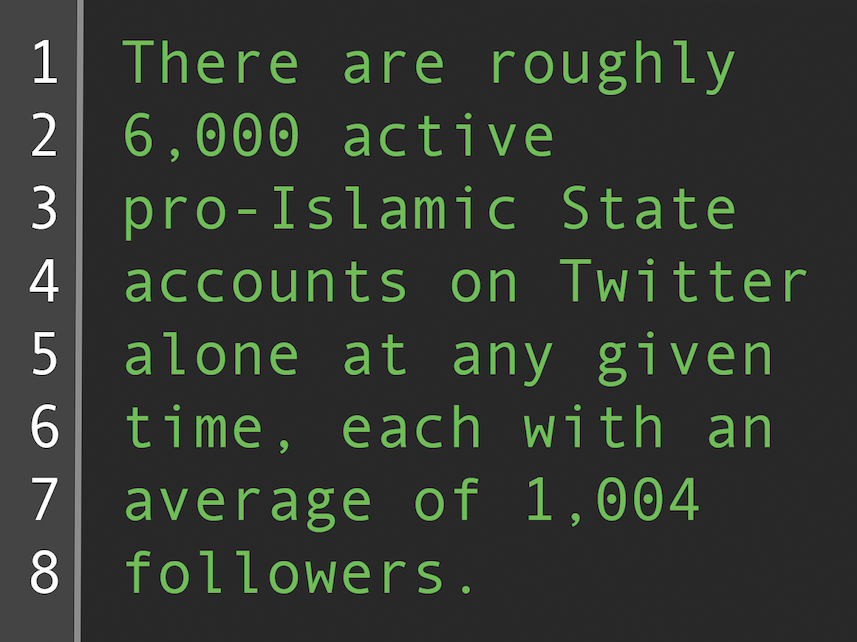 An elite sector of Anonymous fighting ISIS is Ghost Sec. According to their website, Ghost Sec’s mission is to “eliminate the online presence of Islamic extremist groups… in an effort to stymie their recruitment and limit their ability to organize international terrorist efforts.” The website provides a form to report pro-ISIS content and social media accounts. Ghost Sec has explicitly stated that its methods of attack include the flagging of the content in question to the host platform and, should that fail, “the employment of digital weapons to forcibly remove content.”

On Nov. 27, Ghost Sec hacked an ISIS propaganda website, changing the website to display “Too Much ISIS.” ISIS’s content has been replaced by an advertisement for the online pharmacy CoinRx and the statement, “Enhance your calm. Too many people are into this ISIS-stuff. Please gaze upon this lovely ad so we can upgrade our infrastructure to give you ISIS content you all so desperately crave.”

Certain Twitter accounts and websites such as the now-removed one hacked by Ghost Sec are run by agitators from ISIS to post threats, warnings and updates on ISIS to garner attention and supporters. Mass numbers of ISIS supporters tweet propaganda released by ISIS from other websites; the most infamous instance being the circulation of the video of the beheading of American journalist James Foley on Twitter. Additionally, ISIS propagandists urge their Twitter followers to spam popular hashtags with extremist content in a manner similar to that of Anonymous.

CNN estimates that more than 20,000 foreigners have migrated to pro-ISIS countries to fight for the extremist group, 3,400 of whom are from Western nations. Some join ISIS for the religious rewards it promises. Most recruits are young and attracted to the sense of purpose that ISIS offers.  Propaganda on social media plays a major role in influencing Westerners to join the extremist group.

“[ISIS] disseminates timely, high-quality media content on multiple platforms, including on social media, designed to secure a widespread following for the group,” former National Counterterrorism director Center Matthew Olsen said. “[ISIS] has used this propaganda campaign to draw foreign fighters to the group, including many from Western countries.”

Twitter has worked to remove ISIS-related content, helping to handicap the group’s social media influence. In August 2014, the company stated that it would take down media of the deceased.  This policy would also include photographs and videos of James Foley’s execution.

Additionally, Twitter has erased thousands of pro-ISIS accounts and images.  Despite the fact that creating new accounts is relatively simple, mass deletion of ISIS accounts makes it difficult for the extremists to maintain and gain supporters.

Some have called into question the morality of Twitter’s censorship. The social media platform has the capability to control what people can and cannot see of ISIS, drawing ire from those wanting the platform to accurately voice all of the opinions of the world.  Citing its terms of use, which do not condone terrorist material and their circulation on the social media platform, Twitter quickly shut down these protests.

“Twitter continues to strongly support freedom of expression and diverse perspectives,” a Twitter spokesperson said in an interview with the Washington Post.  “[But] the use of Twitter by violent extremist groups to threaten horrific acts of depravity and violence is of grave concern and against our policies, period.”