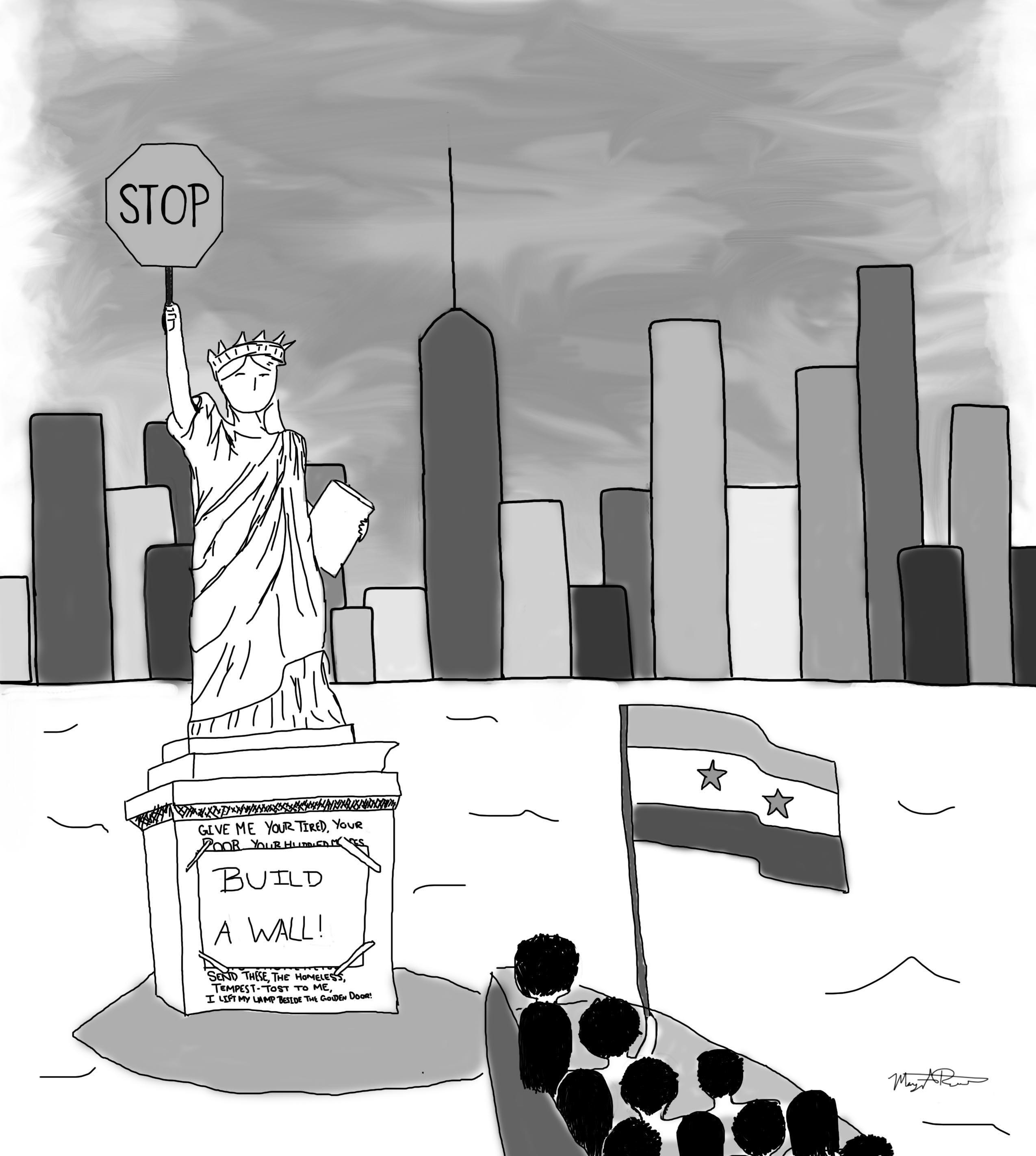 Fear-ridden Americans too harsh towards refugees

The American people are, understandably, a little apprehensive about Syrian refugees entering the United States after the terrorist attacks in Paris on Nov. 13, especially since the Islamic State of Iraq and Syria (ISIS) has vowed to wreak comparable havoc here in the United States. Our fear is justified, but it has gotten the best of us and we have reacted hastily, especially taking into consideration the 10,000 Syrian refugees that the Obama administration plans to accept into our country in the next year.

Many Americans have a strong opinion on the refugee crisis, in part precipitated by the countless news stories surrounding the admittance of Syrian refugees. According to a national poll conducted by Bloomberg Politics, about 53 percent of American adults do not want any Syrian refugees accepted into the United States. As of Nov. 25, 31 governors have stated that they will not allow refugees to be admitted into their states, despite the fact that they have no legal authority to refuse refugees.

Before forming an opinion, it is important to understand the background of the conflict in Syria, and to know how domestic tensions have escalated. The Syrian Civil War started in 2011 as the authoritarian government, led by President Bashar al-Assad, started cracking down on pro-democracy demonstrations. The use of heavy-handed force only spurred more of the country’s citizens to call for al-Assad’s resignation.

Additionally, because Syria’s borders were drawn up by Europeans, with no regard to religious, ethnic or cultural differences, there are many different factions fighting to gain political power in Syria. ISIS, which was formed in 2013, saw the instability of Syria’s government as an opportunity to usurp power and establish an Islamic caliphate in Syria. For almost five years now, Syrians have been subjected to the terrors of war, including chemical warfare and an internationally condemned means of attack by their own government.

Syrian refugees are as much victims of terrorism and ISIS as Parisians are. They have been forced out of their homes and onto the streets by war, and many are struggling to survive.

[pullquote speaker=”” photo=”” align=”left” background=”on” border=”all” shadow=”on”]These refugees are families who want a quality life — parents and children seeking asylum from a war that has shattered their country. They deserve our compassion and understanding.[/pullquote]

Because the refugees are from Syria and Iraq, where the Islamic State is based, it is easy to conjure up fears that the jihadi group has inserted its own members among the refugees in order to burrow into host societies and then spring their traps. However, posing as a refugee is a lot of trouble for a terrorist to enter this country. Refugees hoping to enter America have to go through a rigorous, lengthy process, which takes an average of 18-24 months.

The first step for a refugee hoping to get into America is to register with the United Nations High Commissioner Refugee Agency (UNHCR), which then makes a referral to a resettlement country. The UNHCR then collects biometric data, including iris scans for Syrians and other Middle Eastern populations and biological information.

Once a referral has been made, a U.S. government-funded refugee support center receives the refugee’s application. A file is created and information is collected to begin background checks that ensure the refugee is genuinely fleeing persecution or harm. The refugee background data collected by the government will be run through at least four independent databases.

The State Department maintains that the details of the background checks are classified, but it is known that the agencies that screen refugee candidates include the Federal Bureau of Investigation (FBI), the Department of Homeland Security, the State Department and the National Counterterrorism Center.

[pullquote speaker=”” photo=”” align=”right” background=”on” border=”all” shadow=”on”]Syrian refugees are as much victims of terrorism and ISIS as Parisians are. They have been forced out of their homes and onto the streets by war, and many are struggling to survive.[/pullquote]

Syrian refugee applicants undergo an additional screening by the Department of Homeland Security, the only refugee group required to do so. Syrian refugee cases may be referred for review to the U.S. Customs and Immigration Services Fraud Detection and National Security Directorate. If any new information comes to light, such as a previously used name or a different phone number, the entire screening process is repeated.

Once the background checks are completed, refugees must have a face-to-face interview with a Department of Homeland Security officer. During the interviews, officers are looking for associations with terrorist organizations and evidence that applicants provided material support for such groups, although it has been a challenge for officers interviewing Syrians to determine this.

Out of the 2,500 Syrian refugees taken in by the U.S. since 2011, 50 percent are children, and the rest are evenly split between men and women. Only two percent of refugees were single men of combat age, the demographic most likely to be involved with terrorist groups.

The process that refugees have to go through is extremely comprehensive and eliminates any significant threat of a terrorist entering America posed as a refugee. Of course, there is always a chance that one could slip through the cracks, but then there is also an equal, if not greater, chance that anyone entering the United States from anywhere else in the world, even somewhere such as Canada or China, could end up committing acts of terror.

According to data from the Migration Policy Institute, since the attacks on the Twin Towers on Sept. 11, 2001, the U.S. has admitted 784,000 refugees worldwide, and only three have been arrested for suspected terrorist activity. Two were trying to leave America to join terrorist organizations overseas, and the third was nowhere close to actually having a plan of terrorism to carry out.

Despite this, the Republican-controlled House of Representatives recently passed a piece of legislation that would put further screening procedures in place, requiring the director of the FBI, the secretary of Homeland Security and the director of National Intelligence to take the time to confirm that each and every Syrian and Iraqi refugee admitted into the country poses no threat.

But what this measure fails to acknowledge is that these refugees are families who want a quality life — parents and children seeking asylum from a war that has shattered their country. They deserve our compassion and understanding, not scrutiny and suspicion — especially considering that they just went through nearly two years of that during the screening process.

“We also have to remember that many of these refugees are the victims of terrorism themselves — that’s what they’re fleeing,” President Barack Obama said earlier this month in Turkey at a meeting of the Group of 20. “Slamming the door in their faces would be a betrayal of our values. Our nations can welcome refugees who are desperately seeking safety and ensure our own security. We can and must do both.”