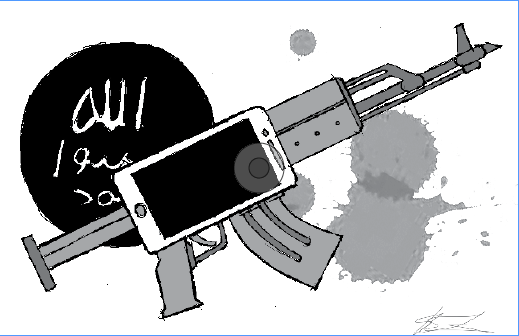 When a video displaying harrowing images of  American reporter James Foley being beheaded surfaced in mid-August last year, Americans were shocked by the barbarity of such an act conducted by a rising terrorist organization and dumbfounded by the terrorist group’s strong social media presence. The group soon emerged as the Islamic State of Iraq and Syria (ISIS), an extremist group primarily located in Iraq and Syria with the goal of establishing a new Islamic caliphate across the Middle East. Over a year later, ISIS has been widely discussed internationally as one of the most dangerous terrorist organizations.

[pullquote speaker=”” photo=”” align=”left” background=”on” border=”all” shadow=”on”]ISIS’s widespread recognition would have been impossible without modern technology and the coverage surrounding the recent string of horrid events perpetrated by this terrorist organization.[/pullquote]

ISIS has found success by inciting fear through social media which then enables it to spread propaganda. Unfortunately, the younger population, specifically those of the teenage demographic, are most susceptible to ISIS’s propaganda, and some are influenced by the false promises of ISIS recruiters. In order to limit further expansion, it is important that members of the demographic be aware of the tactics ISIS is using to recruit new members and spread its message.

ISIS’s widespread recognition would have been impossible without modern technology and the coverage surrounding the recent string of horrid events perpetrated by this terrorist organization. Graphic photos and videos that endlessly circulate the Internet are exactly what the organization has strategically used to gain traction and are what have isolated ISIS from other terrorist organizations such as Boko Haram and Kataib Hezbollah.

These groups are not known for employing social media as a terror tactic, but are instead known for their acts on a larger scale such as kidnapping 300 Nigerian schoolgirls or killing U.S. soldiers and instigating frequent rocket attacks. ISIS uses much more direct tactics, by spreading its messages through appalling publicity stunts and marketing itself on various social media sites.

ISIS has differentiated itself from similar groups through its strong online presence. Until recently, terrorist organizations would have made headlines through wide-reaching terror attacks. With today’s resources, all it takes is a viral video. President Barack Obama claimed ISIS’s members are solely “killers with good social media.”

ISIS has manipulated the Internet by creating gruesome videos, which may focus on one victim rather than many, and then become widely shared on all media outlets. Through this tactic, ISIS incorporates its central message of becoming an independent Islamic state. For instance, in the video where Foley was beheaded, the masked man said he was killing the 40-year-old American journalist in an act of retaliation for the recent United States’ airstrikes against the terrorist group in Iraq.

The terrorist organization has used social media to further its fight in multiple ways. The largest use has been for communication and coordination. ISIS has accounts on all of the largest media sites such as YouTube, Twitter and Facebook. They use these sites to promulgate their messages, plan attacks and distribute their videos. ISIS quickly moves from different networks to apply itself to different audiences, and creates thousands of new accounts, as many are quickly banned. Another strategy it has used has been to hijack popular hashtags. For example, it overtook the hashtag “#fifaworldcup,” and flooded the results to spread its message.

Not only have media outlets served as a tool to publicize ISIS, but they have also granted them a powerful platform for recruiting new members. ISIS specifically targets children and teenagers, mostly through different media sites. They exploit the youth by promising a better life and a way to escape difficult missions. Aqsa Mahmood, a British teenager, recruited by ISIS, said that the terrorist organization provides incentives for allegiance. “[They give you] a house with free electricity and water [is] provided to you due to the Khilafah (the caliphate or state),” Mahmood wrote in his blog about life under ISIS rule.

The promise of many financial and material benefits, as well as a sense of belonging and importance, is enticing to some vulnerable teenagers. Young people may be drawn to these recruiting techniques, as recruiters can be very deceiving.

The way that ISIS is using social media to further its campaign is a difficult problem to resolve. ISIS is very technologically advanced and has been ahead of government attempts to shut down their operations online, making the group difficult to monitor.

It is critical that people in the world are fully aware of potential ISIS propaganda that may influence certain youth to join. Awareness is the most important step to limit ISIS from expanding and preventing further advancements.

“It needs every school, every university, every college, every community to recognize they have a role to play, we all have a role to play in stopping people from having their minds poisoned by this appalling death cult,” British Prime Minister David Cameron said to the press.