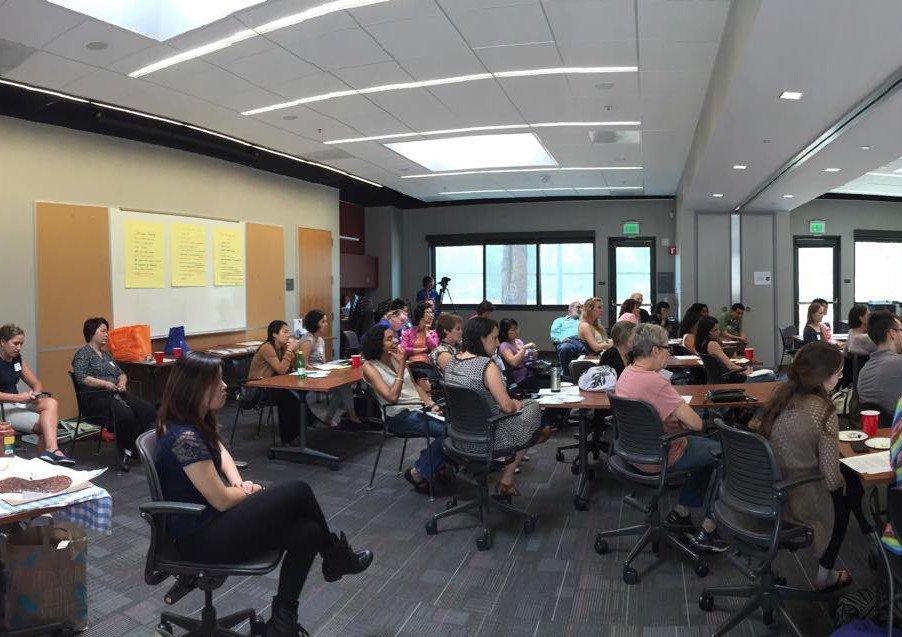 Community members listen to alumni discuss success and wellness at an event hosted through the Life After PAUSD series.

Alison Lyon and Krista Bortolin, both Paly alumni, were the two panelists who spoke at the event, along with two alumni moderators, Karl Gumerlock and Christine Chang. The Life After Paly panel was designed to continue previous dialogue from events that took place over these events, such as a discussion on mental health and a panel about success.  The summer events were organized by WOPAC members Jess Brooks and Christina Chen.

“This is the first [event] that we’ve actually organized ourselves, and we have a target at [having monthly discussions], but we’re not sure if we’ll meet that or if it’ll be more or less frequent,” Gumerlock said.

The Life After Paly panel drew 32 attendees. Many were students, but parents also attended and asked the panelists questions. Students, teachers and parents all expressed interest in holding another panel for others to attend.

“What speaks out to most high schoolers, in my opinion, is the fact that they didn’t have it all planned out and they didn’t know what they wanted to do,” junior Maddie Frick said. “They went with the flow, which is what we’re all kind of doing.”

The event took place during Tuesday’s tutorial period, offering students an effective way to use the now mandatory time.

“I think [panel discussions like Life After Paly] would’ve helped our class a lot because there were a lot of people who ended up in suicide prevention in college because they pushed so hard to get through high school, and then they had mental breakdowns when they got to college because it was just too much stress,” Paly Class of 2000 alumna, Bortolin said. “I think talking about it and maybe not putting so much stress on the future would definitely help all of you guys.”

Many of the panelists believe that education starts with parents, who were also advised to attend the events. They believed that if parents do not understand what children are experiencing, parents cannot help students.

“[Sharing experiences is important] because everyone is struggling to make it out,” Bortolin said. “It helps you choose your path and know that you’re not alone in choosing your path and that, even though Paly may be difficult now, there’s still more in the future.”

The panel opened up for the audience’s questions in the last 10 minutes of the talk. Overall, the speakers believed that the discussion allowed students to gain perspectives other than those of a teacher, peer or parent.

“I’d say you have to watch for opportunities,” Gumerlock said. “A lot of what I experienced in high school was that everything is nice and packaged; however, often opportunities will present themselves in ways that are not expected, and so you have to be looking out for those. And if people aren’t offering them, then go look for them. It’s about being open to opportunities, watching for them, taking them and then using that to inform your future decisions.”

The panelists stayed after the dialogue was over to talk with anyone who had remaining questions. Many students thanked the speakers, telling them that the discussions really helped them. The speakers comforted many worried students and found common interests with others.

“It is important to have [events like Life After Paly] because you can see that it isn’t all about high school and there is more beyond here,” Frick said. “And you will get there because these people have. Also, they both have gotten knocked down so many times and have had so many obstacles thrown at them, and yet they seem happy where they are.”

The aim of the series is to bring the accumulated knowledge and experiences from alumni back to students. The knowledge that the alumni are able to share with students allows them to look into other paths and gives them more perspectives as they head into the next few years.

WOPAC’s next event will be a panel on resilience in late December and will be held in the Mitchell Park Library.