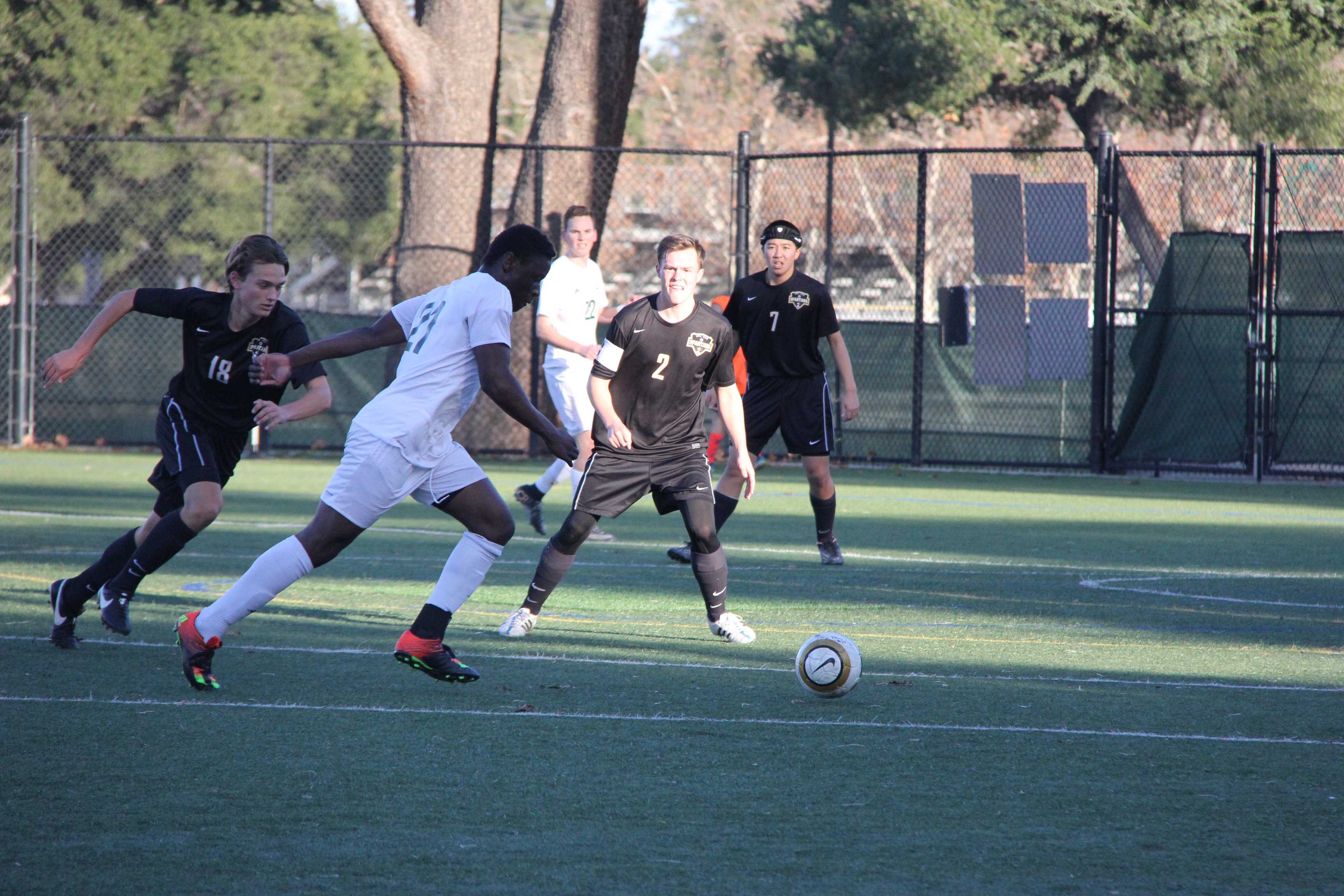 Team captain and senior Eli Friedlander believes that although the team has held an undefeated record thus far, there is still room for improvement.

“I think we’ve had a great season so far,” Friedlander said. “There are obviously still a lot of things we can improve on, but overall, we’ve done very well.”

The team currently has an overall record of 9-0 and won the Oak Grove championship during its preseason games. While the Paly boys soccer team has always done well in past seasons, junior Michel-Ange Dudesert believes that the combined skill set each player provides supplies the team with an edge throughout this season.

“I think this year we just have a lot of talent on the team, and when those talents connect, we can be very dangerous,” Dudesert said. “Chemistry was a big issue last year but not this year.”

The team this year is reasonably balanced between the amount of seniors, juniors and sophomores, which has contributed to the team’s success. Sophomore Xander Sherer acknowledges that while the team is made up of a diverse group of players, the teammates have the ability to focus on what matters when the time comes.

“I would attribute our undefeated score to our team’s winning mindset,” Scherer said. “Sometimes we mess around off the field, but once the game starts everyone is laser-focused.”

The mixed team has two sophomores this season, Scherer and Matt Knowles, and according to Dudesert, they earned their positions on the varsity team.

“I think the roster is solid,” Dudesert said. “I think the coach’s intention was to have a team with just enough underclassmen so that next year’s team could stay just as strong as this one, and that really wouldn’t be possible if we had 15 seniors graduating. The sophomores absolutely deserve their spots — it was a very good pick by the coach.”

All the athletes on the team have exemplified their ability to play against challenging varsity teams in the area and win with impressive score differences. Friedlander accredits the team’s successful season not necessarily to the team full of a variety of ages but instead to each player’s capacity to introduce a positive influence to the team.

“This year we have a really well-rounded team,” Friedlander said. “We have a lot of guys that can come off the bench and make a real difference.”

Each player provides a specific edge to the team, whether it is defensive or offensive. Dudesert believes that there is not one single player to look out for, but instead teammates that have great chemistry during their games.

“[Junior] Jack Stoksik scored three goals in two games, which gave him the title of “Athlete of the Week”,” Dudesert said. “Eli [Friedlander] is by far the best goalkeeper we’ve seen this season even when recovering from a broken wrist.”

To hold an undefeated record, a team must be not only physically fit, but mentally tough. It can be very easy for the team to get swept up in the numbers, but Friedlander knows that although it can be stressful, the boys are capable of dealing with the weight of their undefeated title.

“We’re just taking it one game at a time and trying to stay focused,” Friedlander said. “For us I think the expectations are just higher this year because of last year. Last year’s title also means that every team we play will want to knock us off this year.”

The boys soccer team members collectively believe that this is a special season, and Dudesert thinks that the team can qualify for the Central Coast Section (CCS) Championships.

“Our coach believes that we can go on to win the league like last year and even win CCS,” Dudesert said.