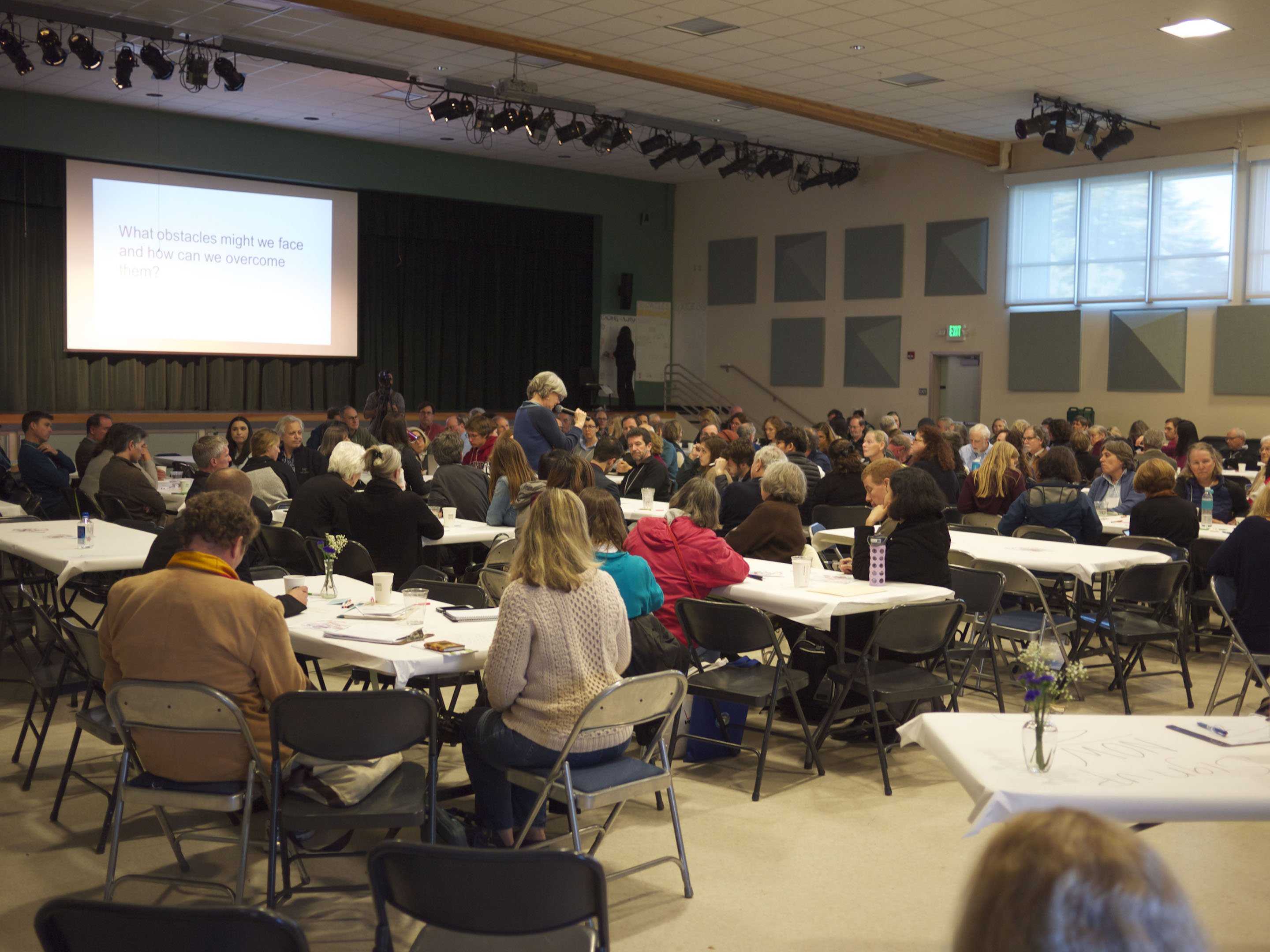 Those who participated in the Climate and Sustainability Summit focused on new techniques to curb gas-use practices at the meeting at David Starr Jordan Middle School.

Peter Maroulis
News
January 28, 2016
The City of Palo Alto will outline policies and procedures to be taken in the coming months in order to turn the local community into a more eco-friendly environment.

National unrest over climate change and internal civic concerns over gas power and traffic congestion inspired the City Council to appoint Palo Alto’s first-ever sustainability officer, Gil Friend, two years ago. Friend has been tasked with developing environmentally conscious city stratagems and most recently has masterminded the Climate and Sustainability Summit, which was held at David Starr Jordan Middle School on Jan. 24. The event was an open forum for Palo Alto residents, mediated by city officials. Guest speaker Mark Mykleby, a former Colonel in the Marines and environmental leader on the Joint Chiefs of Staff, gave the event’s opening speech.

“We need to make some bets for the next few years, which will hopefully open up new possibilities,” Friend said, referring to “an energy audit of homes, water heaters, leaks in driveways and efficiency improvements.”

Friend maintained that the goal of the sustainability plan was not only to present Palo Alto with an environmental boon, but also help improve everyday living in the city.

“We want to create better services with better economics and better environmental outcomes for our customers,” he said. “This is not a matter of trading off money with environmental benefits; it’s a matter of designing sound programs that pay out.”

During a keynote presentation at the Summit, Friend outlined several goals, including shifting “from natural gas to all electric systems when feasible,” driving “radical resource efficiency,” “reducing subsidies” and channeling “local and external investment.”

By encouraging the use of electric cars, electric office appliances, electric water heating and public transportation (inside and outside of Palo Alto), as well as championing eco-friendly business establishments in the city, proponents of the Summit hope to cut annual carbon emissions by 43 percent by 2030. The Jan. 24 meeting was intended as a launching pad for ideas and constructive criticisms by the community to kick off the program.

“It’s a good start in the right direction,” Greenfield said. “It’s a first start and they’re getting public insight for adjustments.”

Greenfield also felt that the benefits of the proposed sustainability program justify even a raising of city taxes.

“There’s no subject I am more passionate about and care more about than sustainability,” Greenfield said. “Sustainability is important enough that I would pay more for it.”

To temper fiscal concerns, Friend and his team have done financial analysis in order to determine the necessary steps to be taken in funding the project.

“We’ve identified about 18 different ways to finance this work, from general funding and utility [companies] such as Palo Alto Utilities to third party capital,” Friend said. “If you think sustainability is expensive, you’re doing it wrong.”

The State of California has set an optimistic pace, looking to curb gas emissions by 80 percent between 1990 to 2050, which Palo Alto is on track to do, having already reduced 37 percent of emissions since 1990. Having achieved such efficiency in reducing carbon emissions, Friend and other city officials hope to achieve the statewide 2050 goal 20 years early.

“To get to the California goal of 80 percent reduction in 2050 or anything more dramatic, we clearly have to transform transportation and our relationship with natural gas,” Friend said.

Such transformations would include those outlined in the Sustainability Summit, which are ultimately aimed at vastly reducing residential natural gas use.

Palo Alto is already one of the most environmentally conscious cities in California, having won accolades from GreatNonprofits for supporting green charities and organizations. Yet, city officials are not content to rest in the wake of their successes, and continue to push for emissions reductions and electricity improvements to better the community.