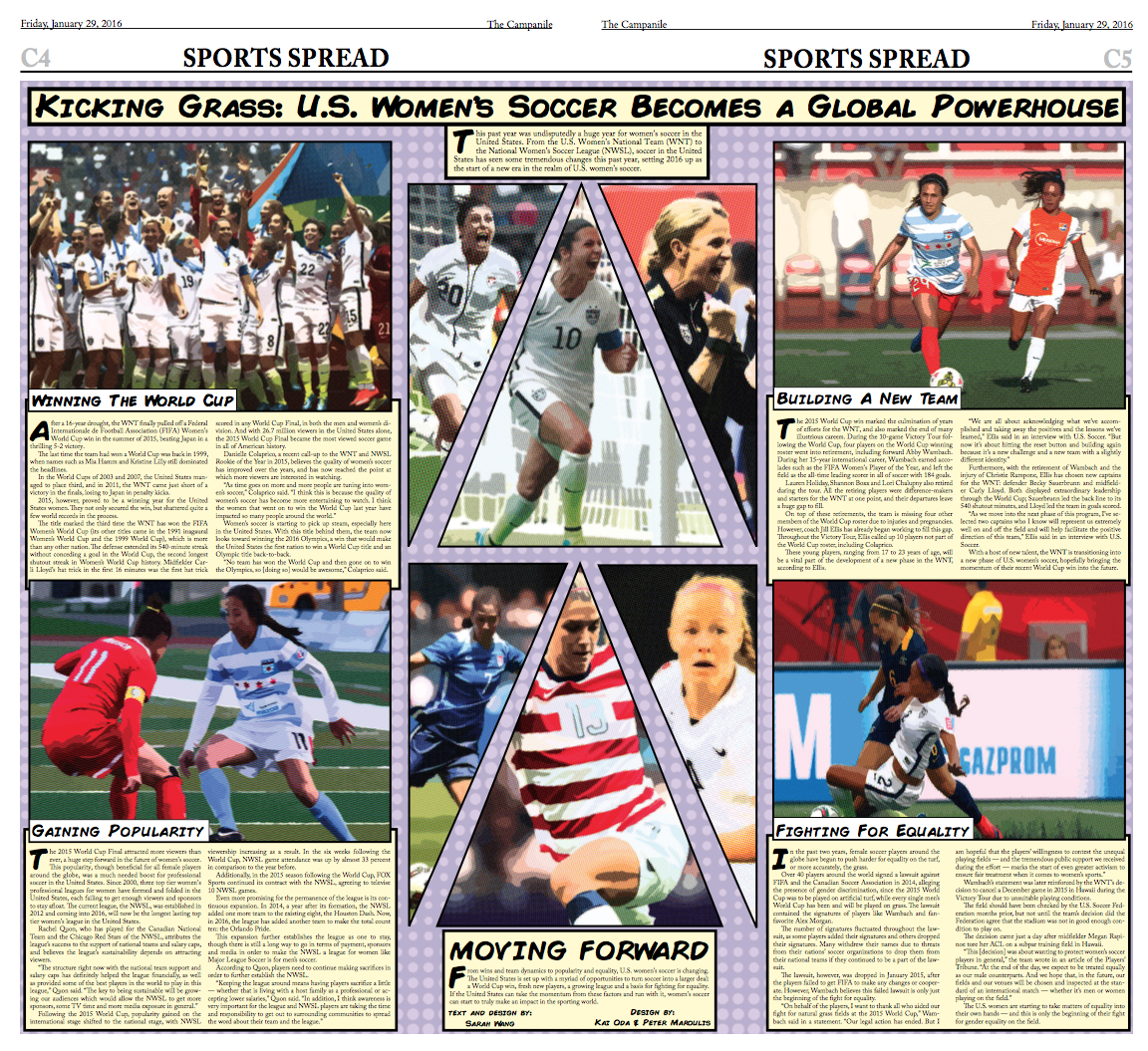 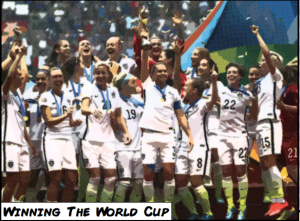 After a 16-year drought, the WNT finally pulled off a Federal Internationale de Football Association (FIFA) Women’s World Cup win in the summer of 2015, beating Japan in a thrilling 5-2 victory.

The last time the team had won a World Cup was back in 1999, when names such as Mia Hamm and Kristine Lilly still dominated the headlines.

In the World Cups of 2003 and 2007, the United States managed to place third, and in 2011, the WNT came just short of a victory in the finals, losing to Japan in penalty kicks.

2015, however, proved to be a winning year for the United States women. They not only secured the win, but shattered quite a few world records in the process.

The title marked the third time the WNT has won the FIFA Women’s World Cup (its other titles came in the 1991 inagaural Women’s World Cup and the 1999 World Cup), which is more than any other nation. The defense extended its 540-minute streak without conceding a goal in the World Cup, the second longest shutout streak in Women’s World Cup history. Midfielder Carli Lloyd’s hat trick in the first 16 minutes was the first hat trick scored in any World Cup Final, in both the men and women’s division. And with 26.7 million viewers in the United States alone, the 2015 World Cup Final became the most viewed soccer game in all of American history.

Danielle Colaprico, a recent call-up to the WNT and NWSL Rookie of the Year in 2015, believes the quality of women’s soccer has improved over the years, and has now reached the point at which more viewers are interested in watching.

“As time goes on more and more people are tuning into women’s soccer,” Colaprico said. “I think this is because the quality of women’s soccer has become more entertaining to watch. I think the women that went on to win the World Cup last year have impacted so many people around the world.”

Women’s soccer is starting to pick up steam, especially here in the United States. With this title behind them, the team now looks toward winning the 2016 Olympics, a win that would make the United States the first nation to win a World Cup title and an Olympic title back-to-back.

“No team has won the World Cup and then gone on to win the Olympics, so [doing so] would be awesome,” Colaprico said. 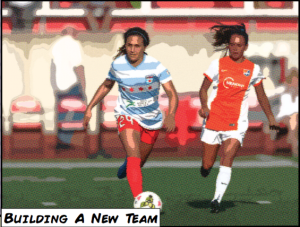 The 2015 World Cup win marked the culmination of years of efforts for the WNT, and also marked the end of many illustrious careers. During the 10-game Victory Tour following the World Cup, four players on the World Cup winning roster went into retirement, including forward Abby Wambach. During her 15-year international career, Wambach earned accolades such as the FIFA Women’s Player of the Year, and left the field as the all-time leading scorer in all of soccer with 184 goals.

Lauren Holiday, Shannon Boxx and Lori Chalupny also retired during the tour. All the retiring players were difference-makers and starters for the WNT at one point, and their departures leave a huge gap to fill.

These young players, ranging from 17 to 23 years of age, will be a vital part of the development of a new phase in the WNT, according to Ellis.

“We are all about acknowledging what we’ve accomplished and taking away the positives and the lessons we’ve learned,” Ellis said in an interview with U.S. Soccer. “But now it’s about hitting the reset button and building again because it’s a new challenge and a new team with a slightly different identity.”

Furthermore, with the retirement of Wambach and the injury of Christie Rampone, Ellis has chosen new captains for the WNT: defender Becky Sauerbrunn and midfielder Carly Lloyd. Both displayed extraordinary leadership through the World Cup; Sauerbrunn led the back line to its 540 shutout minutes, and Lloyd led the team in goals scored.

“As we move into the next phase of this program, I’ve selected two captains who I know will represent us extremely well on and off the field and will help facilitate the positive direction of this team,” Ellis said in an interview with U.S. Soccer.

With a host of new talent, the WNT is transitioning into a new phase of U.S. women’s soccer, hopefully bringing the momentum of their recent World Cup win into the future. 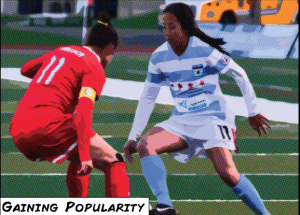 Rachel Quon, who has played for the Canadian National Team and the Chicago Red Stars of the NWSL, attributes the league’s success to the support of national teams and salary caps, and believes the league’s sustainability depends on attracting viewers.

“The structure right now with the national team support and salary caps has definitely helped the league financially, as well as provided some of the best players in the world to play in this league,” Quon said. “The key to being sustainable will be growing our audiences which would allow the NWSL to get more sponsors, some TV time and more media exposure in general.”

Following the 2015 World Cup, popularity gained on the international stage shifted to the national stage, with NWSL viewership increasing as a result. In the six weeks following the World Cup, NWSL game attendance was up by almost 33 percent in comparison to the year before.

Additionally, in the 2015 season following the World Cup, FOX Sports continued its contract with the NWSL, agreeing to televise 10 NWSL games.

Even more promising for the permanence of the league is its continuous expansion. In 2014, a year after its formation, the NWSL added one more team to the existing eight, the Houston Dash. Now, in 2016, the league has added another team to make the total count ten: the Orlando Pride.

This expansion further establishes the league as one to stay, though there is still a long way to go in terms of payment, sponsors and media in order to make the NWSL a league for women like Major League Soccer is for men’s soccer.

According to Quon, players need to continue making sacrifices in order to further establish the NWSL.

“Keeping the league around means having players sacrifice a little — whether that is living with a host family as a professional or accepting lower salaries,” Quon said. “In addition, I think awareness is very important for the league and NWSL players are taking the time and responsibility to get out to surrounding communities to spread the word about their team and the league.” 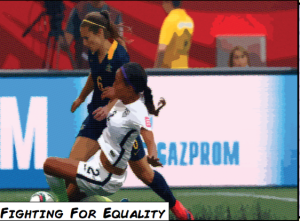 In the past two years, female soccer players around the globe have begun to push harder for equality on the turf, or more accurately, the grass.

Over 40 players around the world signed a lawsuit against FIFA and the Canadian Soccer Association in 2014, alleging the presence of gender discrimination, since the 2015 World Cup was to be played on artificial turf, while every single men’s World Cup has been and will be played on grass. The lawsuit contained the signatures of players like Wambach and fan-favorite Alex Morgan.

The lawsuit, however, was dropped in January 2015, after the players failed to get FIFA to make any changes or cooperate. However, Wambach believes this failed lawsuit is only just the beginning of the fight for equality.

“On behalf of the players, I want to thank all who aided our fight for natural grass fields at the 2015 World Cup,” Wambach said in a statement. “Our legal action has ended. But I am hopeful that the players’ willingness to contest the unequal playing fields — and the tremendous public support we received during the effort — marks the start of even greater activism to ensure fair treatment when it comes to women’s sports.”

Wambach’s statement was later reinforced by the WNT’s decision to cancel a December game in 2015 in Hawaii during the Victory Tour due to unsuitable playing conditions.

The field should have been checked by the U.S. Soccer Federation months prior, but not until the team’s decision did the Federation agree that the stadium was not in good enough condition to play on.

The decision came just a day after midfielder Megan Rapinoe tore her ACL on a subpar training field in Hawaii.

“This [decision] was about wanting to protect women’s soccer players in general,” the team wrote in an article of the Players’ Tribune. “At the end of the day, we expect to be treated equally as our male counterparts. And we hope that, in the future, our fields and our venues will be chosen and inspected at the standard of an international match — whether it’s men or women playing on the field.”

The U.S. women are starting to take matters of equality into their own hands — and this is only the beginning of their fight for gender equality on the field.

From wins and team dynamics to popularity and equality, U.S. women’s soccer is changing. The United States is set up with a myriad of opportunities to turn soccer into a larger deal: a World Cup win, fresh new players, a growing league and a basis for fighting for equality. If the United States can take the momentum from these factors and run with it, women’s soccer can start to truly make an impact in the sporting world.