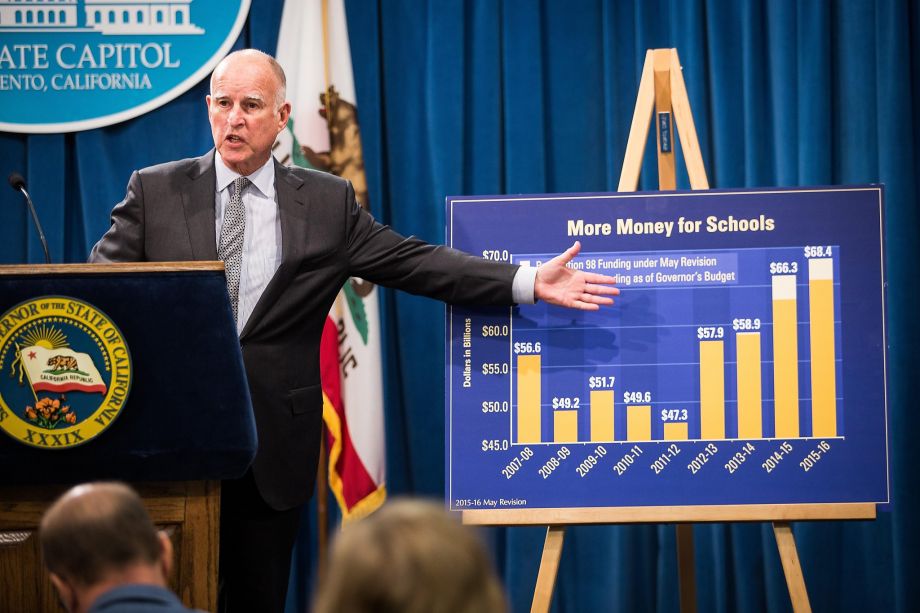 Gov. Jerry Brown discusses his proposed budget plan for 2016-17 at a press conference on Jan. 7 in Sacramento. His $122.6 billion plan would be the largest in California history. Courtesy of SF Chronicle

Focusing on fiscal restraint, Brown would distribute his budget on education, healthcare and state infrastructure, while also strengthening the state’s flood prevention program, the Rainy Day Fund, and gradually paying off its debts.

Along with the budget, Brown introduced a tax on health insurance users to replace the old tax, which will expire in June. The new tax is expected to produce $1.35 billion annually.

The proposal requires the support of at least two-thirds of California lawmakers; Brown anticipates the backing of Republican lawmakers will be difficult, yet crucial to the budget plan and tax.

Since its introduction, the tax proposal has received criticism from Republicans, with many finding the proposals excessive and unnecessary.

Brown says that with the new tax, there would be numerous benefits, including a 10 percent increase in spending for developmentally disabled Californians.

However, advocates of the developmentally disabled disagree with Brown, with a similar arguement to the Grand Old Party, saying the budget “does almost nothing to stabilize the crumbling services system that 300,000 people with developmental disabilities rely on.”

They also said that if efforts to pass the tax fails, the results would be detrimental to the assistance of disabled California residents.

Many parents and educators, including Elena Shea, president of the Sixth District Parent and Teacher Association, which includes Santa Clara, Santa Cruz and Monterey counties, approve of the proposal.

“I think people have forgotten how deeply education was cut not too many years ago, so it’s nice to get that money back, and hopefully it can go up from there,” Shea said.

The plan will be dedicated towards increasing and expanding transportation by repairing and preserving damaged highways and roads .

These expenses would be funded a by a $65 annual fee for drivers, an 11-cent diesel tax and a 6-cent gas increase as well as $500 million annually from California’s greenhouse gas cap-and-trade system.

Senator Jim Beall, who also leads the Transportation Committee, is pleased with Brown’s efforts, saying he is glad that Brown “has put the issue on the table” but it is “probably going to take a different twist from what the governor is proposing.”

Many Californians are anxiously anticipating the results of the proposed budget and tax, which has a deadline of Jan. 29.