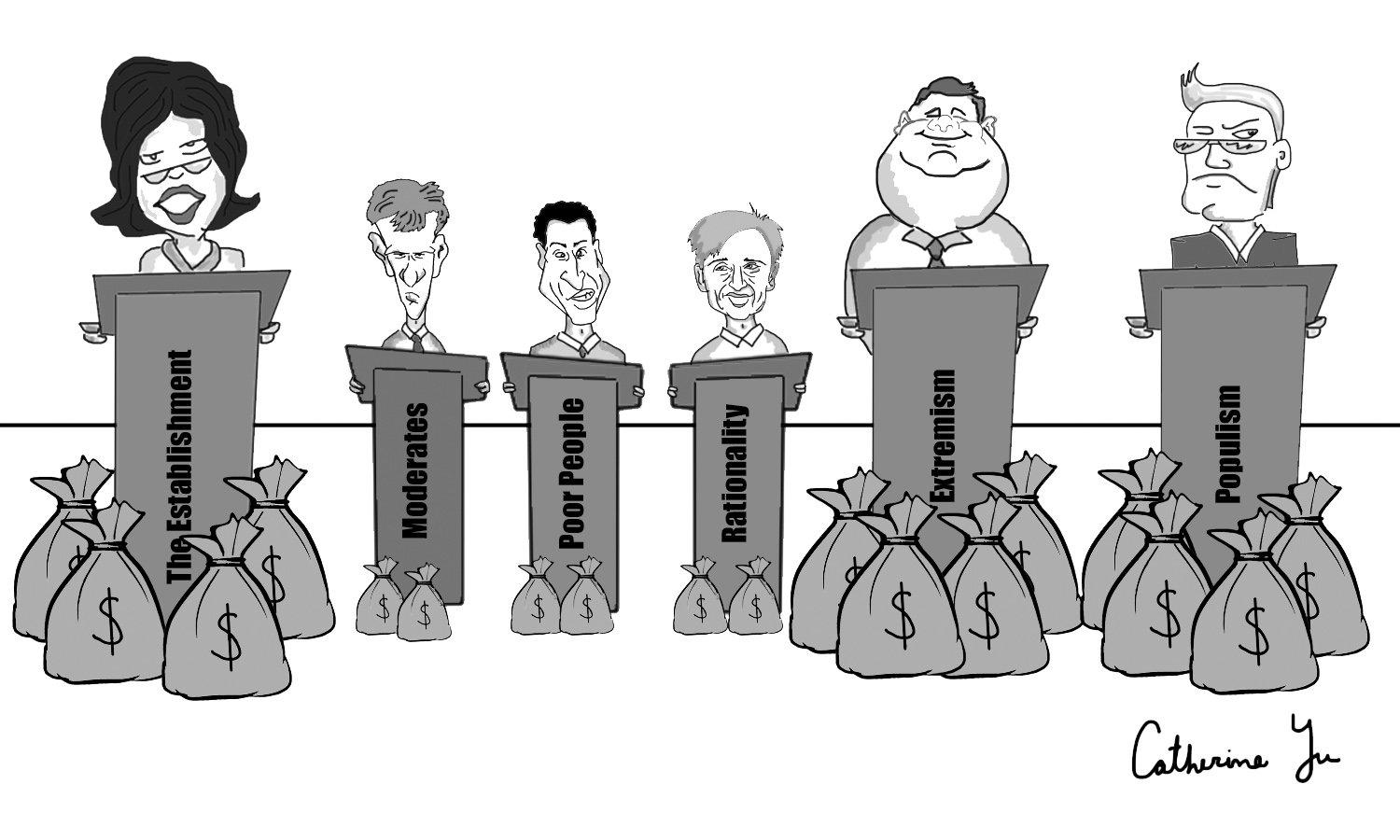 In the past four years since the Citizens United case, the media and the public have carefully analyzed and studied the effects big money, donations to a candidate over $200, have had on politics. However, the effects of small money, donations to a candidate under $200, have garnered little focus. Small money has had a similar importance to big money and to combat the influence of both big money and small money on politics, a system that removes the undemocratic influences of money on politics should be implemented.

Most of the arguments about whether big money should be allowed in the political system are based on one simple principal: big money creates corruption. This assumption is unsupported by the fact that most interest groups and large individuals donate to candidates and parties that share ideologies similar to their own. If interest groups and large individual donors were just donating to gain more influence, then logically they would donate to either party in order to gain more power. In addition, if big money truly corrupted politicians, then politicians would attempt to solicit donations from any group regardless of ideological considerations.

“Interest groups have preferences as to which party controls a majority of seats in Congress, which leads them to direct ‘sincere’ and electorally useful money to this party (i.e., labor groups prefer Democrats, corporate groups prefer Republicans),” Thomas Brunell , a professor of political science at the University of Texas at Dallas, wrote. “When interest groups donate funds to the other party, the donations are designed to have as minimal electoral impact as possible.”

The alliance between big money and the establishment wing, or the dominant group within a political party, is well documented. So far in the 2016 presidential race, large individual contributors have provided over 75 percent of the funds for all three major establishment candidates, Jeb Bush, Hillary Clinton and Marco Rubio.

This influx of money from big donors to establishment candidates provides them with a larger amount of money to spend on their campaigns than other candidates.

As practically the only other source of funding for candidates other than big money, small money may seem attractive to some people. Bernie Sanders, sees big money as corrupting politics, believes small money has many of the same negative effects on politics that big money does.

While extremists, populists and establishmentarians are overrepresented, the people that do not donate  — such as moderates and those in poverty — are not equally represented. Since moderates and poor people either generally do not feel strong political efficacy, or do not have enough money to donate, they do not donate. Therefore, they do not have as much political power as they should in a democratic society which should hold the ideal that all people should have equal power in politics.

For all people to be equal in the political realm, all people must have the same amount of political power, and this is currently not the case. Since moderates and poor people are marginalized by the donation system, they are politically unequal. This inequality is dangerous to the democratic political system.

Some people, namely the Supreme Court, may say that money should be allowed in politics because it is a form of speech. This may be true, but it is inherently a bad form of speech. Since money in the political sphere disadvantages moderates and the poor, this political inequality is against the very nature of democracy.

The concept of limiting free speech may seem outlandish and dangerous to some, but it is an established precedent that free speech which infringes on the rights of others should be banned. This reason for banning speech applies to campaign funding because the current method of campaign funding gives less political power to those who do not donate, and therefore infringes on their right to representation.

The only logical way to solve the issues of campaign finance is to create a system in which all candidates are equally financed and the money for campaigns comes from the government, so that everyone’s interests are equally represented.