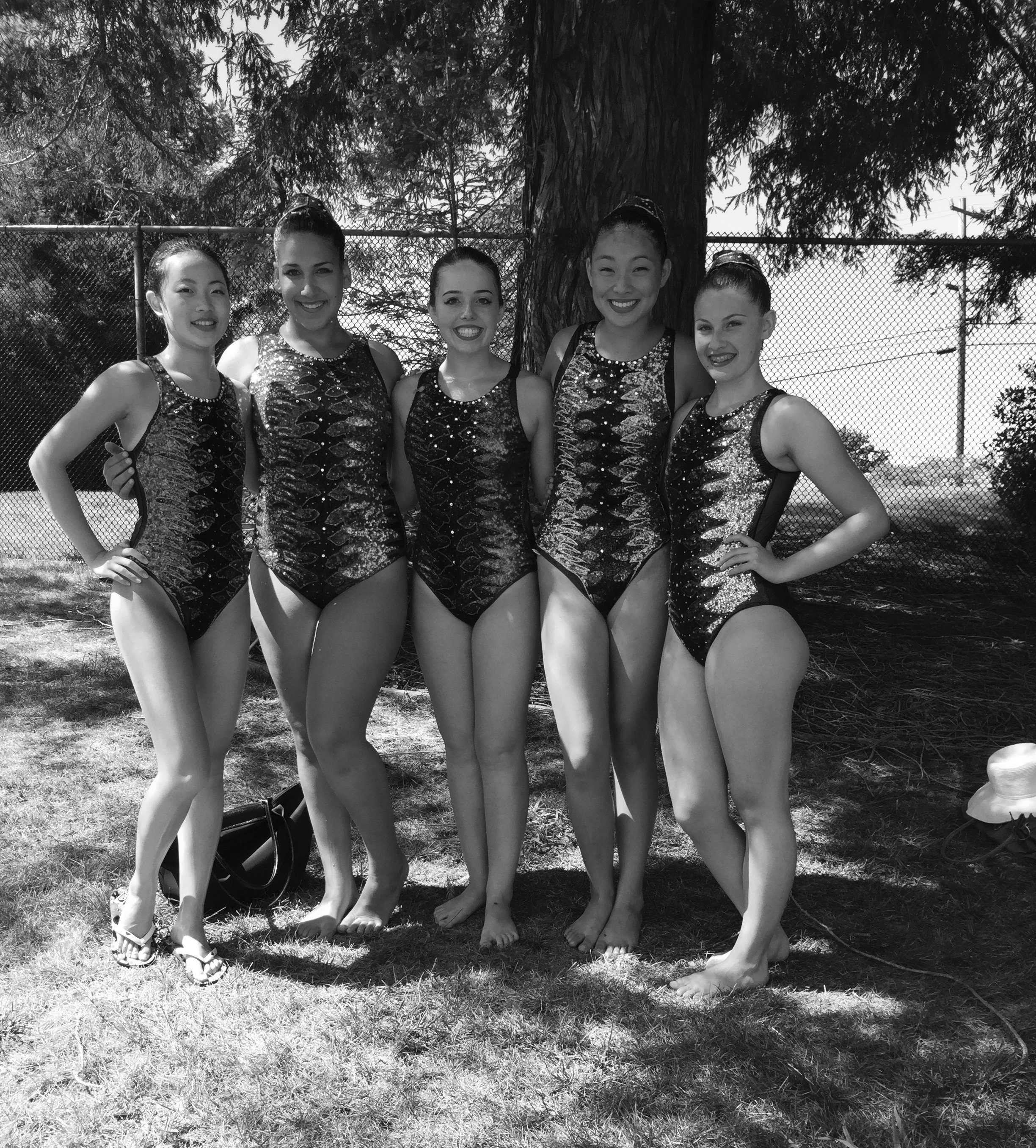 Yasuda stands with her team after having performed at the Intermediate Invitational.

A mix between swimming, gymnastics and dance, synchronized swimming demands both strength and grace. Maki Yasuda, a junior at Palo Alto High School, dedicated herself to synchronized swimming for five years before becoming a coach in her sophomore year for girls with similar aspirations as her.

“When I was little, I explored many sports that I didn’t really stick to,” Yasuda said. “Synchronized swimming to me is a really beautiful sport that takes a lot of teamwork and dedication. It’s the most fun sport I’ve ever done.”

Yasuda started off her synchronized swimming career well, winning most improved in swimming when she was in sixth grade. In addition, she won highest-scoring swimmer in various competitions during her first, third, fourth and fifth years. She also won the Triple Crown and Grand Slam during her fourth year.

Her duet team took first place at the Intermediate Invitational in Sacramento during her first, third and fourth years.

“I enjoy it because it’s a team sport, and I love my friends from [synchronized swimming], and it’s a nice way to forget about the stress from school and just have fun,” Yasuda said.

As an athlete with, it was not always easy for Yasuda to balance her numerous practices with studying and personal time. Although she did not experience any huge setbacks, she experienced several struggles along the way.

“When I was on [the competitive team] it did get overwhelming, and sometimes I didn’t want to go to practice but by the end of each practice, I always had a good time,” Yasuda said.

During her first year, Yasuda practiced for up to 19 hours each week, and during her second year, up to 23 hours each week. Her last three years were less competitive; however, synchronized swimming became a huge time commitment and eventually, she decided to stop competing.

Although her busy schedule did not allow Yasuda to maintain her huge commitment to synchronized swimming, Yasuda found a good balance when she discovered a coaching opportunity.

“I’ve been coaching for almost two years now, and when I quit, I decided to keep coaching since I didn’t want to give up the sport completely,” Yasuda said.

This is her second year coaching girls between the ages of 7 and 10 at Belle Haven in Menlo Park twice a week.

“I love coaching so much because they [the kids Yasuda coaches] absolutely love synchro,” Yasuda said. “You can see their determination and passion for the sport [and] it makes me happy to see them grow and to be able to say I helped them.”

Synchronized swimming has ultimately left a lasting impact on her life.

“The coaches were extremely strict about working hard, attendance and being on time and I think that affected me growing up to work hard in everything I do,” Yasuda said.