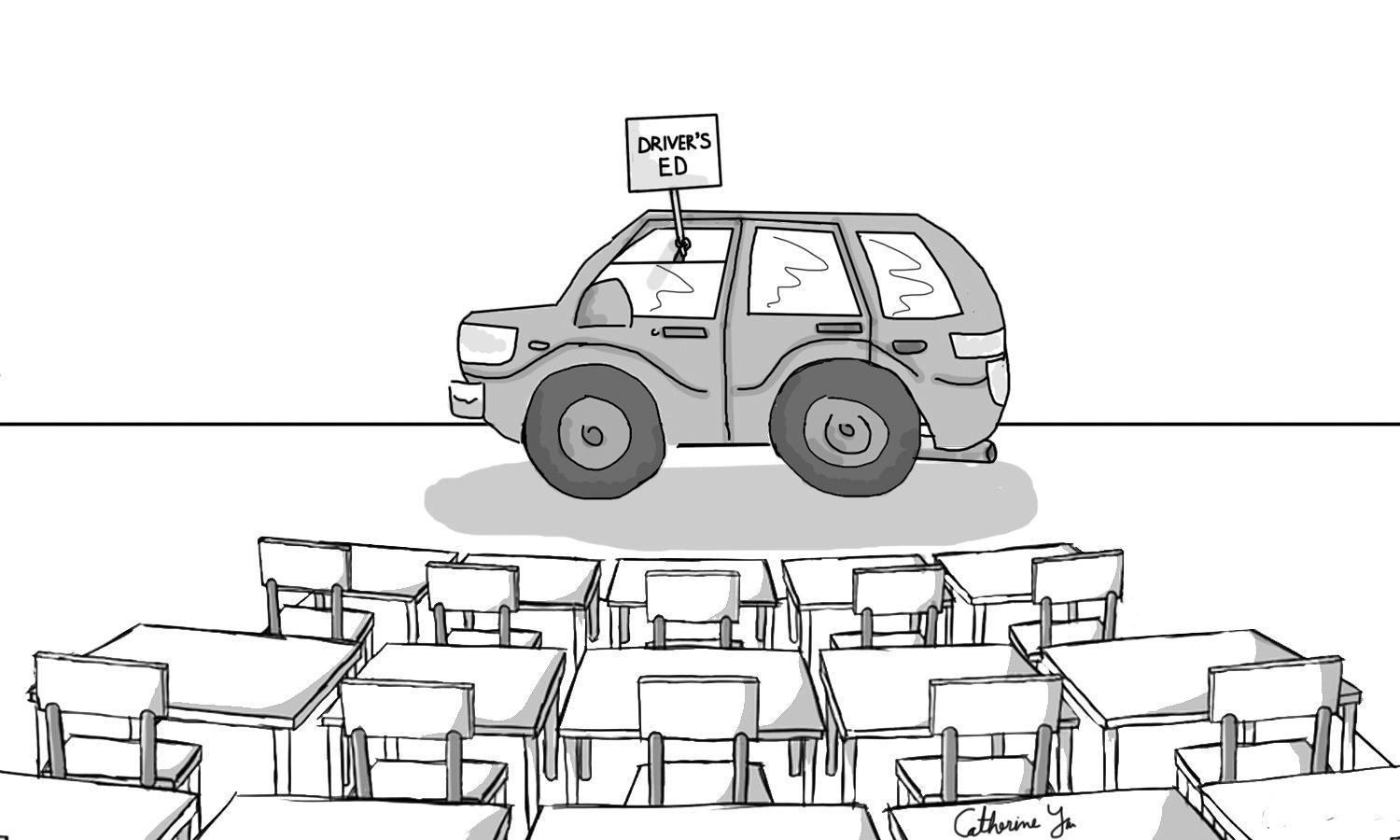 One of the highlights of becoming a teenager is getting a driver’s license. For many students, however, driving has become more than simply a perk of turning 16; taking the wheel is now a basic skill needed for everyday life. Palo Alto High School should offer driver’s education that takes place in a classroom setting, as it is an essential and necessary ability that every student should have the chance to acquire before graduating high school. Not offering driver’s ed as a course at Paly forces students to spend hundreds of dollars on driving lessons and online courses by themselves for a skill that has become almost obligatory for students to have.

Paly stopped offering driver’s ed two years ago, due to disagreements on how the class was being taught. Since then, students have had to pay for driver’s education online. Most websites charge 50 dollars for written and driving lessons. This is all in addition to the 33 dollars fee for taking the written test in California.

The cost of getting a license is not inexpensive. Online courses cost approximately $50 and state-mandated in-car driving courses to obtain a license can cost upwards of $500. Junior Lauren Jozefov is in the process of practicing for her driver’s test.

“We shouldn’t have to pay for [driving lessons] because [they are] a necessary class I know other schools offer it and that we used to,” Jozefov said.

Many students want the independence that takes place along with driving in addition to the responsibility of having a license. Both students and parents benefit from students learning to drive in high school. Sophomore Peter King is a newly licensed driver.

“I need to drive because my parents won’t always be there to give me a ride and I want to be there for myself,” King said.

Many students see driving more as a necessity than the privilege that it used to be. Since driver’s ed is not a course offered at Paly, students must resort to take class outside of school which is both time-consuming and expensive. This only adds more pressure to the already stressful life of the average Paly student.

If driver’s education was offered at Paly, it would take the workload and pressure of another class outside of school off of students.
Many students find that the most difficult part of learning to drive is studying for the permit test outside of school.

“The most tedious thing about getting a license is the online work and studying for tests there are so many odd rules to memorize,” King said.

In addition to the costs of written and driving lessons, many students also tend to learn better in a classroom setting rather than at home in front of a computer.

If Paly was able to give students the opportunity to take driver’s ed while making it an interesting and engaging class, students would retain the information better than doing a class online.
Sophomore Clare Thomas relates to the confusing and difficult struggles of taking driver’s education online as opposed to taking it in a classroom setting.

“I think Paly should offer driver’s [ed] because the process can be very confusing and if we could do driver’s [ed] at school it would be easier and much less discouraging,” Thomas said.

When Paly did offer driver’s ed two years ago, it took place before the regular 8:15 a.m. school start and covered all of what students needed to know to pass their permit test. With a driver’s ed class offered at Paly, students would have the opportunity to work with a teacher who they could gain the support they needed from without being discouraged. And be able to ask a teacher questions before taking their driver’s test. Due to a lack of funding, Paly stopped in-car driving lessons.

“I think Paly should offer driver’s ed so that students can have one-on-one behind the wheel time in a state institution that has to maintain standards,” King said.

Students at Paly face enough pressure from the individual class work on their own. Having driver’s ed not offered as a course at Paly forces students to spend both extra money and time on an outside class for no extra course credit or additional support.

Furthermore, online courses generally don’t assure that they will teach the material to the test or teach the material thoroughly enough for all of the students to retain. If students were given the opportunity to take driver’s ed in a classroom setting at Paly with teacher support and a set curriculum, they would receive a more comprehensive and through ed on driving, as well as less school stress.