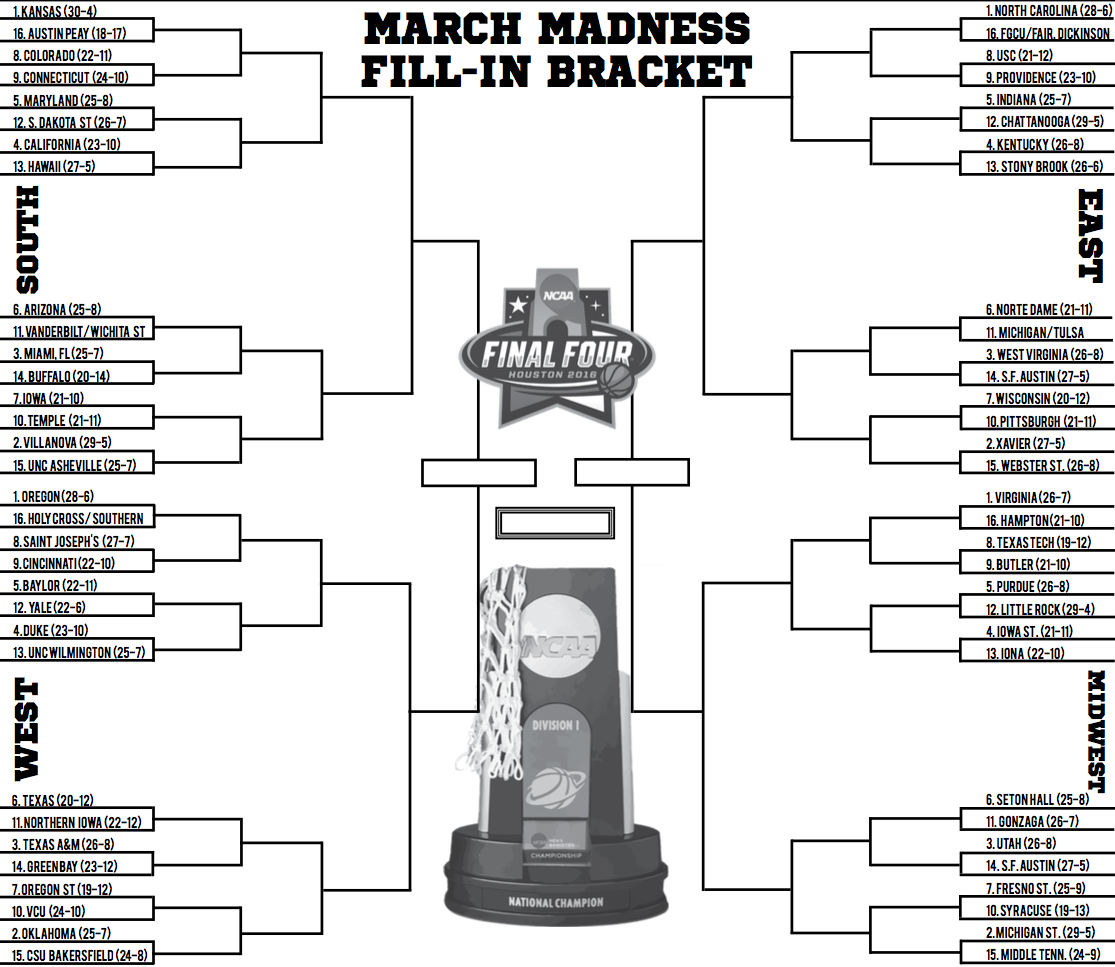 Starting on March 17, 68 college basketball teams across the nation will compete in the 2016 National Collegiate Athletic Association (NCAA) March Madness tournament. While most of the games will play out with the favored teams winning, watch out for sleepers to pull off a few upsets. Dreams will be made, hopes will be shattered, brackets will be busted and one team will take home the title of national champion. To achieve ultimate bragging rights, fill out your March Madness predictions in this bracket.

With a 30-4 record, 14-game win streak and their 10th Big 12 win, Kansas is poised to dominate the South Region. Senior Perry Ellis, the starting power forward, is one of the team’s strongest players: Ellis leads his team in points per game at 16.5. His skill, combined with junior guard Frank Mason III’s superb shooting and lockdown defense, has bolstered the Jayhawks’ game since November. Kansas is the number one team in the nation for a reason—expect them to play in the Final Four at the very least. The Jayhawks’ biggest competition in their region is two seed Villanova. The Wildcats are a solid team both offensively and defensively, so it will take an exceptional team to beat them. Dissimilar to Kansas, Villanova does not rely on a couple of exceptional athletes to put points on the board. Its top five players, Josh Hart, Kris Jenkins, Ryan Arcidiacono, Jalen Brunson and Daniel Ochefu, each average roughly 12 points per game. Additionally, Villanova does not bank on treys to win games; most of their points come from inside shots. A potential challenger to Villanova is California. The Golden Bears have had a decent season, winning 23 games. They are led by freshman forwards Ivan Rabb and Jalen Brown. At 6’11”, Rabb averages 8.5 rebounds per game and hits over 60 percent of his field goals. Brown is a top scorer for the Bears, sinking an average of 15 points per game.

Arguably the best college basketball player of the 2015-16 season, senior guard Buddy Hield is more than capable of leading the Sooners past the teams in the West Region. Hield is the second-highest scorer out of all eligible players in the NCAA, averaging 25 points per game, and shoots 46.4 percent from behind the three point line. Similarly, the Sooners are a jump-shooting team, generally scoring around 10 treys per game at 42.6 percent. While their reliance on their NBA-level guard is risky, it should pay off: few players can guard against Hield’s fine-tuned ability to shoot accurately and drive aggressively. Despite its lack of any outstanding players, Oregon tops the West Region over Oklahoma. That’s not to say the Ducks do not deserve the one seed; the team has talent, but it is more or less evenly spread between its starting five. Forwards Dillon Brooks and Elgin Cook average 16.8 and 14.5 points per game, respectively, and guard Tyler Dorsey hits 43.1 percent of his treys. Favored behind Oklahoma is Duke, the defending national champion. The Blue Devils are ranked fourth in the West Region, a far cry from their one seed in the South bracket during the 2014-15 season. With their 23-10 record, this year’s team has proven to be weaker than last year’s, which lost only four games. Despite its 11 seeding, Northern Iowa could pose a threat to the top seeded West teams. In November, the Panthers beat overall two seed UNC, meaning they have the skill to pull off a Cinderella run.

Seeded second overall behind Kansas, North Carolina should at least make it to the Final Four. The Tar Heels are a well-rounded, extremely talented team with a deep bench should their starters falter. They average 82.4 points per game, meaning it will take a strong defensive team to counter Carolina’s offense. Senior forward Brice Johnson leads the team in scoring, making 16.6 points per game and shooting 61.4 percent from inside the arc. The team’s biggest weakness is their poor 3-point shooting, as they make only 31.4 percent of their attempted treys. Despite Indiana’s fifth seeding in the East Region, (which looks to be the most difficult region in this year’s tournament), the Hoosiers are expected to advance far in the 2015-16 bracket and pose a legitimate threat to North Carolina. Averaging 17 points and 5.5 assists per game, senior Hoosier guard Yogi Ferrell could very plausibly lead his team to the Sweet Sixteen at the very least. Indiana is a high-scoring team, as they average 82.3 points per game, which makes them a threat to any team in the East. Another team with the potential to make a run through the East is Stony Brook.  Senior forward Jameel Warney leads his team with 19.8 points per game and 10.7 rebounds.  Warney is one of the this season’s greatest college basketball players, and with him, the Seawolves have a very realistic chance of upsetting their region.

One of the strongest contenders for the national title is Michigan State, the Midwest Region two seed. Michigan State has strong shooting from the outside – the Spartans have the highest 3-point percentage (43.1 percent) out of all of the NCAA Division I teams. Michigan State’s top scorer, senior guard Denzel Valentine, averages 19.6 points per game and shoots 45.4 percent from behind the arc. Valentine performs well under pressure, as demonstrated by the fact that he scored 29 points, 12 rebounds and 12 assists in Michigan State’s narrow win against Kansas in December. However, Michigan State’s heavy reliance on Valentine is risky; should he be injured during the tournament or have an off game, the Spartans’ chances at the title will be severely crippled. Similarly, the odds of Midwest one seed Virginia not making it to at least the elite eight are slim. While known for their defense, the Cavaliers’ offense is steeply on the rise. Virginia makes 40.5 percent of their treys and 51.9 percent of their field goals. Senior guard Malcolm Brogdon scores 18.7 points per game, the most of his teammates by a wide margin. While not ranked as high as Michigan State and Virginia, sleeper  team Gonzaga has the potential to pull off a run. The Bulldogs’ strategy is to rely heavily on their forwards to win games. This tactic could very plausibly pay off: 6’10” senior forward Kyle Wiltjer averages 20.7 points per game. Wiltjer is helped by sophomore forward Domantas Sabonis, who snags 11.6 rebounds per game.