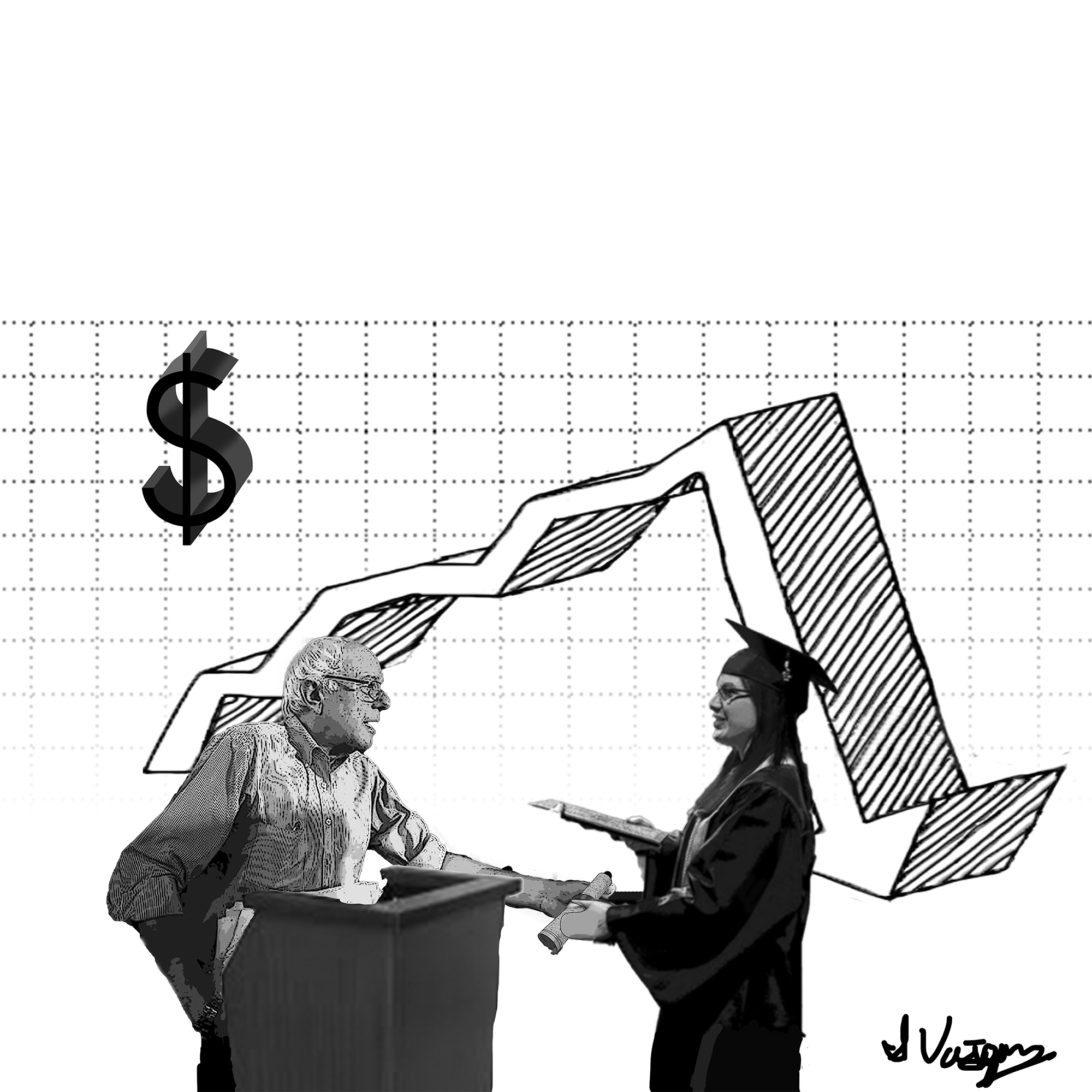 Over the past several months leading up to November’s presidential election, millions of millennials have been “feeling the Bern.” It seems as though the elderly self-proclaimed Democratic Socialist has captured America’s youngest voting demographic.

Bernie has attracted 84 percent of voters under the age of 30 in the Iowa Caucus, the nation’s first primary, according to Time magazine and continued to pull the large majority of the youth vote. But what do young Americans find so appealing about Bernie Sanders? Among several other radically optimistic proposals, the Vermont senator is making a big promise: making college free.

To the estimated 20.2 million college students in America, this promise is a blessing. Young Americans are frustrated at having to shell out tens of thousands of dollars every year, only to graduate with enormous student loans and limited job opportunities.

But if you think free college will solve all our problems, think again.

Free college simply isn’t free. According to the Sanders campaign, his proposed plan requires $70 billion in subsidies to public universities to compensate for the lack of tuition funding. To secure funding for this initiative, Sanders has proposed what economists refer to as a “Robin Hood tax.” Sanders plans to levy a 0.5 percent tax on stock and bond transactions, as retaliation for Wall Street’s involvement in the 2008 financial crisis.

Even with the so-called “Robin Hood tax,” the allocation for tuition would equate to nearly double the amount the government spends on Pell grants –– need-based federal scholarships –– annually. This does not account for potential increases in college enrollment, as less motivated students would be more likely to enroll with such low risk.

Additionally, government subsidies can easily lead to deterioration of the education system and general inflation. For example, California already faces a teacher shortage and exceeding enrollment — finding and paying for the increase in teachers needed would present a large problem. Should teachers be paid less to manage the budget, the quality of teaching would be severely diminished. Students simply cannot expect a high quality of education at little to no cost. Since the government will be paying tuition for the college, the college or university may have to raise auxiliary costs simultaneously to compensate for the lack of tuition revenue, which would lead to the skyrocketing prices of necessities, such as room, board and textbooks. Only the lowest income students will have these additional costs provided for them, free of charge.

Many supporters love Sanders’ proposal because it benefits their own college education directly, but others lend support because they believe they would be paying into a system that lifts motivated students out of poverty. This is false. The proposal actually will benefit middle and upper class students, who already have sufficient savings to pay for college. According to the Pell Institue, 81 percent of students who graduated college in 2012 came from households with incomes above the national average. Similarly, that means that $56 billion of the funds will pay for college for those who have the means to pay for it.

Additionally, Sanders’ admirable intention is to help the poorest students, he should institute a bottom-up policy by intervening and aiding with the college process earlier, starting with the application and standardized test-taking processes. College tuition is truly the final step in the college process and many disadvantaged students do not even make it to that milestone. Instead, he should aim to divert funding to help students with financial hardships apply to college.

Problems persist even years after graduating. The “Robin Hood tax” relies on middle-aged Americans. By placing a tax on trading, Sanders deters average Americans from investing. But by deterring investors, there will be less trades to tax and many economic experts suspect that the tax will raise nowhere near the estimated $70 billion funding that Sanders proposes. According to experts, with less trading, other taxes, such as federal income taxes, will also decrease, leading to a net loss in government revenue. Additionally, experts believe that Sanders’ proposed “Robin Hood tax” would not impact his target: Wall Street speculators. Instead, according to economist Tim Worstall, the markets that would be affected most heavily, such as foreign trade, are not the same ones that contributed to the 2008 recession, such as the housing market.

If there’s no such thing as a free lunch, there’s certainly not a free college education.

Students should invest in their college education, as it will increase their responsibility and motivation to see their degrees to completion. Even though some students may have their college tuition paid for by parents, they still are held accountable to a specific individual.

There is less accountability for money coming from a broader institution with fewer measures of retribution that the government can enact should the student not take his or her education seriously. Not only will the student hurt his or her own academics, he or she will also be failing the government, who will have invested heavily to subsidize each student’s tuition.

Nothing gets American hearts racing like the word “free.” But as Sanders will learn, nothing is free. If there’s no such thing as a free lunch, there’s certainly not a free college education.