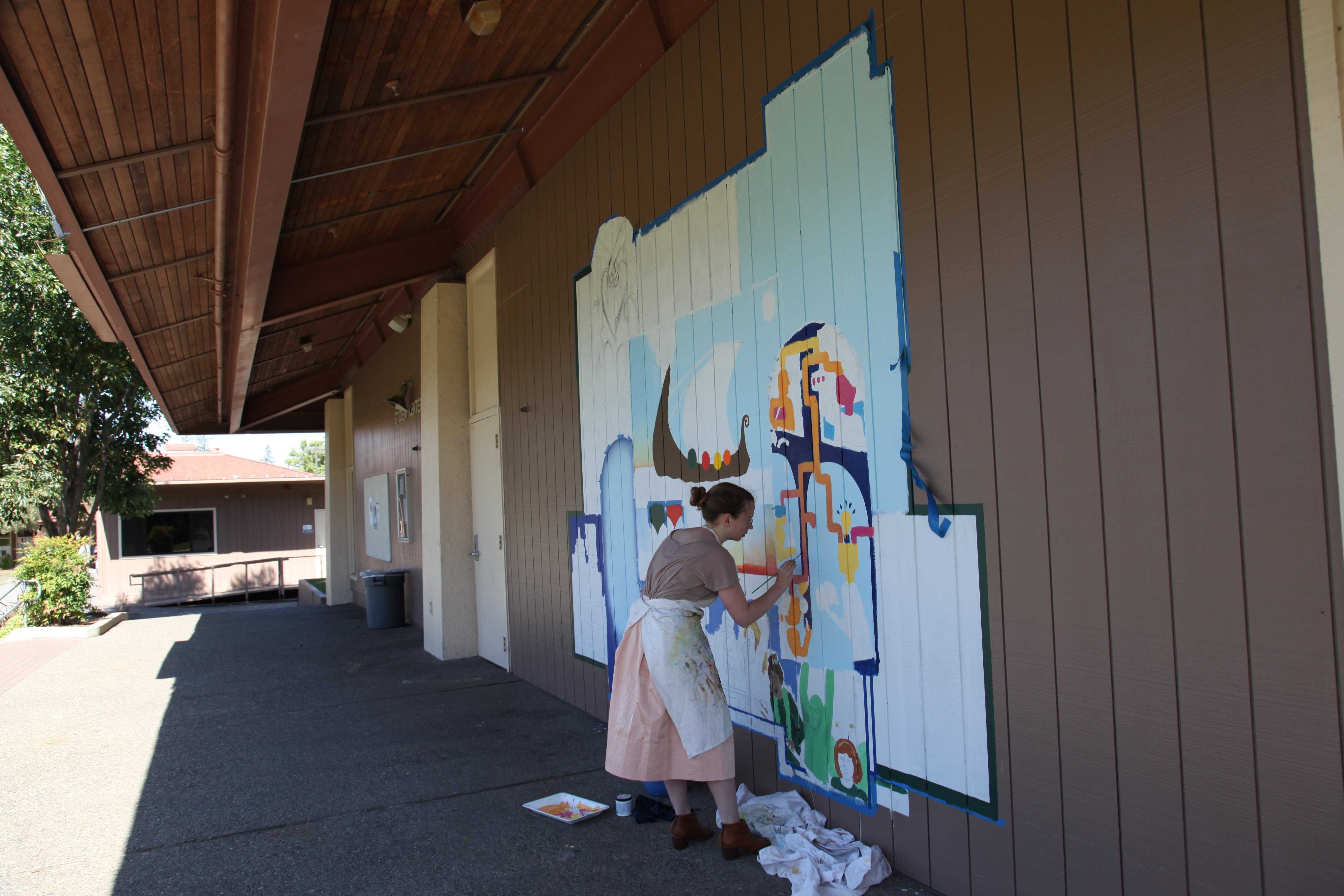 Senior Karen Bowman paints the mural on Student Center to be finished next year.

Palo Alto High School students have started the painting  of a new mural on the wall of the Student Center, where administration recently removed a mural painted by James Franco.

The project is being overseen by Art Teacher Kate McKenzie and worked on by students in McKenzie’s Advanced Painting and Drawing class.

The mural will consist of nine main panels, illustrating different themes of student life at Paly. These themes will range from “we learn” to “we struggle,” and a final panel will be included for the names of the artists.

Senior Karen Bowman designed the “we learn” panel and has begun the painting process with the help of fellow students.

“I drafted five or six different ideas that were completely different, and then I had Ms. McKenzie look at them and we picked one,” Bowman said. “Then, I made a bigger, more detailed draft of it and modified it. I drew it again at full size and then  someone else drew it onto the wall on the Student Center.”

According to Bowman, the inspiration for the design came from Paly students sharing ideas while learning.

“I wanted to show how, at Paly, people learn by spreading ideas [and] talking to each other,” Bowman said.

According to McKenzie, a major reason for the creation of the new mural is to address the negativity Paly has experienced within the last year, primarily related to student suicides.

“People really wanted art on campus to reflect, I think, how loving and how positive we are as well,” McKenzie said. “And that we do care about our people, and we want people to know we care about them.”

The art department’s goal to add art to all students’ lives helped to inspire the mural as well.

“The art department was developing its long-term goals because we were getting our [Western Association of Schools and Colleges] accreditation,” McKenzie said. “And our goals were to continue to provide art experiences for people, you know, to enrich their lives. So we developed a theme of art every day for all students. And to have that, we have to have art out in our public spaces.”

“Truthfully, Franco really reminded us that it was time to get some of our own art up, and art that reflected our life,” McKenzie said.

Students will continue working on the mural and hope to finish next school year, though there are no official deadlines in place.

The mural project received $350 from the Associated Student Body to cover supplies. Funding also came from administration and from Youth Speaks Out.

In addition to the mural, McKenzie hopes to continue adding art around the campus, with more murals and paintings.

“By next fall, we’ll definitely have quite a bit of art on campus,” McKenzie said. “And I’d love to continue that.”