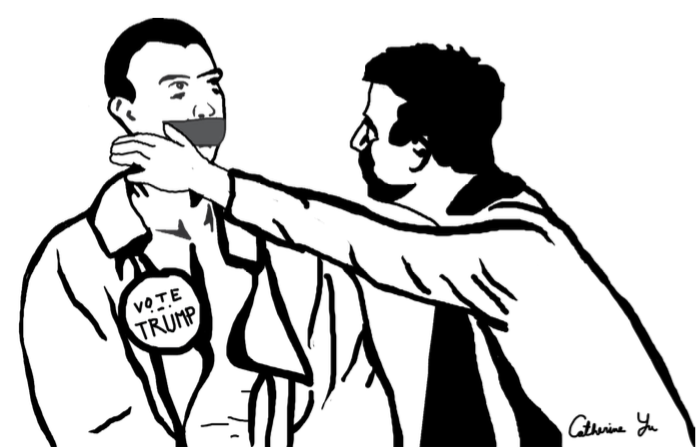 In recent months, anti-Donald Trump protesters have crowded the streets, wreaking havoc at Trump rallies in Chicago, Costa Mesa, Calif. and most recently in the Bay Area’s own Burlingame, Calif.  Anti-Trump agitators will do anything they can to prohibit the First Amendment right to free speech for Trump and his supporters.

Whether one agrees with what Trump says or not, he and his supporters have the constitutional right to assemble and voice their opinions.

Hundreds of chaotic protesters gathered outside the Trump rally in Costa Mesa on April 28, blocking the streets. Protesters smashed a police car window, stomped on the roof of a cruiser and vigorously shook a police car in an attempt to flip the vehicle.  Groups of protesters threw debris at the cars of Trump supporters as they drove away from the rally. Protesters also stole benches from a nearby hotel to block the entrance onto Highway 55 –– throwing rocks and beer bottles at frustrated drivers. Most of the anti-Trump violence was captured on camera and uploaded to YouTube by witnesses.

In Burlingame, Trump protesters knocked barriers that separated them from the Hyatt hotel where Trump was speaking at the state Republican convention to the ground. Rocks, eggs, bottles and even apples were thrown at police, according to the Los Angeles Times.

A San Mateo County sheriff arresting one protester was kicked in the face by another protester. Trump supporter Adam Harry said that his phone was grabbed out of his hands and thrown across a parking lot into a bush. He was spat on and shoved as he walked away from protesters.

The Hyatt hotel locked its doors from the inside to prevent protesters from coming inside and causing turmoil for the guests and those attending the Republican convention. If the anti-Trump agitators had successfully infiltrated the convention, it would have only caused harm.

Since people attending the convention and watching the news saw the protesters, being present was enough to make their point. Based off the actions of previous Trump protestors, Trump supporters would only invoke violence if they went inside and disrupted the peace at the GOP.

The tactics Trump protesters use are infantile and ill-natured. Wherever Trump travels, protesters cause turmoil and disorder with explicit chants like “f**k Donald Trump.”

Some of the same supposedly liberal individuals calling for safe zones and trigger warnings are attending these protests. By their logic, teaching rape law at Harvard University is too inappropriate because it causes discomfort for some students, but shouting “f**k Donald Trump” at every protest is acceptable.

If these protesters are against invoking stress or discomfort in other individuals, they should realize that chanting expletives directed at another person and that person’s beliefs may cause discomfort for Trump supporters.

Trump protesters have prevented anyone interested in hearing his points from entering rallies in cities all around America. The protesters go so far as to block highways, vandalize property and viciously target pro-Trump individuals.

Whether or not one agrees with what Trump says, he and his supporters have the constitutional right to assemble and voice their opinions. Protesters rejoice and celebrate when they curse, causing pro-Trump individuals personal damage.

They claim to be protesting a racist, fascist person, yet use a fascist tactic by suppressing pro-Trump groups with different political beliefs. Anti-Trump protesters are fighting what they claim is fascism, with fascism.

The hypocrisy of the protesters is absurd. They claim to be protesting a racist, fascist person, yet use a fascist tactic by suppressing pro-Trump groups with different political beliefs. Anti-Trump protesters are fighting what they claim is fascism, with fascism. The major problem with these protesters is that their violence and obstruction of traffic are violating the rights of Trump supporters.

Thousands of leftists are coming and disrupting Trump rallies in hordes, yet one does not see that with Republican supporters. Right wingers are not crowding in masses at Hillary Clinton or Bernie Sanders rallies with the intent to shut down the rallies and incite fights with their supporters. In fact, one of the few disruptions at a Sanders rally came when Black Lives Matter protesters stormed the stage and took the microphone from Sanders.

Trump protesters have prevented anyone interested in hearing his points from entering rallies in cities all around America.

While Trump’s views may be controversial and upsetting to many, people should allow him to foster discussion around issues in our society. Trump protesters need to allow others to hear Trump’s ideas and form their own opinions.