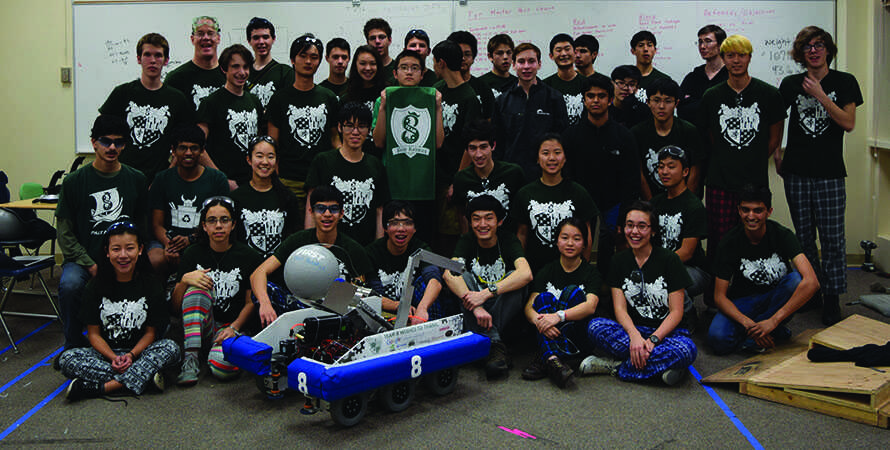 A group of students gather in the auto shop to go over their achievements and goals for the future. Upon first glance, one thing stands out: they all have green hair. With minimal guidance from adults, this group of unique students deals with the trials and tribulations associated with running one of the most popular clubs at Palo Alto High School.

The Paly robotics team was instituted over 20 years ago. What was once considered an after school club has evolved into a highly organized extracurricular activity. Paly Robotics split into sections to further enhance the diversity of the robotics program, including building, programming, art, business, product management, lab management and web design.

“One of the most important jobs as team captain is to help other leaders on the team develop communication and leadership skills,” senior and captain Claire Kokontis said. “That means I give them enough space to try things on their own, and I try to be there if they need advice or  guidance. Of course I don’t always have the answers, but it’s helpful to be able to look back at my experiences on the team to try to help.”

During the school year, competitions are hosted by non-profit organization For Inspiration and Recognition of Science and Technology (FIRST). This year, Paly placed 27 out of 75 state teams at the 2016 FIRST Championships, competing in the “Curie” division, one of the eight total division. This marked a large improvement from the team’s performance last year, where they did not qualify for the championships. Since this year’s official season is over, the postseason competitions will begin. The competitions outside of FIRST can be organized by any robotics team and the rules are modified accordingly by the organizers.

Junior Blake Novak was impressed overall with how the team dealt with the FIRST competitions this year by maintaining a positive yet competitive mentality. This would prove to be necessary to advance farther than they had ever gone in the FIRST championships.

“We placed 27 in our division but did not make it to [semi-finals], the final bracket which determines the world champion competitors,” Novak said. “But it was a great learning experience for the team as a whole to experience a whole new level of the competition.”

In addition to learning more about the Robotics and making great advancements during the competitive season, the team has fostered interest in different fields for team members to explore such as engineering or graphic design. Junior Kenneth Cheung was able to dive deeper into what began as a hobby and later altered into a possible career path because of the learning environment he was introduced to.

“I became the team Lab Manager during my sophomore year and that allowed me to become heavily involved in the technical aspects of building a robot,” Cheung said. “I became Build Captain my junior year and I spend so much time at robotics because it is truly what inspired me to want to pursue engineering in college. It not only gave me a career path but it has taught invaluable technical skills such as machining and CAD [Computer Aided Design] and interpersonal skills like leadership and public speaking.”