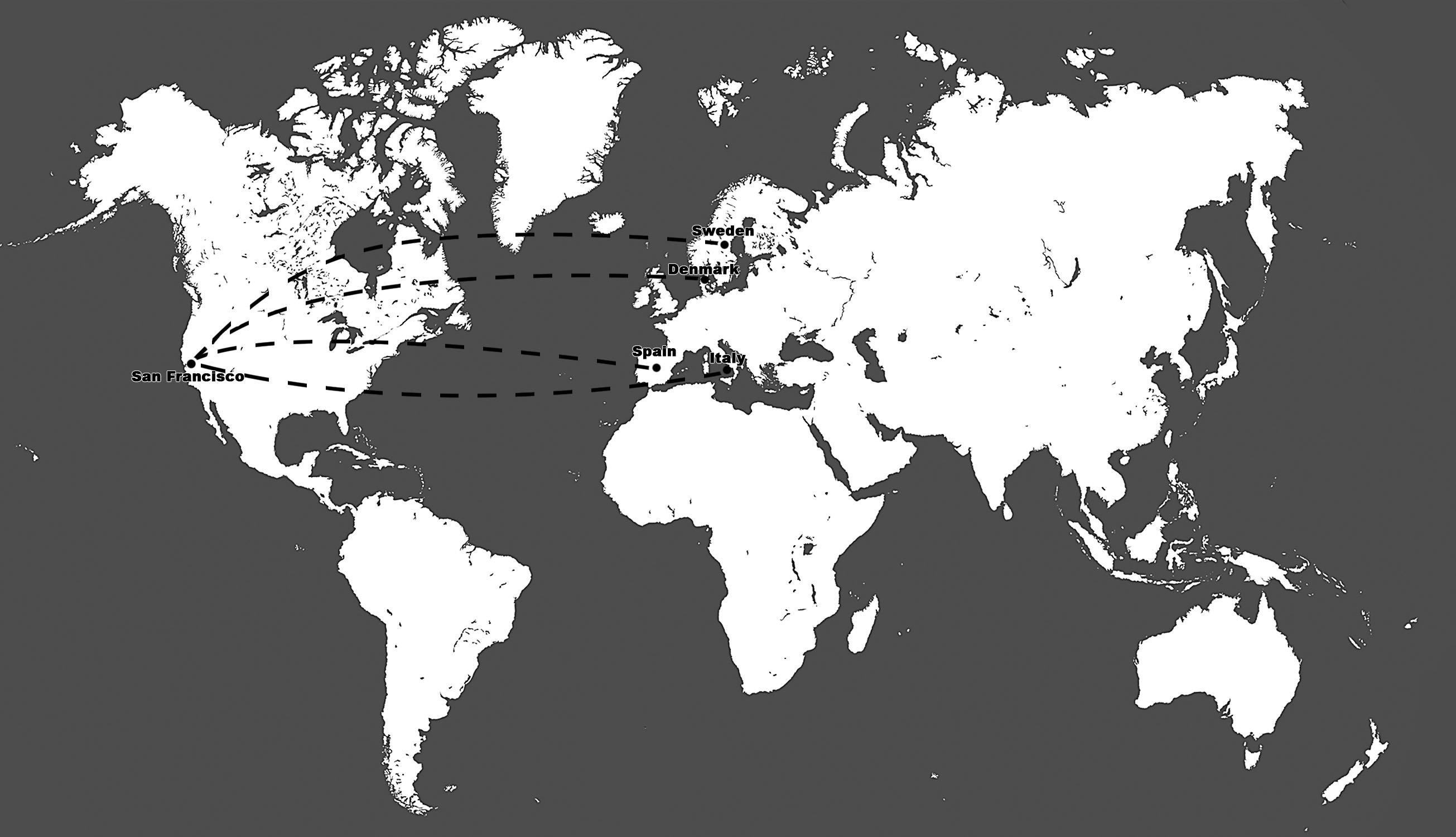 Students from all around the world are attracted to Silicon Valley schools, where they can engage in a different type of education.

Madeline McCluskey
Lifestyle
May 21, 2016
Attending school in a different country offers a number of life-altering experiences and eye-opening opportunities. There are many students at Palo Alto High School who are a part of year-long exchange programs or have moved to Silicon Valley this year from their respective home countries.

Exchange programs allow foreign students to travel to the United States to learn alongside American students. Typically, these students stay with a host family and are completely immersed in American culture. Many are randomly assigned to their families. However, senior Alessandro Reale knew his host family prior to leaving Italy and embarking to the U.S.

“The fact that I already knew my host brother helped me [decide to come here],” Reale said. “When you do a year abroad, you sign up for it but you have the same chances to go to Washington as you do for Florida or California. I did what is called a direct placement so I already knew that I was coming here.”

For a teenager, moving to a foreign country for a year can be an intimidating experience. Luckily, junior exchange student Rebecca Sand received support from her friends and family prior to making the commitment to leave Denmark.

“A lot of my friends did [exchange programs] and they said it’s the best experience ever,” Sand said. “You’re never going to have an experience like it. But I actually didn’t know that I wanted to do this until a week before it was too late. I was in a bit of a hurry to get here but everyone said, ‘your English is going to improve so much, you’re going to meet so many new people, it’s just a great experience.’”

Every student has to adjust to the potentially new language, living situation, city and school upon arriving in Palo Alto. Junior Paloma Ruiz moved from Spain at the start of the school year and immediately found herself forced to adapt to the different social environment.

“Socially, [Palo Alto is] super different, because in Spain I have my eight best friends and we were super close since first grade,” Ruiz said. “But here, I feel like people flow around a little bit more between groups and friends. So at the beginning I was like, ‘I don’t have my close, close, close group of friends that I had in Spain.’ Here, I know people from different groups and I hang out with [different] people depending on the day.”

In addition to being exposed to a new social scene, students must also adapt to their new school. Teaching styles and classroom format in the United States vary greatly from those of Europe. Ruiz noticed the distinct difference in grading standards between Spain and Palo Alto.

“In Spain, the average GPA could be a 3 to a 3.2 and if you have that, you’re fine with it,” Ruiz said. “But here, if you don’t have a 4.0, people would think that you’re stupid and never going to get into college. I feel that here, it’s easier to get a good grade, but you need to get them.”

Additionally, foreign students have expressed that the U.S. college application process is very different to that of Europe. Junior Elin Stakeberg moved to Palo Alto from Sweden at the beginning of the academic year. According to Stakeberg, in Sweden, students may retake a single standardized test — the Swedish Scholastic Aptitude Test — until they earn their desired score. The student can either submit this test score or their grades when applying to a university.

“[In America], people see beyond the grades on a paper –– they see the person behind the grades,” Stakeberg said. “Which is really great, but at the same time the whole process is a lot to take in.”

The experience of moving across the world and becoming accustomed to a foreign culture is very unique. Many foreign exchange students are finding that they have grown tremendously as people after their year abroad.

“You grow because you know yourself better: you know your limits, your fears, your sources of strength,” Reale said.

Though traveling thousands of miles and beginning a new life may not appeal to all, it is undeniable that studying abroad provides students with a multitude of beneficial opportunities to learn. Having lived in both Australia and Sweden, Stakeberg has become accustomed to the process of moving long distances, and has learned to take advantage of it.

“I see it as an opportunity: I get to see a whole different culture and get to meet so many new, wonderful people,” Stakeberg said. “You get a new perspective [on] life; you’re not stuck in one area your whole life. You get to see new parts of the world and experience so many new things that change your way of thinking.”

After living in a foreign country, many students find themselves cogitating on their experiences with their new friends, family and schools, and have found that their personas have changed to reflect these new experiences. Ruiz compared her personality prior to moving to the U.S. with her current persona, and is pleased with how she has changed.

“There are so many people from different cultures here and it’s great to see the variety of the school,” Stakeberg said. “I think that the school here has given me more of an open mind. To see that people are different and that’s completely okay. It’s more fun that people accept and not give into the normal. Here, it’s better if you actually accept who you are.”

As the exchange program is only temporary, some students wish they had taken full advantage of their time in America. Reminiscing on his time at Paly, Reale regrets not having been more outgoing from the start of his exchange.

“I wish I [had enjoyed] my experience [from] the beginning without being so stressed out,” Reale said. “I wish I had talked to people more instead of being shy. You really have nothing to lose, you’re going to leave in months. So you should really be yourself and take advantage of everything.”

After spending time at Paly, Ruiz’s personal growth has greatly improved her outlook on life. A year abroad expands students horizons, as many of the foreign exchange students have discovered this year.

“I’m happier with myself here,” Ruiz said. “There are days here where I’m just super happy. I’m a happy person in a happy world.”