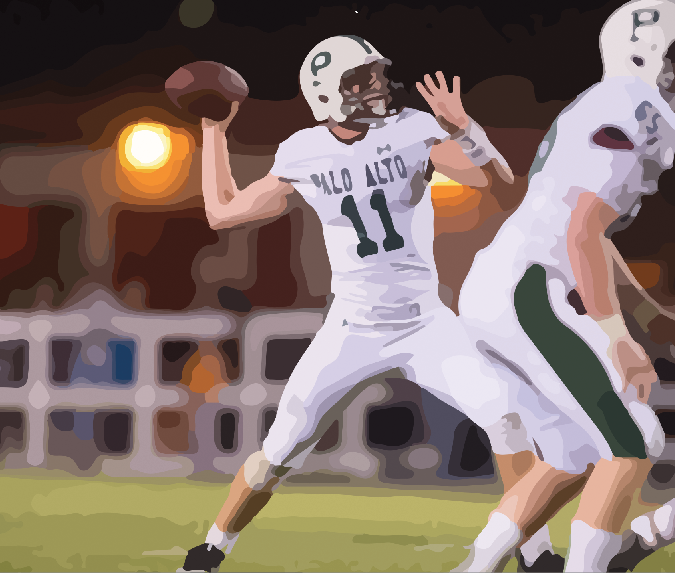 Charlotte Cheng
Sports
October 5, 2016
Due to an unfortunate concussion suffered by senior and first-string quarterback Jordan Schilling in a 42-14 loss against the San Benito Haybalers, sophomore Jackson Chryst has since taken up the mantle of quarterback for Palo Alto High School. The last sophomore to lead the Viking’s offense: Keller Chryst, his older brother.

Since Schilling’s injury, Jackson has started four games. The Vikings lost three out of those four games, but managed to pull out a strong 44-31 win against Santa Clara High School. Chryst is maintaining an average of 84.5 total passing yards each game and a 40 percent pass completion rate.

George Chryst’s three sons, Geep, Paul and Rick Chryst, have continued the football legacy. Jackson’s father, Geep, was the former offensive coordinator for the San Francisco 49ers during the 2015-2016 season. Paul is currently the head coach for the University of Pittsburgh, and Rick was the former commissioner of the Mid-American Conference.

“Since my dad coached in the NFL, he has helped me learn and understand the game,” Jackson said. “On Sunday nights we watch film together, and he helps me breakdown coverage [on the field] and where to attack the defense.”

The first Chryst to attend Paly was Jackson’s brother, Keller. After moving from North Carolina to Palo Alto in 2011, Keller quickly earned his position as starting quarterback. During his time at Paly, Keller led the Vikings to three Central Coast Section California Interscholastic Federation (CIF) playoffs, including the 2011 title game. After he graduated in 2014, Keller committed to play football across the street at Stanford University and decided to redshirt his freshman year as a Cardinal.

With all of Keller’s accomplishments, Jackson has an impressive role model to look up to. Since a young age, the two brothers played pick-up football in their backyard with other kids in their neighborhood. They were always on the same team; Keller played quarterback and Jackson lined up as wide receiver.

“Nowadays I don’t see my brother that much, but over the summer, we go over to Stanford and workout together,” Chryst said. “Sometimes him and his friends will come to my games, and he gives me some feedback on what I need to improve on, just like my dad.”

Having gained so much football knowledge from Chryst’s fellow family members, Jackson believed he was ready to lead the team.

“[When I found out I was going to start,] my first concern was if Jordan [Schilling] was okay,” Chryst said. “After that, I knew I had to take leadership of the offense and leave everything out on the field the next game.”

Despite taking over the role of the starting varsity quarterback, Jackson has limited experience in the position. When he first started playing football in fourth grade, he was a middle linebacker due to his above-average size. In fact, Chryst’s quarterback career only started last year when he played for Paly’s junior varsity team.

“I [had] only played three games as a quarterback before the start of this year,” Chryst said. “It is really hard to get use to the speed of the game and how different varsity is from junior varsity.”

Chryst’s lack of play time as a quarterback was due to his injury his freshman year on junior varsity. He broke his collarbone in a game which, resulting in him playing for only three games.

However, the rest of the team along with varsity head coach Danny Sullivan has high hopes for Jackson. Sullivan is aware of the football legacy in the Chryst family and although Jackson is still an underclassman, he believes that Jackson’s potential is very promising.

“I don’t think he realizes how good could he can be if it all comes together,” Sullivan said. “Obviously, he’s learning a new offense and playing varsity as a sophomore and I think it’s all about taking baby steps to make sure that he’s comfortable with his position.”

With a good understanding of the game and the support from his football family, Chryst hopes to follow his older brother, Keller, and play in college–—perhaps even professionally. Jackson strives to improve every day and work his hardest on the field.

“I think he has a lot of potential and I am very excited to see the type of quarterback he will become,” Schilling said. “From what I have seen, he plays with a lot of heart, passion and competitiveness which are qualities I look up to. I think he can be great, and I know he will work hard to get there.”