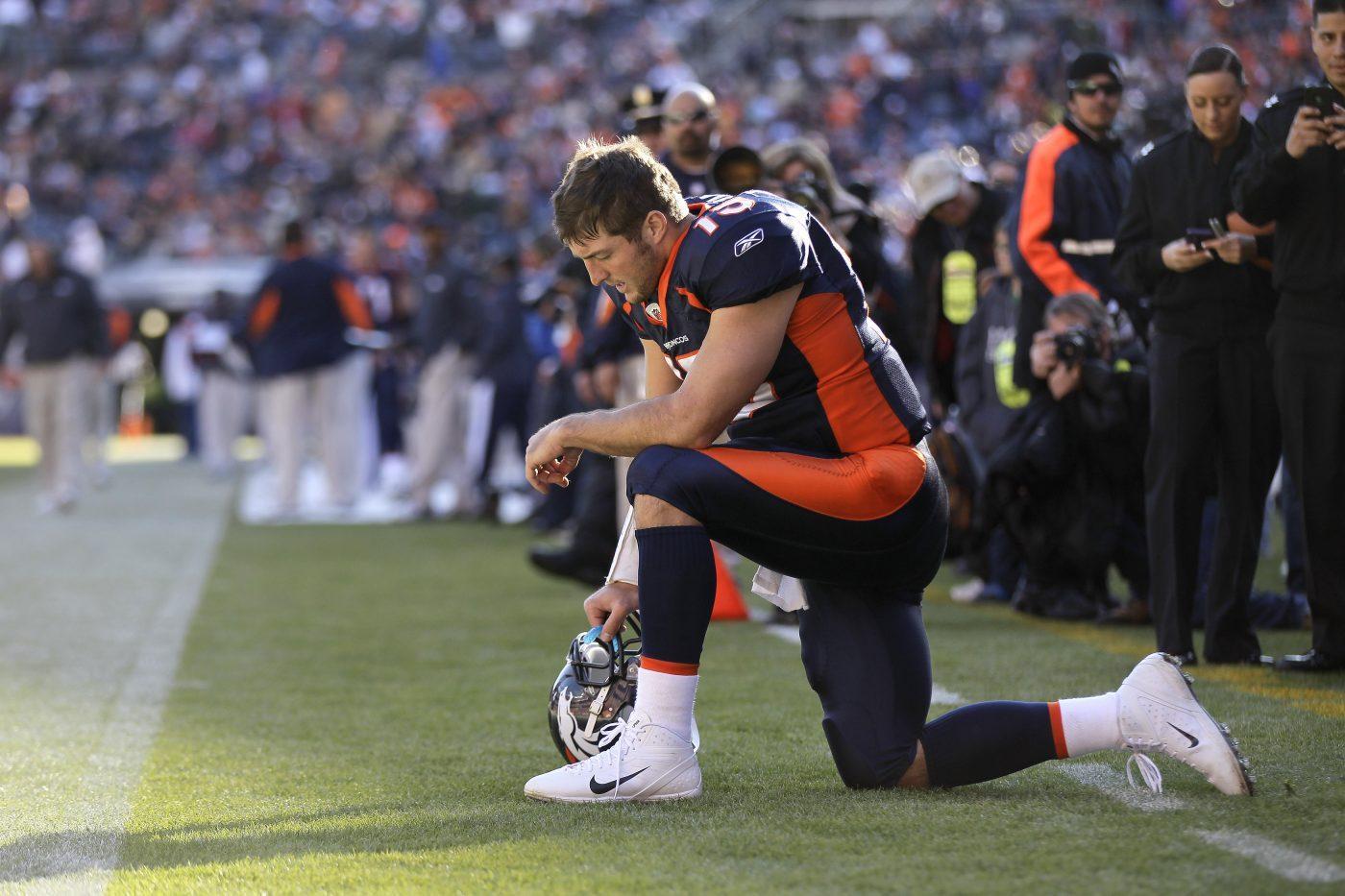 Denver Broncos quarterback Tim Tebow (15) prays in the end zone before the start of an NFL football game against the Chicago Bears, Sunday, Dec. 11, 2011, in Denver. (AP Photo/Julie Jacobson)

Nicholas Melvin
Sports
October 5, 2016
Since the end of the 2012 National Football League (NFL) season, something has been missing from the lives of American sports fans. More specifically, someone. He was the Messiah of the NFL, and quite possibly the worst quarterback to play in the league this century (in close contention with Johnny “Football” Manziel and Jamarcus “Jamarc-Bust” Russell). This man is Timothy Richard Tebow.

Unfortunately for everybody who respects and appreciates the magnificent sport of football, Tebow will probably never play another snap in a professional game. The erstwhile Florida star and double Heisman winner has shifted his goals from the gridiron to the baseball diamond.

Tebow last played organized baseball more than a decade ago, during his junior year of high school. Back then, he was considered to be a top player, and many scouts expected that if he continued to work hard he could potentially be picked as early as the second round of the Major League Baseball (MLB) draft. Unfortunately, that is not what happened. Tebow chose to focus on football and did not play baseball during his final year of high school.

After a successful college career, Tebow was drafted 25th overall by the Denver Broncos. Tebow found moderate success, posting a 7-5 record  and even winning a playoff game. The following season he was traded to the New York Jets after the Broncos signed quarterback god, Peyton Manning. Tebow saw limited playing time with the Jets, and was eventually released. After that, he continued to bounce around, but never earned another roster spot on an NFL team.

Now, Tebow is looking to do what not even one of the greatest athletes of all time, Michael Jordan, was able to do — successfully pick up another sport (baseball) after not playing for years.

There are countless reasons why this endeavor is a waste of everyone’s time. Let’s start with his age. At 29 years young, Tebow is a decade, or more, older than the majority of the players he will be competing against. Making it to the big leagues is a lifelong enterprise that requires a commitment similar to Tebow’s commitment to Jesus Christ. And even those who stay true to their goal and stick with baseball their entire lives, only a lilliputian amount of them achieve their goal and make it to the MLB. In fact, out of the 2006 MLB draft class, only 36 percent of those selected made it to all the way to the highest level of the game. These were players who had been working nonstop at their goal since they were toddlers, not failed NFL quarterbacks who are looking to do what millions of other Americans have failed at.

Another reason that Tebow will come up short of his newfound dream to play alongside some of baseball’s biggest stars is because of the fact that he does not have the talent to play at such a high level. Yes, he put up some pretty good numbers in high school and won some pretty prestigious awards, but there are a lot of kids who are pretty good in high school. Every city has a title, every county an MVP and every state a championship. Indeed, Tebow is roughly 1 of 12,000 kids who have been rated all-state in their respective state since the year 2005. Given that he is contending for 1 of 750 spots on an MLB roster, the odds do not look too good for Mr. Tebow.

Tebow will also struggle on the road to the show because he is relying on the same pray hard, play hard mentality that he used while playing in the NFL. And while this technique is impressive and admirable, it is not one that typically succeeds in the world of baseball. In baseball, you can work as hard as you want and as long as you want, but when it all boils down to it, all that counts is whether or not you can hit a 105 mile per hour fastball 420 feet. No amount of practice can teach that.

Tebow’s dream of playing in the MLB is understandable. After all, who doesn’t want to be a professional baseball player? Unless, of course, one is turned off by the idea of getting paid a ton of money, having a great group of teammates with whom you form a special bond and becoming a one percenter by playing a child’s game for a living. But the terms by which Tebow is attempting to reach this goals are parasitic to the very foundations of the sport itself.

Tebow is taking advantage of his football (and he would probably tell you God-given) popularity, and feeding off the money loving corporation that is the New York Mets. Since his signing, Tebow jerseys are the most popular amongst Mets’ players. That, and only that, is the reason that Tebow was signed by an MLB team. He has no legitimate shot at having a career in the big leagues, and everybody knows it.

In doing this, Tebow is taking an opportunity out of the hands of hard working highly potent MLB prospects who are trying to accomplish their one and only goal in life. Tebow is leeching from the foundation of baseball. He is chipping away at the brittle base of America’s favorite pastime. And he has to be stopped. God Almighty, strike him out!