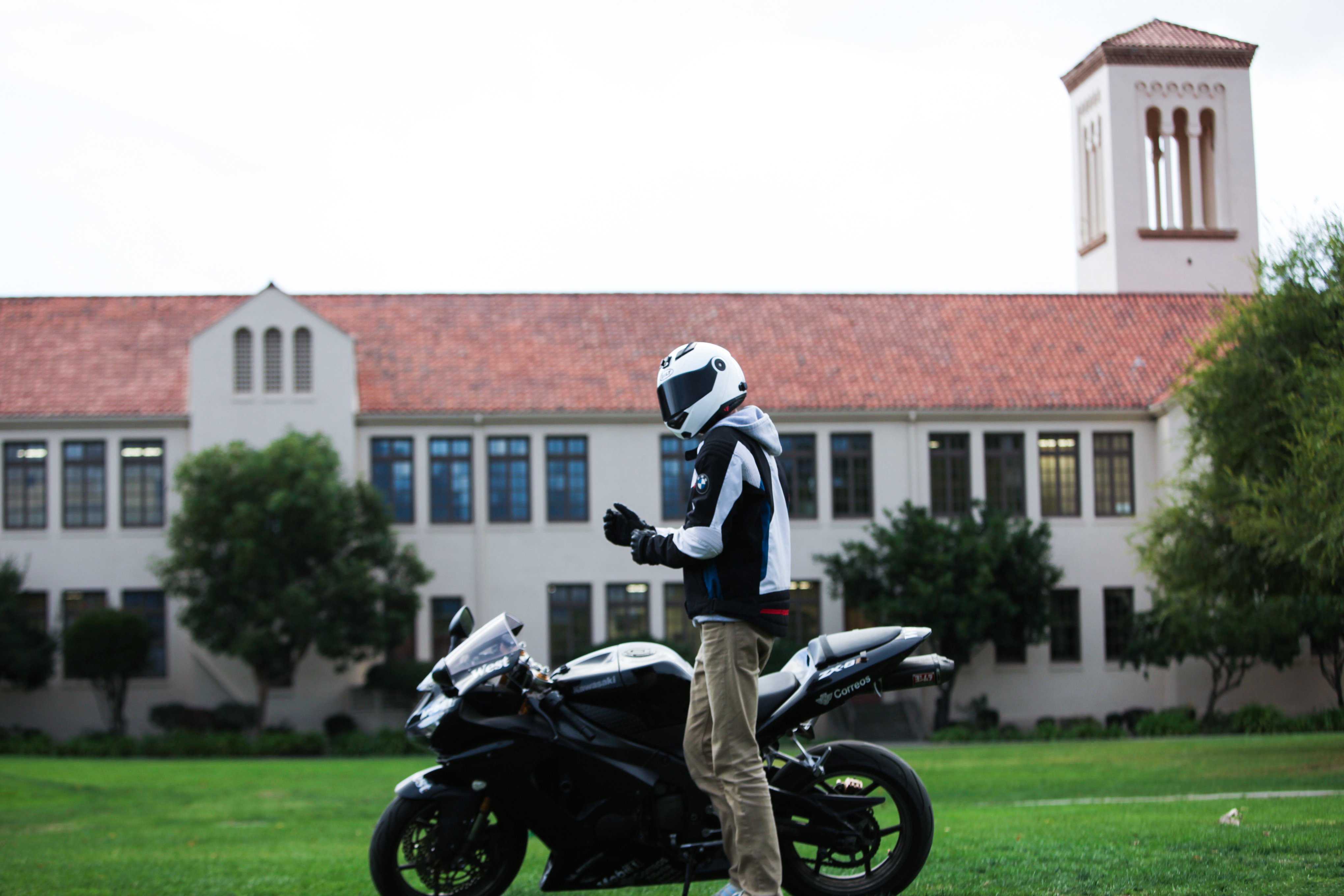 Senior Adrian Smith has been riding his bike since receiving his permit in June. Bikes are cheaper and faster alternatives to cars.

Benefits of riding a motorcycle

Joanna Falla
Lifestyle
October 26, 2016
It is a rite of passage for Palo Alto High School students to make the transition from biking to driving. The act of driving yields a feeling of responsibility, as well as the perks that come with riding in an air conditioned or heated vehicle. While this sounds like a good deal to most students, a few choose to ride on the road less traveled with less conventional modes of transportation.

Senior Adrian Smith has been riding a Kawasaki Ninja ZX-6R to school since he received his motorcycle permit in June. Smith took a class that required written work as well as an assessment of the student’s riding ability on a closed course.

“I took a three day class in Gilroy in June to get the permit,” Smith said. “There was a 3-hour classroom session the first day and two 5-hour classes outside in a parking lot where the students ride 200cc motorcycles through cones and learn techniques.”

Motorcycles are indeed known for their dangerous qualities, and having a teenager behind the handlebars could give a stigma to motorcyclists. Additionally, there are major fear factors for the rider himself.

“There are only small instances when I feel fearful of my position on the bike and those moments are on sharper turns,” Smith said. “They teach us to ride without fear so it doesn’t take away any time for the rider to react to the situation.”

Not only does Smith deal with people judging him as a teenager on a motorcycle, but he also had to convince his parents that he was responsible enough to handle a motorcycle.

Whenever you see another biker on the road you’re supposed to wave to them, acknowledging them as part of a brotherhood. Compared to cars, there aren’t many bikers on the road so you have a feeling of connection with other bikers.

“My dad was the one who gave me the idea initially because he rides too,” Smith said. “My mom took some convincing to get her to be okay with it, but now all my peers and family trust me on this machine.”

Smith drives regularly to school, but riding a motorcycle provides more benefits than getting through the nightmare at Churchill parking lot. From the beautiful views to the cheaper commute, there are many perks to taking life by the handlebars.

“I wanted a motorcycle because of the freedom on the road, the skipping through traffic, and the speed of course,” Smith said. “It’s an affordable alternative to a car because you can get higher quality for a lot less. The gas mileage I get is around 45-50 miles per gallon, so I’m saving both time and money while riding.”

Currently, Smith can only ride by himself until he receives his official license in December. However, that doesn’t make riding a motorcycle a solitary activity for him. Smith goes on road trips with his dad up along the coast and bands a community with other bikers.

“We spend a lot of time together now because we go on rides, talk a lot during breaks and stuff.” Smith said. “Another cool aspect is whenever you see another biker on the road you’re supposed to wave to them, acknowledging them as part of a brotherhood. Compared to cars, there aren’t many bikers on the road so you have a feeling of connection with other bikers.”