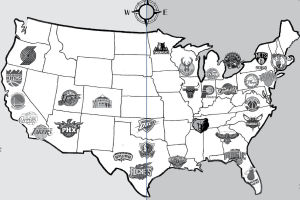 The National Basketball Association (NBA) is the premier collection of basketball talent around the world. Each year, 30 teams compete for the ultimate prize: the championship, battling the other 29 through a grueling schedule of 82 games as the weak and the willing are separated, dramatically changing the balance of the league from year to year. The Campanile has compiled a comprehensive NBA preview to share with everybody– from the casual fan to the hardcore fanatic –a taste of what’s to come this season.