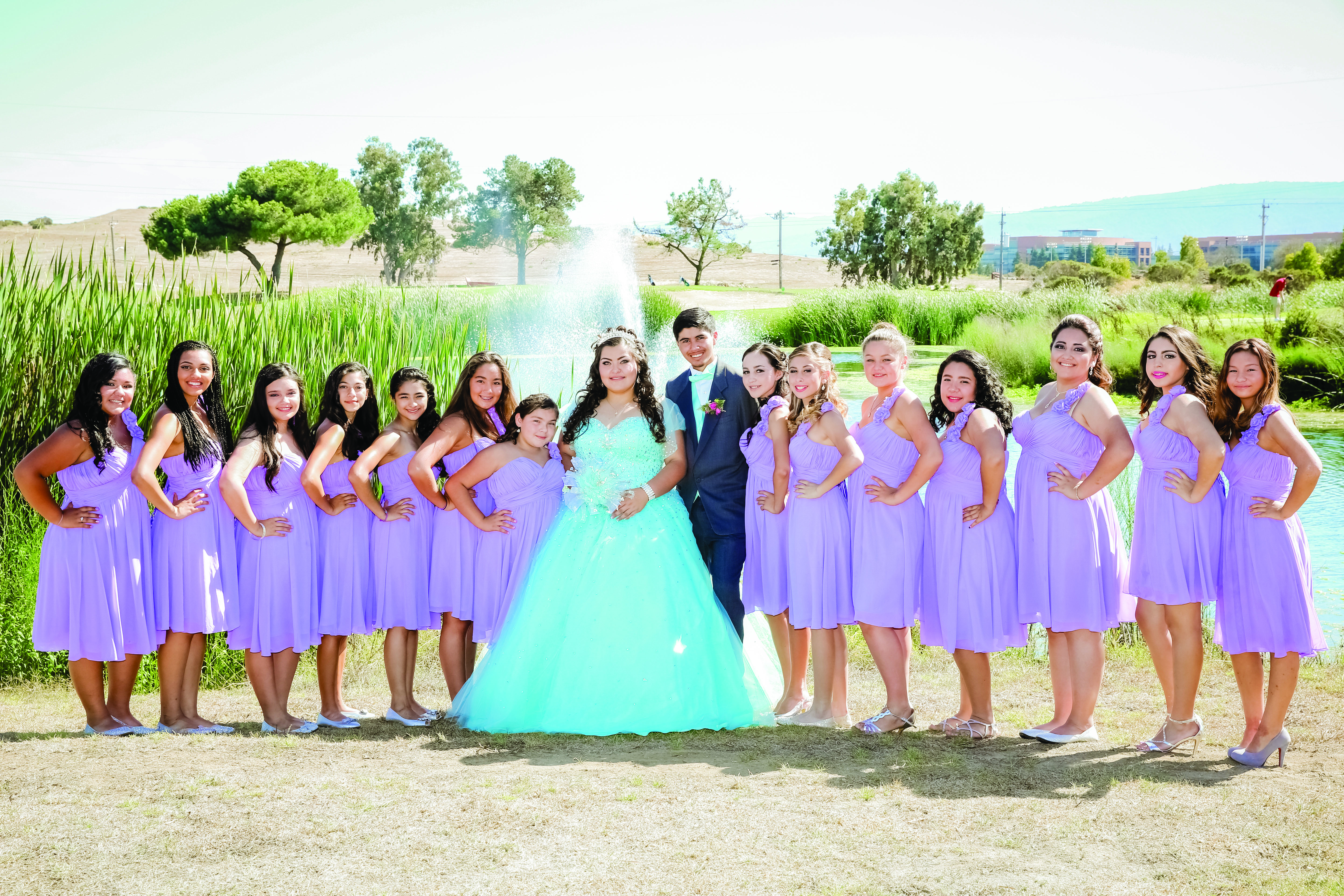 Alice Zhao
Lifestyle
October 28, 2016
Similar to a Jewish Bat/Bar Mitzvah or a sweet sixteen, a Quinceañera marks the crucial turning point in a girl’s adolescence. When a Latina girl reaches 15, it is traditional to hold a Quinceañera to honor her progression into womanhood with a large and formal celebration. It is a family-oriented event and also serves as a reunion for many families who do not live nearby. However, many girls choose not to have Quinceañeras in favor of going on a trip or having a more casual gathering.

Quinceañeras have their roots in Catholicism but many today are secular due to lack of involvement with the church. Traditionally, the Quinceañera begins with a mass in which the girl was baptized, demonstrating to God her journey from birth to womanhood, which the church dedicates a ceremony to.

Important people who are part of any Quinceañera are the birthday girl herself as well as her family, godparents and the court.

The court is comprised of Damas and Chambelanes, who are either siblings, cousins or friends of the birthday girl. Traditionally there are 14 girls that make up the Damas and 14 boys who make up the Chambelanes with one designated Chambelan de Honor, but the girl can choose how big she wants her court to be.

Traditionally, family members bestow many gifts on the girl, including a doll, bible, cake, dress, crown, pillowcase, ring, bracelet, necklace and high heels. Each of these items symbolize how the family recognizes the girl’s coming of age.

For both Kenia and Alexa, the traditional Father-Daughter Dance was the most emotional part of their Quinceañeras.

“I was dancing with my father for the first time and he had never danced before,” Kenia said. “I didn’t think my dad would do this for me so it was very emotional.”

“My little sister ended up crying [during the Father-Daughter Dance],” Alexa said. “My mom and my Grandma even got teary.”

There are other dances that are performed at Quinceañeras, notably the Surprise Dance, which is choreographed and rehearsed months beforehand with the court.

The whole dance is kept a secret until it is performed at the party. Kenia practiced her dance twice a week during the months leading up to her Quinceañera.

Both Kenia and Alexa had candy tables, where they laid out sweets for their guests to enjoy. The cake, gifted by the godparents, is also placed on the table.

It is similar to a wedding cake in terms of preparation, importance and aesthetic.

“We went cake tasting and browsed designs,” Alexa said. “I loved my cake; it had four tiers and was so pretty. It had two tiers of guava and two tiers of chocolate-white marble. The cake was an ombre from white to purple and was embellished with an ‘A’. We had around 300 attendees but the cake only had 150 servings.”

While traditionally Quinceañeras served Mexican food, today the birthday girl is allowed to choose whatever kind of food she wants. Alexa decided on Italian food while Kenia opted for Asian cuisine. The meal is done buffet-style due to the large number of guests.

Overall, both Kenia and Alexa described their Quinceañeras as emotional and unforgettable experiences.

“I’ve always dreamed of having a Quinceañera since I was very little because all my aunts and [female] cousins had one,” Kenia said. “The most important thing is inviting the friends and family over to have a lot of fun and enjoy the party.”

“I am very grateful that I was able to have one and share the experience with my friends and family,” Alexa said. “Things weren’t 100 percent, but it is important to know that this only comes once and not everyone is able to have a Quinceañera, so there is no point in having regrets.”

Similar to weddings in their grandeur and opulence, Quinceañeras require several months to a year of planning.

The venue, food, music and dress need to be booked months in advance. Even hair and makeup services need to be arranged well before the actual ceremony, since Quinceañeras are orchestrated on such a grand scale.

While most Quinceañeras are held indoors in either halls or ballrooms, the events can also be held outdoors in ranches or backyards.

“I booked my hall [venue] a year in advance,” said junior Alexa Morales. “My uncle, who caters to parties, organized the food a year beforehand as well. Music was done six months ahead because I wanted to avoid anything last-minute.”

Alexa had three different types of music at her Quinceañera: a Mariachi Trio, DJ and Banda.

“The Trio played during the meal,” Alexa said. “But I was most excited for the Banda because they liven the party up and make everyone want to dance. The DJ would play when the Banda was on break.”

According to Alexa, the month leading up to the Quinceañera is the most busy and the most crucial. During this time, all details are finalized, dances are rehearsed and professional pre-Quinceañera photos are taken.

Like in many other coming of age ceremonies, the dress that a girl wears on her Quinceañera is one of the most important aspects of the entire occasion.

The Quinceañera dress is more elaborate than a prom dress, and bares more similarities to a wedding dress. The dresses are often long, frilly and pastel-colored. Because of the ornate detailing and extravagance of the dresses, they usually cost several hundred dollars.

“The dress has to be ordered [a] minimum [of] four months before [the Quinceañera] so that you make sure your dress gets to you on time,” Alexa said. “Popular sizes are commonly taken, so your dress may have to be made.”

Typically dresses are bought from stores or catalogs, however dresses can also be custom-made if there are no appealing styles or if the girl wears an uncommon size.

Certain families have a special dress that is passed down from generation to generation and holds special meaning.

Paly sophomore Kenia Morales (not related to Alexa Morales) went to four different stores to find her perfect dress, including a store in Los Angeles. She ended up purchasing a frilly blush pink gown from a local store.

“It was really hard because there were so many to choose from, but I had to pick one that I loved,” Kenia said.

Alexa found her dress while flipping through a catalog — it was an aqua dress with an embellished corset.

“I thought it was the one,” Alexa said. “I didn’t like any of the other dresses like I liked my dress.”

While a Quinceañera dress is only worn once in a girl’s lifetime, its significance remains.

“My dress is currently hanging in my closet and it is a really cool reminder that I was fortunate enough to have a Quinceañera,” Alexa said. “I honestly wish I could wear it more often.”