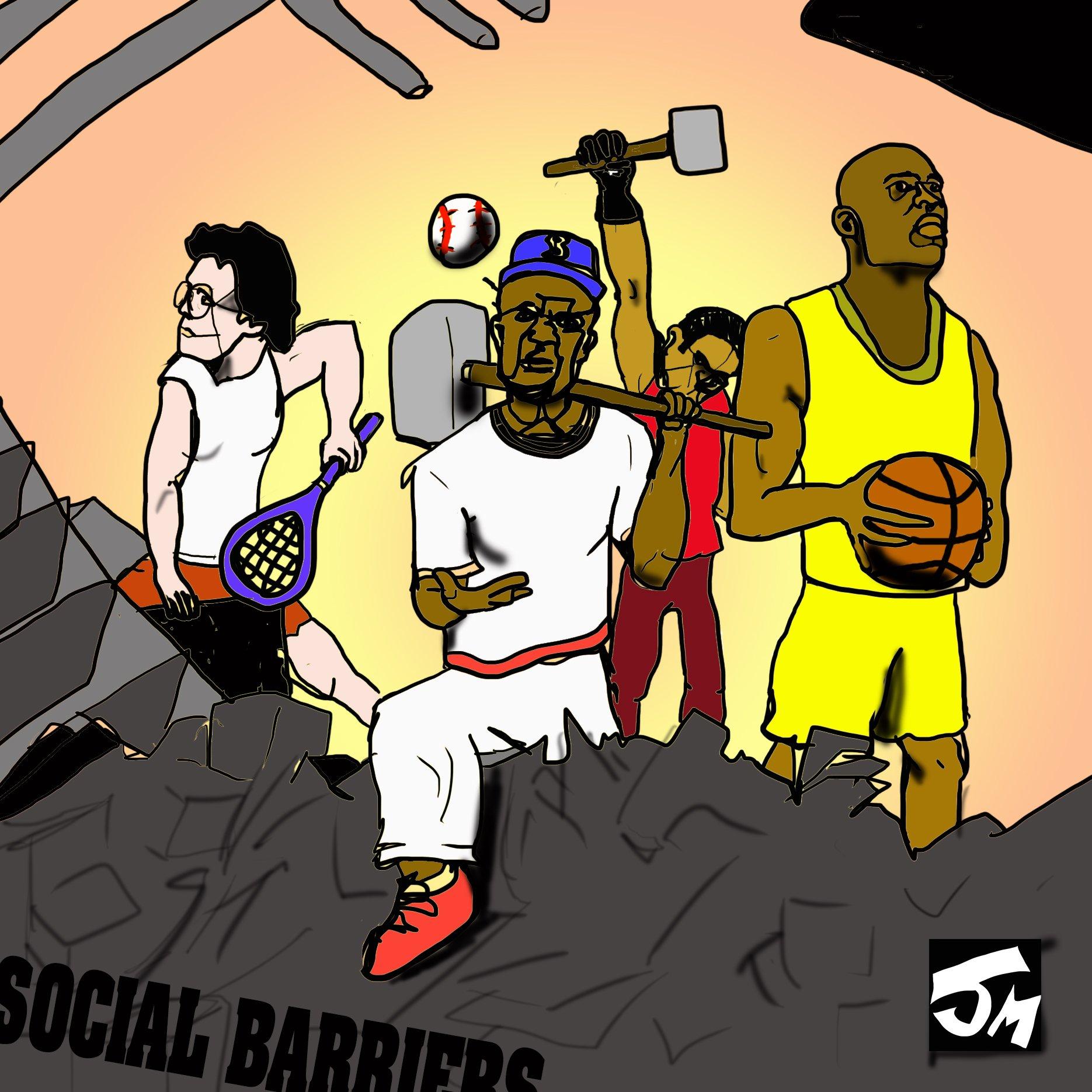 Influential Moments in the History of Sports

Mackenzie Glassford
Sports
December 6, 2016
Sports have always been a centerpiece of American culture. Besides providing its die-hard fans with hours of entertainment and a sense of comradery, athletics often provides glimpses into an era’s sociopolitical climate. Some moments in sports history have become iconic for transcending the game, and making a statement about society as a whole, not only changing the way people view sports, but also the way they viewed the world.

One of the most renowned moments in sports history took place on April 15, 1947. Years before Martin Luther King Jr. led the Civil Rights Movement, years before boycotts and sit-in protests and years before Rosa Parks refused to give up her seat, Jackie Robinson ran out onto Ebbets Field as the first and only black member of what was previously one of America’s most racist institutions — Major League Baseball (MLB).  Because American history has always been so heavily influenced by the legacy of slavery, desegregating the nation’s favorite pastime was monumental. Because of baseball’s importance in American culture, Robinson’s courage and success inspired many in the nation, black and white alike, and ignited a step towards equality in American baseball.

Because American history has always been so heavily influenced by the legacy of slavery, integrating the nation’s favorite pastime was monumental.

Battle of the Sexes

Title IX, the federal civil rights law passed in 1972 that prohibits sex discrimination in school sports, was a major milestone for female athletes in America. However, the professional sports world was still plagued by sexism and discrimination. It came to the public’s attention when an arrogant professional tennis player named Bobby Riggs claimed he could beat any of the top female tennis players. Billie Jean King, who was in the top 10  female players, accepted his challenge in 1973. Hotly anticipated, the match drew a television audience of 50 million people worldwide, while over 30,000 spectators watched live in the Astrodome in Houston, Texas. King defeated Riggs in three straight sets. Not only did her victory affect the sports world, it affected society as a whole. During a time when Title IX was newly in effect, it validated the viewpoint that women belonged on the field.

One of the most iconic images from sports history is that of track stars Tommie Smith and John Carlos raising their black-fisted gloves from the medal podium at the 1968 Summer Olympics in Mexico City. This simple, yet powerful, protest took place in the middle of the Civil Rights movement, one of the most racially charged time periods in American history. The two athletes were immediately booed for their actions and were expelled from the Games, but supporters were moved by the act and praised Smith and Carlos for their bravery. At the time, many people thought politics had no place in sports, much less the Olympic Games, and this stunt opened future doors to political discourse in sports. It also brought worldwide attention to the racial divide and general inequity in America. Although nearly fifty years have passed since the Games, Smith and Carlos are still subject to criticism, and are often deemed un-American due to their protest.

On Nov. 7, 1991, Earvin “Magic” Johnson shocked the world when he announced his retirement from professional basketball due to the fact that he had acquired the Human Immunodeficiency Virus (HIV). The announcement came at the peak of Johnson’s career. In the two decades years since, Johnson has dedicated much of his time and money into educating people about HIV and fighting HIV/AIDS discrimination, even creating his own foundation to help combat the virus. His announcement came at a time when most believed that only homosexuals could contract HIV. Indeed, Johnson’s statement was the beginning of a more open conversation about the previously taboo topic of HIV. Johnson led the way to acceptance of the virus and helped medical progress to be made towards its cure.

Football has long been thought of as the most hyper-masculine sport in America. However, that did not stop Michael Sam from announcing his homosexuality to the world just before the National Football League (NFL) Scouting Combine in 2014. Although his performance at the Combine wasn’t spectacular, he was still a hot prospect after being named the Southeastern Conference co-Defensive Player of the Year in 2013 at Mizzou. The day after his announcement, Sam dropped 70 spots, almost two full rounds, in the NFL draft rankings. Going into the draft, it was a mystery whether or not a team would take a chance on him not only as a player, but also on his story. The days went on without Sam being picked, and finally, in the seventh round, with only eight picks left, the St. Louis Rams drafted Sam to their team. When the announcement was made, Sam had crushed stereotypes about sexuality in sports as he walked across the stage. Unfortunately, although Sam was the first publicly homosexual player to be drafted, he was cut from the team before he could become the first  openly gay player to play in a regular season NFL game. Despite leaving the organization and being unable to land a slot on another NFL team, Sam continues to advocate for LGBTQ rights.

Sports can be a casual pastime. They can be a time-consuming hobby. Sometimes, sports can change the world. The aforementioned athletes, and many more, have used their significant platforms to inspire change and spark international discussions about social justice issues. The sports world is incredibly influential and has helped our society countless times to evolve and move towards a more progressive culture. Each of these moments have left a lasting impact and are cemented in history.  As Nelson Mandela said: “Sport has the power to change the world. It has the power to inspire. It has the power to unite in a way that little else does.”