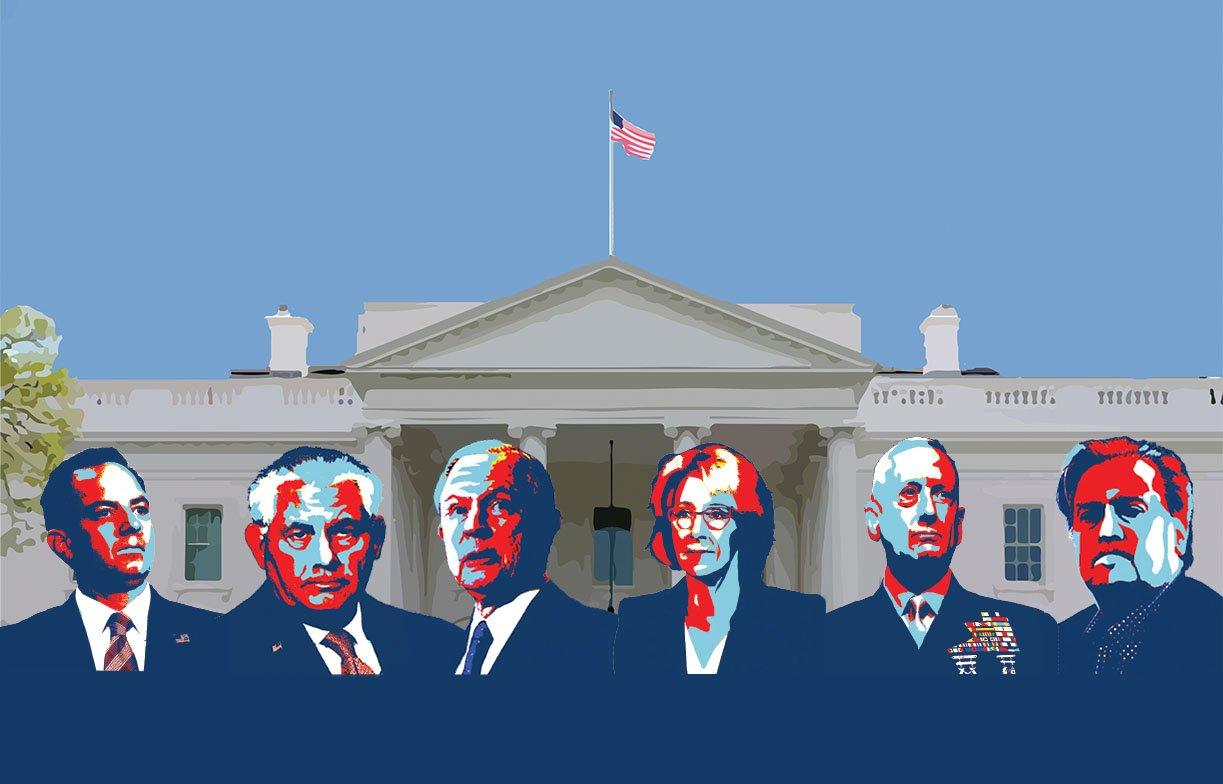 Yael Ben-Shachar
Lifestyle
February 1, 2017
On Nov. 8, history was made when Donald Trump, a former reality star, was elected to be President of the United States. Trump is the first president in American history to be elected without any formal political or military experience, but also the president with the lowest approval rating of any president in modern history at the time of the inauguration. Consequently, it is crucial for Trump to have a solid and highly qualified cabinet. One of Trump’s main campaign slogans was “drain the swamp,” a pledge to stray from the status quo of Washington D.C. in an attempt to lessen governmental corruption. However, his predominantly white male cabinet appointments have not shown any attempts at diversity, which could lead to backlash from citizens in the future.  Here’s a look at some of Trump’s most controversial picks.
Chief of Staff: Reince Priebus
As Chief of Staff, Reince Priebus is the highest-ranking employee at the White House. The job of Chief of Staff is different under each administration depending on the needs of the president, but generally, the position is to assist the president. Chief of Staff controls access to the Oval office, manages communication with the president, oversees the White House staff and negotiates with Congress and other governmental agencies to enact the president’s agenda. Previously, Priebus served as chairman of the Republican National Committee (RNC). He subsequently received some backlash when appointed to Chief of Staff, because as RNC chairman, Priebus mostly dealt with procuring donations and lacks governing experience. Priebus notably criticized Trump in 2015 for proposing to temporarily discontinue the immigration of Muslims to the U.S. and for his comments about Mexican immigrants. Thus, many are hoping Priebus will provide Trump some much needed stability and balance.
Chief Strategist: Stephen Bannon
Stephen Bannon is arguably Trump’s most controversial pick, as until August 2016, he was the executive chairman of Breitbart News, an alt-right media outlet. Breitbart News was a large contributor to fabricated news during the election cycle, particularly contributing to spreading conspiracy theories. One such story was that Hillary Clinton was unable to run for president due to her alleged “poor health.” Bannon’s appointment to Chief Strategist has fueled opposition from many organizations, including the Southern Poverty Law Center, the Council on American-Islamic Relations and the Anti-Defamation League due to Bannon’s outspoken nationalist, misogynistic, racist, anti-Semitic and Islamophobic ideology. As a result, many fear that Bannon’s appointment may lead to an increased acceptance of white supremacist ideas across the nation.
Secretary of State: Rex Tillerson
Though Rex Tillerson donated in support of Trump’s opponent, Jeb Bush, during the election, Tillerson has been appointed as Secretary of State. The job of Secretary of State will require Tillerson to deal with foreign affairs, a task Trump believes Tillerson is qualified for due to his experience as CEO for oil company ExxonMobil over the past decade. Through his work as CEO, Tillerson has gained close ties with Russian president Vladimir Putin, sparking bipartisan controversy, which only escalated after reports were released that Russia had influenced the election. Human rights groups and environmentalists have also voiced their concerns of Tillerson due to his career pursuits at an oil and gas company.
Secretary of Defense: James Mattis
As Secretary of Defense, James Mattis will wield immense power over the U.S.’s military, second only to President Trump. Mattis has been part of the military since 1969, when he enlisted in the United States Marine Corps. Since then, Mattis has risen up the ranks to the title of general in the Iraq War, and later as head of Central Command, which is a portion of the U.S. Department of Defense. During his Senate hearing, Mattis disagreed with Trump on a few issues; being a proponent of the Iran Nuclear Agreement, he is more supportive of the North Atlantic Treaty Organization (NATO) and cautious of Russia. Mattis’ differing viewpoints from Trump’s apparent pro-Putin and anti-NATO views could prove to be beneficial in offsetting Trump’s widely unpopular ideology.
Attorney General: Jeff Sessions
Jeff Sessions was the first senator to endorse Trump’s presidential campaign. As Attorney General, Sessions’ job is to act as chief law enforcer and lawyer of the U.S. However, many people have voiced their concerns that Sessions may be too conservative for the job of Attorney General, causing possible setbacks in many social issues such as civil rights, LGBT rights and women’s rights. To date, over 1,400 law school professors have sent letters to the Senate, advising to reject Sessions’ nomination. Sessions has also been accused of making many xenophobic, homophobic and racist comments that worry many of his critics, as they could affect his decision-making as Attorney General.
Secretary of Education: Besty DeVos
In her role as Secretary of Education, Betsy DeVos has said she will move money away from public schools, claiming that public schools no longer meet the learning needs of many children. Even though she has strong opinions regarding public schools, DeVos has no prior experience with the public school system, as neither her, nor any of her children ever attended public schools. She is an advocate for private and charter schools, and has even helped to create some charter schools in her home state of Michigan, asserting that private and charter schools cater to a wider variety of students’ needs. However, these charter schools are the lowest-performing schools in the state. She has also caused quite a bit of controversy over the fact that her family has donated an estimated $200 million to the GOP, causing people to question the role of her wealth in the nomination. DeVos also does not support the Common Core, similar to many of Trump’s supporters.
Type to search or hit ESC to close
See all results