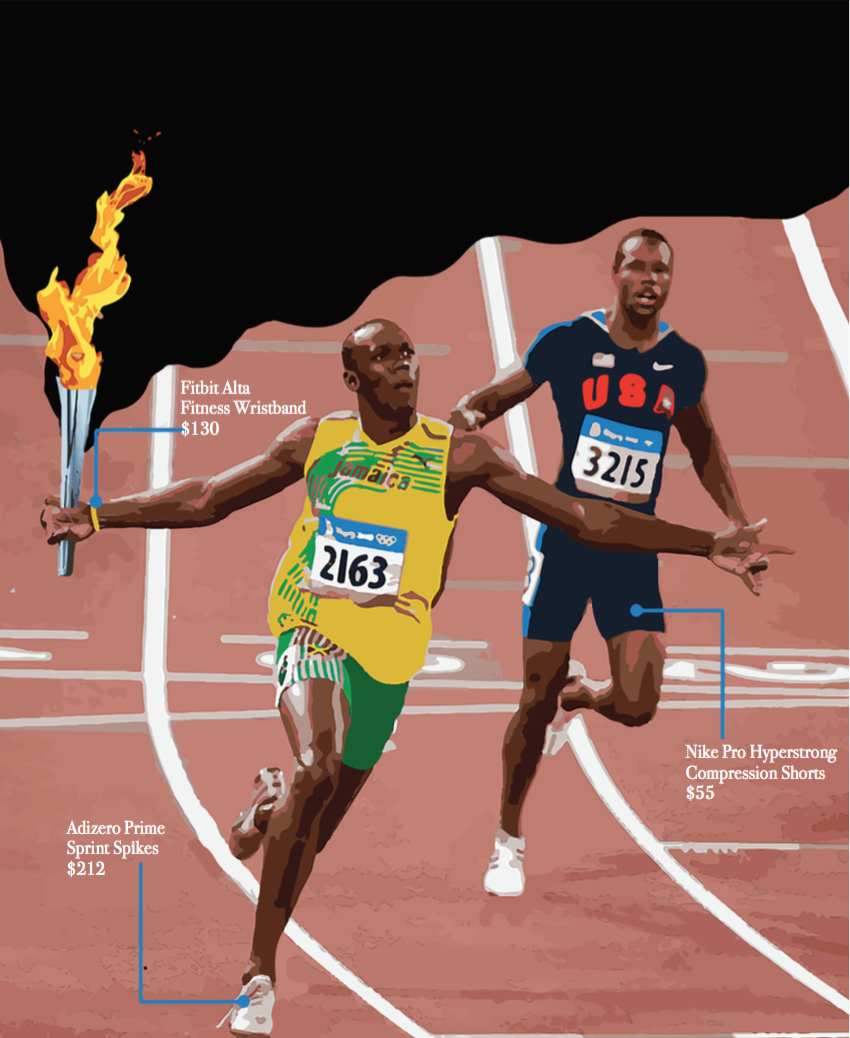 All Geared Up And Nowhere To Go

Ehecatl Rivera-Pinedo
Sports
March 1, 2017
The majority of Paly athletes are without a doubt au courant when it comes to the latest ath- letic gear, whether it be a new pair of running shoes, new tennis rack- ets or the latest Fitbit. While athletic apparel and gear/equipment can often be practical during training and per- formance, it is not what will propel an athlete to victory.e professional sporting world has consistently put an emphasis on genetics and training when it comes to developing a world class athlete. Yet amongst teens, there seems to be more stress on the importance of athletic gear. As opposed to the ama- teur sportsman, a professional who is solely working on perfecting their serve placement or shaving seconds o their 400-meter time has found athletic gear increasingly bene cial. Despite this, the athletic apparel in- dustry alone is booming and is ex- pected to generate an annual revenue $184 billion by 2020.

Let’s consider compression cloth- ing. In the past few years, compres- sion gear sales have increased ex- ponentially. According to Statista, sales of compression gear increased by approximately 170 percent from 2008 to 2010. e industry is bring- ing in copious amounts of money with the increased demand, leaving many wondering if the apparel will actually make them a better athlete.

Researchers from Australia and the U.S. have studied the e ects of com- pression shorts on running speed and have concluded that compression ap- parel does not deliver more endur- ance or speed to the wearer.

at is not to say that compres- sion apparel is impractical in other situations. For runners and cyclists, compression shorts and pants have proven to increase blood circulation in the lower legs. Doctors often pre- scribe such apparel to people with blood circulation issues. Similarly, compression gear can be extremely bene cial to professionals who train for hours on end.

In addition to their “performance benefits,” the athletic gear industry frequently attempts to appeal to the buyer aesthetically. A common mis- conception is that if you feel good, you play good. Yet motivation by athletic gear has time and time again been discredited by various studies.

Another athletic product that can be taken into consideration is the t- ness tracker. Athletes worldwide can be seen sporting the watch-like de- vice. Fitness trackers have received praise for their great motivation, pushing many to exercise. Although ubiquitous, studies have revealed that they may not work as well as they are advertised to.

“I know I’m not supposed to but sometimes I look at my watch and I realize that I’m going faster than I can sustain for the next however many miles so then I do [slow down],” said junior Maya Akkaraju. “I think that’s one of the disadvantages of the watch, because maybe if I didn’t pull back then I would be able to keep up, maybe just mentally I am restricting myself.”

A year-long study published by e Lancet Diabetes & Endocrinol- ogy revealed that tness trackers may not be as motivating as many say. e study featured 800 people who were paid a small sum of money to get moving and exercising. Some wore

Fitbits and others did not. Initially, the money seemed to work. en, for the last six months, all inducements were dropped. At this point, it was up to the athletes to keep wearing the Fitbit (40 percent had stopped using them within the rst 6 months). By the end of the study, only 10 percent of the group was still wearing their Fitbits. e study concluded that the trackers were not nearly as motivat- ing as many say they are.

For professional athletes, wearable gadgets are becoming increasingly common in the stages of training. Gadgets help athletes track useful in- formation and it is crucial for pros to use whatever cutting edge technology is available to them in order to keep up with the increasingly competitive community of athletes. Professional athletes use tness trackers to mea- sure heart rate, fatigue, sleep, body temperature and movement. Athletes use the trackers to make small but pivotal changes in their training.

“ There are some runs you want to be able to know how you feel, a run for example where your coach says I need you to go 100 percent or 70 percent and that is entirely about how you feel and how much e ort you are putting into it,” Akkaraju said. “In runs like these, it’s important to sepa- rate your run from your watch.”

In addition, Paly athletes are able connect their watches on a website called Strava. Strava acts as a social media for runners, allowing athletes to compare statistics with each other.

Gadgets such as athletic watches have proved e ective for many Paly athletes. ey utilize data collected by the device track improvement and performance. While handy, Paly track and eld coaches have asked run- ners not to use the watches. Coaches would prefer for athletes to be able to pace themselves and to be able to gauge how fast they are running with- out a device. Using the data from the watches helps athletes in some cases because it helps them to better assess the di culty of the run but after a certain point, one must be able to run on their own without the aid of the watches. In many cases, the tracker can throttle a runner back even when they should be pushing beyond what your mind or watch tells them.

For an athlete of any sport, it is important to not focus solely on ashy gear but rather on training. is is especially true for amateur athletes who are not working on in- nitesimally small adjustments in their training. For the common ath- lete, the emphasis should be on train- ing as hard and as often as possible and training without the aid of tness trackers. While the gear is useful in many occasions, it is unnecessary and does not work to motivate as much as they are believed to.