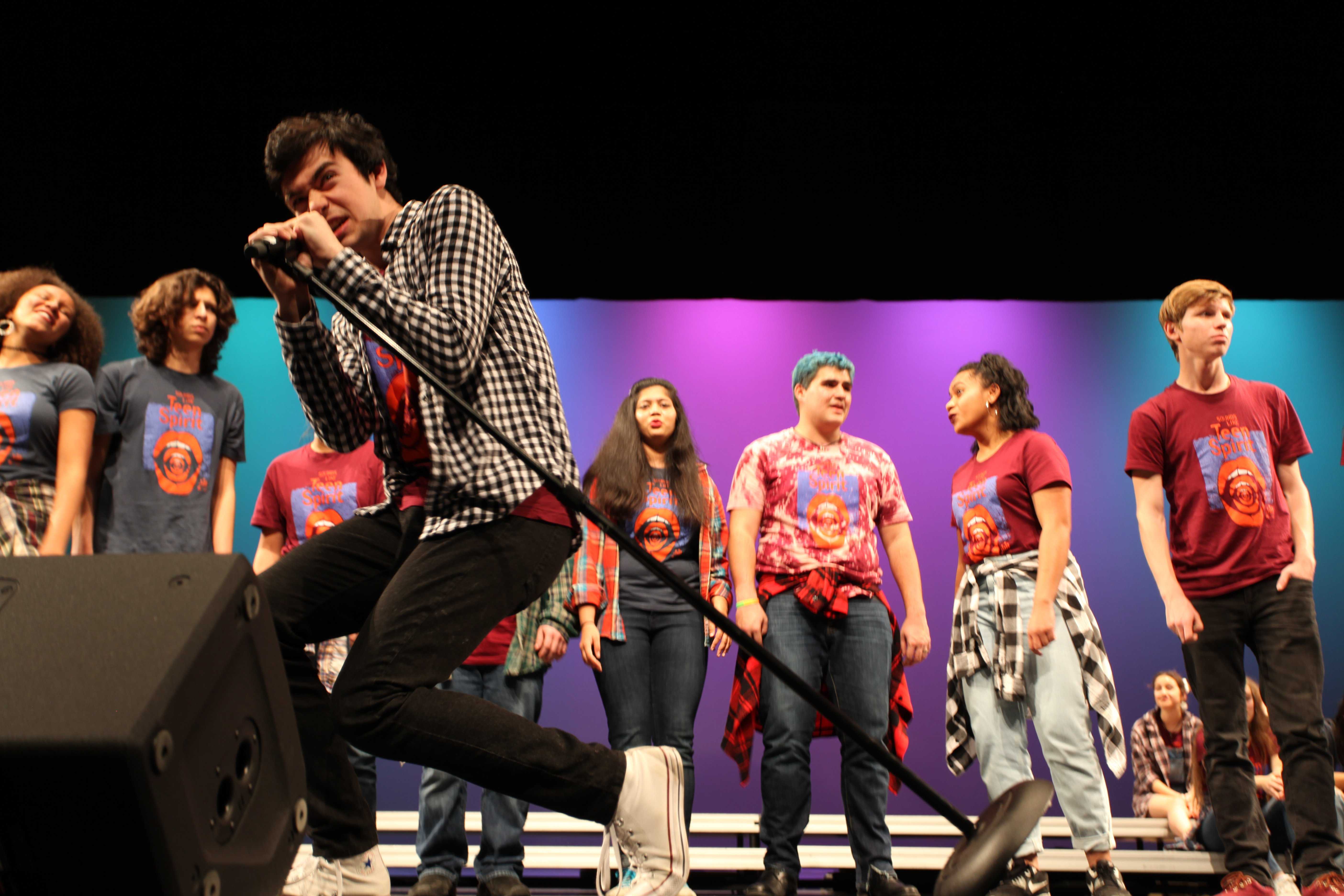 Senior Jason Pollak performs a solo in front of a packed crowd of students, parents and staff members as choir members look on.

Palo Alto High School’s choirs performed their annual Pops Concert in the Performing Arts Center (PAC) on Feb. 14 and 15. The concert, following the theme of “Sounds Like Teen Spirit,” featured songs from the ‘90s, including hits by the Backstreet Boys, NSYNC and Boyz II Men.

Held under the supervision of Paly’s choir teachers, Michael Najar and Brittney Kerby, the concert was performed by all of the choir groups at Paly: the concert choir, Madrigals, Spectrum Choir and all five acapella groups.

For the first time ever, Paly’s choir program partnered with the Rise Together Foundation, a nonprofit that helps “high achieving and low-income students that are college bound,” according to Paly principal Kim Diorio.

The foundation was founded by Laura Marcus-Bricca, a  special education teacher at Paly, and its goal is to “provide mentoring and financial assistance to low income Palo Alto High School students,” as stated on their website.

In the past 17 years, the Pops Concert only featured Paly students. This year, however, some Paly teachers were introduced into the program.

Hoping to attract more attendees by adding a teacher performance, the Pops Concert also held an auction outside of the auditorium. A percent of the proceeds earned by the concert and auction went to the Rise Together Foundation and the rest went to the Choir program at Paly.

Choir president Taylor Duncan expressed her content with the new addition to the Pops Concert.

“Having teachers perform was great because they got to see what we do and it was just fun being on stage with them. It was also great because the proceeds of this concert are going to such a great cause.”

To start off the night, Paly teachers Grant Blackburn, Brian Wilson, Kelli Hagen, Rod Satterthwaite and Elizabeth Brimhall sang “Wonderwall” by Oasis, an English band formed in the ‘90s. They also brought back Britney Spears, and sang one of her top hits, “…Baby One More Time.”

Other songs featured in the concert included “My Heart Will Go On” by Celine Dion, “Say My Name” by Destiny’s Child, “I Want It That Way” by the Backstreet Boys.

Sam Guernsey, a junior at Paly and member of the Spectrum choir, sang “No Scrubs/No Diggity” mashup with her group. It was her first Pops concert at Paly, and she was amazed as to how well it went.

“My favorite part of the concert was watching everyone who had a solo,” Guernsey said. “During choir, you usually just hear people singing in a group and it was really special to see all the soloists.”

In terms of seeing teachers perform in the next coming years, Najar is confident that it will depend on the evaluations on this year’s concert.

“I thought it was great for the campus and it was the perfect venue to gather people in the name of song,” Najar said. “If that’s what we are about and we can benefit from another cause, I want it to continue.”