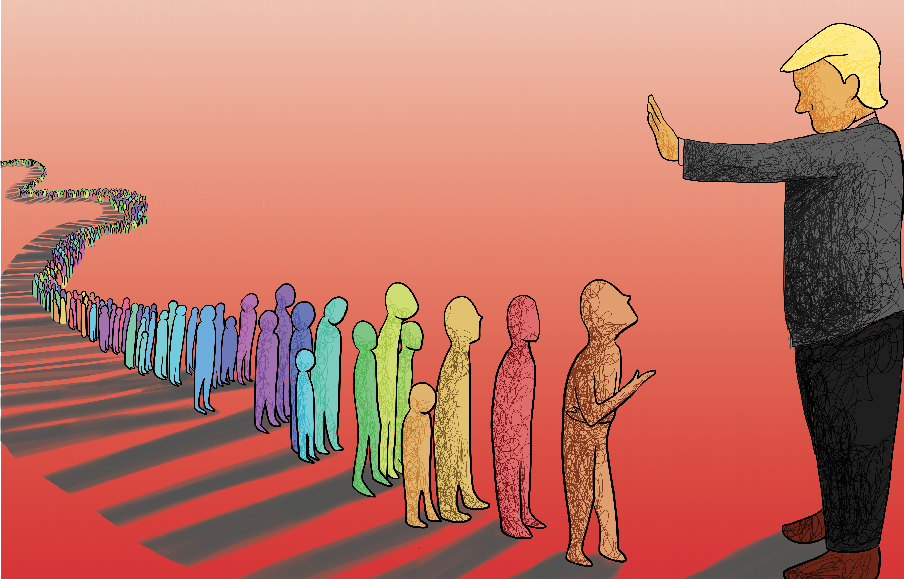 No matter which side of the political spectrum you find yourself on, it is clear that the election of Donald Trump as President of the United States has polarized our nation. This profound division between opposing parties has continued throughout Trump’s first month in office, during which he has kept busy delivering on many key campaign promises.

Among the most controversial is the President’s now-defunct immigration ban, which includes the Middle Eastern countries of Libya, Sudan, Somalia, Yemen, Iraq, Syria and Iran. The Trump administration initially placed a 90-day halt on all immigration from these selected countries, excluding U.S. citizens but including all non-citizens and even green card holders.

This initial ban was met with backlash from many in the form of protests and lawsuits — the ban was quickly repealed by the Ninth Circuit Court of Appeals. The president is currently rewriting the ban in a way which he believes will render the efforts of unelected officials, such as judges, to overturn the temporary ban, useless. According to U.S. Secretary of Homeland Security John Kelly, the new version of the ban will not bar dual citizens or green card holders from entering the United States, but will include the same seven countries.

The topic has been widely reported on by the mainstream media, but for many Palo Alto High School students, it may be difficult to identify with the different people who could be directly or indirectly affected by Trump’s intended temporary ban. In order to better inform those who fall in this group, The Campanile has collected a set of interviews with several Paly students and a Paly staff member with connections to the country of Iran. There is a strong Iranian presence at Paly and in the Bay Area which often goes unnoticed. While the opinions of these individuals do not necessarily represent the opinions of all affected Americans, they provide a unique perspective on this controversial topic.

Hana Kay is a senior at Paly whose parents both immigrated from Iran to the U.S. when they were 18 years old, during the Iranian revolution. Neither spoke proficient English upon arrival, but now, they are “virtually indistinguishable from any other American” according to Kay. Despite her parents’ successful assimilation, Kay emphasized that her ties to Iranian culture are still strong. She celebrates Persian holidays, has visited Iran and learned Farsi before English.

Kay’s connection to the country is strong, and her perspective on the ban is largely influenced by her roots.

“I don’t believe that [a] ban makes Americans more safe…even if this immigration ban was in place before 9/11, the attacks would not have been prevented.”

As for Trump’s rumored alterations to the ban, Kay insists that they will not change her opinion on the matter. Kay also feels that such a ban would make her less accepted in America.

“I feel like a scapegoat to a small extent,” Kay said.

Overall, Kay has a similar perspective to many Palo Altans, but her personal connection intensifies her stance.

“I understand and feel the repercussions of the situation a lot more,” Kay said.

Shahram Tayyebi is a senior at Paly who also has connections to Iran.

“My dad is from [a town] outside of Shiraz,” Tayyebi said. “Lots of his immediate family still lives there.”

According to Tayyebi, his father frequently visits to take care of his parents, and to help family members obtain educations. Tayyebi’s view on the ban’s effect on safety in the United States is that it has little effect.

“While terrorism is an issue, the actual proportion of Middle Easterners who commit acts [of terror] is very small,” Tayyebi said.

Tayebbi believes that security issues could be solved through implementing increased airport security rather than a blanket immigration ban.

“A small increase in security could help a lot,” Tayyebi said.

Overall, despite the proposed ban Tayebi feels very comfortable in his home town and the Bay Area in general, but admits that he is overall somewhat uncomfortable with the proposal.

John Tayeri is a sophomore at Paly with cultural ties to Iran through his father, uncle and grandparents, who all immigrated to the United States several decades ago.

Before Tayeri visited Iran for the first time, he was anxious in a way reminiscent to those who support the immigration ban.

“People in general make the Middle East sound like a constant war zone where all the people are unfriendly. To my surprise, everyone in Iran was so nice to me and my family.”

Through this experience, Tayeri exemplifies the idea that people fear things they do not know, and when they take the time to understand they can oftentimes be pleasantly surprised. Tayeri, although starkly against the immigration ban, believes that the more broad issue in the Middle East is the government.

“The people may be nice, but other aspects like corrupt governments and terrorism make working class citizens look bad,” Tayeri said.

In his own words, “It keeps incoming families with dreams out of America.”

While Tayeri acknowledges that the there may be Muslim terrorists, he insists that this cannot dictate foreign policy.

Shahram Mostarshed, a first-year Physics teacher at Paly, has not lived in Iran in over 40 years, but continues to speak Farsi with his parents and celebrates Persian holidays such as the Persian new year in order to maintain his connection to Iranian culture.

His views on the immigration ban are extremely straightforward, and mostly align with those of the left wing. His first objection is that the ban is baseless.

“There is zero evidence that anyone from [the] proposed banned countries have ever committed any act of terrorism in America,” Mostarshed said.

Mostarshed believes this alone is enough to reject the premise of the ban, but also believes that President Trump’s motivation for the ban is problematic.

“The President stated that he’s looking for a way to ban Muslims, which is unconstitutional,” Mostarshed said.

Unlike some of the other Iranians featured, Mothershed believes his views on the ban, not his heritage, have the largest effect on his treatment in certain less liberal areas.

“I am just about as unwelcome in Trump country as any other liberal.”

Despite the current turmoil between Iran and the U.S.,  he is optimistic that relations will improve in the long term.

“Iran is the only non-Arab country in the Middle East besides Israel whose population is overwhelmingly pro-American,” Mostarshed said.

Each of the interviewees made it clear that they did not support the implementation of a temporary immigration ban. These opinions, although unique in perspective, ultimately reflect of the liberal agenda and the majority of Palo Alto identically. Although the future of the immigration ban is unclear, it will surely face  some opposition.